Air Force Academy is a newcomer 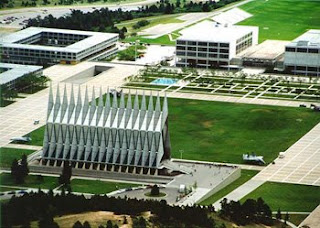 In the scheme of things, the Air Force Academy really is a virtual newcomer to this area. Selected as the architect of the massive undertaking, the firm (actually a joint venture of several companies) of Skidmore, Owings and Merrill, was not even awarded the contract for the project until July 23, 1954, according to author Steven A. Simon in “The Building of the Air Force Academy,” an article appearing the special publication celebrating 50 years of the Academy. Most of the now well-known buildings on the 18,455-acre military reservation were built in the mid- to late 1950s.
But what came before?
As early as 1860, lumber concerns began appearing in an area later to be known as Husted. In what is now located just about at the North entrance of the Academy, Calvin R. Husted built a sawmill, and by the late 1860s, nearly 200 people lived nearby as the town with many businesses, a church and even a newspaper (Husted Banner) developed around the mill.
“Husted operated the mill for many years. Calvin Husted was one of the earliest county commissioners in El Paso County. He was known as a generous man; during his prosperous years he was said to have given many a handout and grubstake. He died in the poorhouse in Colorado Springs,” wrote Perry Eberhart in Ghosts of the Colorado Plains.
Eventually the sawmill was abandoned but the town survived for years as a shipping point for ranches in the area. The buildings disappeared little by little over the years.
“One of the oldest was the Branding Iron café; It became a saloon, then a store, then a post office, and finally a church. The service station and store closed in 1956. The last signs of Husted were completely destroyed with the construction of the Academy and the U.S. 85-87 freeway,” wrote Eberhart.
But prior to then, the little burg had an interesting run. There was even a West Husted and East Husted separated by Monument Creek and positioned alternately near the Rio Grande tracks and the Santa Fe tracks. And at one time the D & R.G. maintained a roundhouse or turntable in West Husted.
“The steam trains had power to pull the freight and passenger trains from Colorado Springs to Husted, but not enough power to pull the steep grade to Palmer Lake to the ‘Divide,’ therefore extra helper engines and crews were kept at Husted,” wrote local historian Lucille Lavelett.
It was an area known for train tragedies as well. Rock Island and Rio Grande trains collided head-on near there in 1888 killing only two people but another wreck in 1909 took the lives of seven and injured nearly 60 people.
Interestingly enough, there was also an early airport there.
“An unwitting precursor to the area’s eventual grand purpose, a small airport and flying school were built in the late 1930s on land currently used for cadet airmanship operations. In fact, Charles Lindbergh rented a plane and flew from this location while a member of the Academy Site Selection Commission,” Simon says.
Additionally, in the canyons west of Husted, bootleg whiskey stills proliferated during Prohibition and cattle rustlers, horse thieves and other undesirables were reportedly hanged in nearby Deadman’s Canyon, thereby giving it that rather dubious namesake.
Fox farms operated near there in 1930s, and former Governor Oliver Shoup owned the Cathedral Rock ranch not far from Husted on what is now Academy land.
Other towns at one time existed on or close to what is now the military reservation. Among them, Pring Siding, Edgerton, Monument Station (on the south end of the Academy), Henry, Borst, and Stanley Camp to name a few. But they each have unique stories of their own.
The Burgess Ranch Cabin, constructed in 1869-1870 by William A. Burgess, remains today in the Douglas Valley housing area on the Academy. It is one of the oldest remaining buildings in the Pikes Peak region and is on the National Register of Historic Places. Three small lodges built in 1929 also remain standing close by.
###
Posted by ___ Restless Native at 8:28 PM