All roads lead to Walter Paris 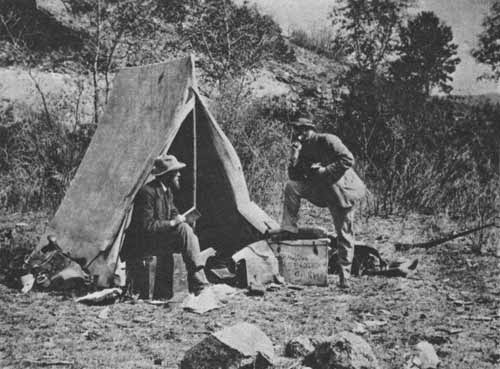 By 1873, Walter Paris was painting water color sketches in around the Pikes Peak region

Art and the ice business, Palmer Lake and Cripple Creek, Professor Ferdinand Hayden and the U.S. Government Geological Survey, local architecture, and Rudyard Kipling's Nobel Prize for Literature   ...  all roads lead to Paris.
Walter Paris, that is. He arrived in the Pikes Peak area in the Summer of 1873.  In his youth, Paris, an esteemed English-trained architect had been appointed assistant architect in Bombay, by the English government. He had befriended John Lockwood Kipling, who was professor at the Bombay School of Art, at the time.
"One morning December of 1865, John Kipling rushed over to Paris' bungalow to announce that his wife had given birth to a 12-pound boy. A few days later, Paris went to see the infant and help him in his arms. The infant's name was Rudyard Kipling, who grew up to be one of the most famous British writers in India and the winner of the Nobel Prize for Literature 1907. Paris maintained a friendship with the Kiplings and their son, and by 1899, when Rudyard Kipling was living in Vermont, Paris rightfully consider himself Kipling's oldest, friend," writes Palmer Lake historian Daniel W. Edwards in a historical paper for the Palmer Lake Historical Society in July of 2010.
By 1873, Walter Paris was painting water color sketches in around the Pikes Peak region. He continued to design buildings in Colorado, including an office building on Tejon Street in Colorado Springs, and a school in west Denver, but also set in motion plans for an Ice House near Divide Lake in northern El Paso County.
Divide Lake (later rechristened Palmer Lake) was leased from the railroad and Paris built an ice house there that could store 2,000 tons of ice to be sold in Denver, Colorado Springs and Pueblo.
Paris and W.S. Hannaford established the Fountain Ice Company and purchased existing ice houses in Colorado Springs and Manitou.
"The company's ice house at Palmer Lake was completed by the end of 1873, and there is one tantalizing reference to Paris sending carpenters to build, if not the beginnings of town, at least some houses at Divide Lake where workers at his plant could spend the winter. If Paris did construct housing facilities, it indicates there was a small settlement at the future site of Palmer Lake long before Thompson began his development efforts in 1883," writes Dan Edwards.
Paris joined the Prof. Ferdinand Hayden's U.S. Geological Survey team that documented first intoYellowstone region of Wyoming in the early 1870s was working as an artist for the survey in the fall of 1874.
"Mr. Walter Paris, who has been accompanying Professor Hayden's party in their trip northward from Colorado Springs, along the base of the mountains, has made a number of sketches of scenery in Pleasant Park and other localities along the route, and extends and invitation to our citizens to call at his studio and look them over," reported the Colorado Springs Gazette on Oct. 24, 1874.
But he became restless. In January 1875, Paris wrote to Hayden in Washington, at the time.
"I feel that a reputation is not to be gained in an out-of-the-way place like Colorado Springs, and the best plan to make one's self known is to come East and exhibit my works, and should I succeed in getting commissions to paint views of this part of country I can come West in May or June next..."
He did so by March of that year as reported in Washington papers but still had not sold all of his property in Colorado as late as 1881, when records show as owner of an ice house and nine acres of land in Colorado Springs.
Paris returned to Colorado several times in the ensuing years and sketched a number of scenes in and around Cripple Creek in 1892.
"Mr. Walter Paris has returned from Cripple Creek bringing with him some excellent sketches of the town from various points in the vicinity and two water colors of mountain scenery. He also has a very vigorous sketch the main street while the fire was in progress Wednesday night," reported the Colorado Springs paper.
Described as "a large man, broad-shoulders, well-built, and wore a mustache and full beard squarely cut," in the Dictionary of American Biography, he seemed to be well-connected here in the U.S. and his native England, in fact attending a White House reception hosted by President Theodore Roosevelt in 1905. He died in Washington in November of 1906 at the age of 54 from the effects of a stroke.
"He had a dignity which verged on pomposity and was slow and heavy in movement and speech, and latter distinctly British in accent... Of his own work and attainments he held high opinion, and not infrequently frankly expressed, and he was intolerant of criticism, but this characteristic also may been only the armor worn to protect a supersensitive nature," according to the Dictionary of American Biography. 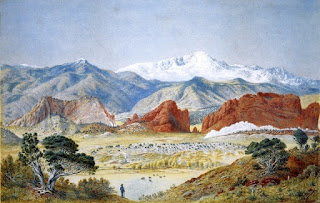 Photo caption 1: Ferdinand V. Hayden (left), who led the 1871 expedition of Yellowstone, talks with his assistant Walter Paris.
Photo caption 2: Traditional artwork of Pikes Peak and Garden of the Gods by Walter Paris.

No surprise: Rough Riders heroes of a specific past 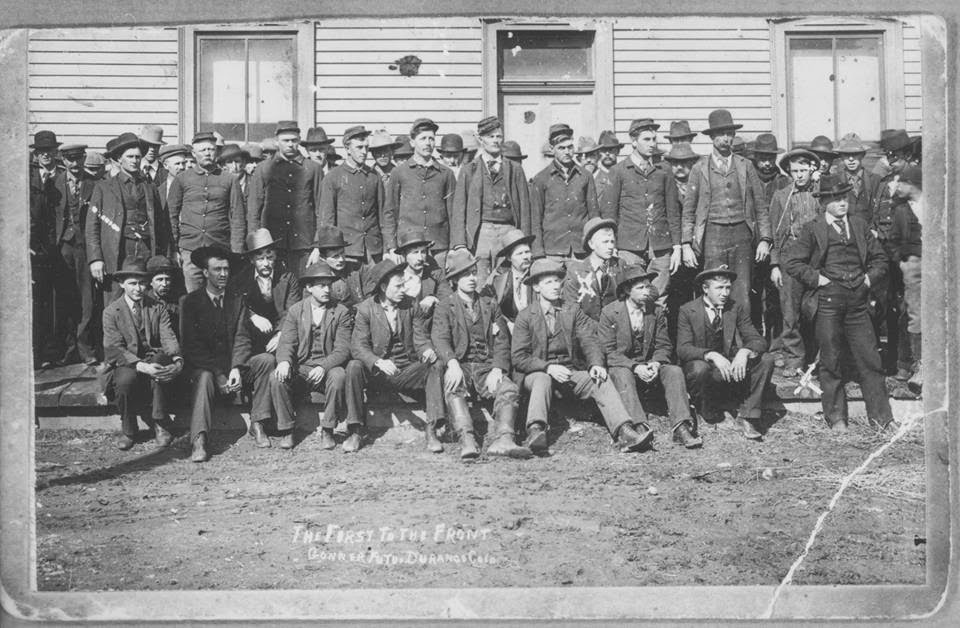 The whole town considered him a fragment of their own history

When a kid, looking through the portraits of U.S. Presidents, naturally picks out one he identifies with, it's no surprise. There is a fellow, wide-faced, bespectacled, with a barrel chest, bushy mustache, and remember, a cowboy countenance ...

I came by my interest in Theodore Roosevelt, quite naturally.

Dolores cowboys James E. Akin and William H. Brumley, Jr. were both in Troop G, and Carl John Scharnhorst (or Schornhorst in some muster info), Jr., who served first in Troop F, then transferred to Troop I in San Antonio.

When American newspapers cried out, "Remember the Maine! To Hell with Spain," the boys from Dolores, along with group from Durango, and Theodore Roosevelt, serving at the time as assistant secretary of the Navy, dropped everything to heed the call. Roosevelt resigned his office on May 6, 1898 — the day he secured a commission — and set about putting together a calvary regiment to lead into battle.

Most of the members of G Troop were from the New Mexico Territory, a total of 37. The second most prolific state was Illinois with 12. Other states represented include Texas, Arizona, Missouri, New York, Massachusetts, the Indian Territory, Louisiana, Kansas, Iowa, North Dakota, Michigan, Colorado, New Jersey, Kentucky, California, West Virginia and Nebraska. Most all enlisted at Santa Fe in early May, 1898, and were to receive their training at San Antonio which was selected as the training center for the 1st US Vol. Cavalry.

Colonel Wood arrived in San Antonio on Thursday, May 5, 1898. The contingent from New Mexico arrived on May 10. For the time being they were quartered in the Exposition Hall near the center of the fairgrounds. On May 11, Colonel Wood announced that there would be three squadrons of four troops each. Each troop would contain 65 but later was increased.

On May 12, the regiment was taken on a long extended drill of marching several miles from camp and over two hours of drill. Squadron drill came in the afternoon, followed by first regimental drill formation. On May 14, G Troop was issued their Krag Model 1896 carbine.

Roosevelt, by his monied connections and notable influence, had made that happen, as well, by "hurrying up the different bureaus and telegraphing my various railroad friends, so as to insure our getting carbines, saddles and uniforms that we needed from the various armories and storehouses," as he wrote in his book, "Rough Riders."

May 18, had the excitement of the demonstration of a new weapon, Colt’s rapid fire guns. These guns could fire 500 rounds per minute. On May 19, tents arrived at the camp. These were dog tents consisting of two pieces four feet wide, and six-and-a-half feet long, buttoned together over a ridge pole about three feet high.

Drill continued all through May. The heat was punishing with several of the Rough Riders suffering its effects, but they continued to drill. May 29 reveille sounded at 3 a.m., an hour earlier than usual. By 9 a.m., the regiment was on their way to the stockyards to load on the waiting trains.

The Rough Riders reached Tampa June 2. Not having enough transport ships, the Rough Riders would go as dismounted cavalry. They would operate as infantry while in Cuba.

G Troop would travel to Cuba on the transport ship the "Yucatan" and arrive at Daiquiri on June 22. The landing at Daiquiri was unopposed. Any Spanish in the area had already took off toward Santiago.

Llewellyn had previously served as Indian Agent on Mescalero Apache Reservation in southern New Mexico. He soon became one of the few agents who considered the welfare of his charges, worked for their betterment, subjected them to discipline and won their respect. He organized an Indian police force and strove to bring the lawless situation on the reservation under control. Going hunting with them, the Mescaleros called him “Tata Crooked Nose”.

In 1883 he also became agent for the Jicarilla Apaches and supervised their transfer to the Mescalero reservation. Later he established an Indian boarding school, added a doctor to the agency staff and had the Indians join the Cattle Growers Association.

In Cuba Captain Llewellyn was credited with an important contribution to the American victory in the battle for a hill at San Juan. Dubbed “Kettle Hill”, a sentry named Ralph McFie had been posted for night duty, when he heard the stirrings of Spanish troops moving into position. Retreating to his own lines he was intercepted by Captain Llewellyn. McFie was also from Las Cruces and Llewellyn knew him well. The Captain lost no time to notify headquarters, causing the promoted Colonel Roosevelt to order an early counterattack that went into history as the celebrated charge of San Juan Heights.

McFie’s vigilance and Llewellyn’s prompt action earned the latter a promotion to Major. The campaign also caused him to contract yellow fever and put him into the Presbyterian Hospital in New York City.

As Roosevelt’s comrade-in-arms on San Juan Heights, Llewellyn returned to Las Cruces as something of a war hero.

Since the 1890’s Llewellyn had been a member of the New Mexico Territorial Militia, and when he was appointed Judge Advocate General of the New Mexico National Guard, he was promoted to Colonel. He also was active since at least 1899 in New Mexico’s long drawn out struggle for statehood, in fact serving as Speaker of the House in the Territorial Legislature. He served in the Constitutional Convention of 1910 and in November 1911, was chosen a member of New Mexico’s first state legislature, where he represented Dona Ana County.

President Roosevelt never lost his affection for his battle buddies and appointed them to important political offices whenever the opportunity presented itself. Among his special friends was Colonel William H. H. Llewellyn of Las Cruces, New Mexico, who was close enough to the President to dine with him at the White House, to escort Mrs. Roosevelt to the Theater, and who is one of the few 1st Calvary soldiers the President mentions in his autobiography.

I picked out the 26th President of the United States, Theodore Roosevelt, Jr., as a kid, because I identified with him. And the whole town consider him a fragment of our history. We came by it quite naturally. And it is no surprise. 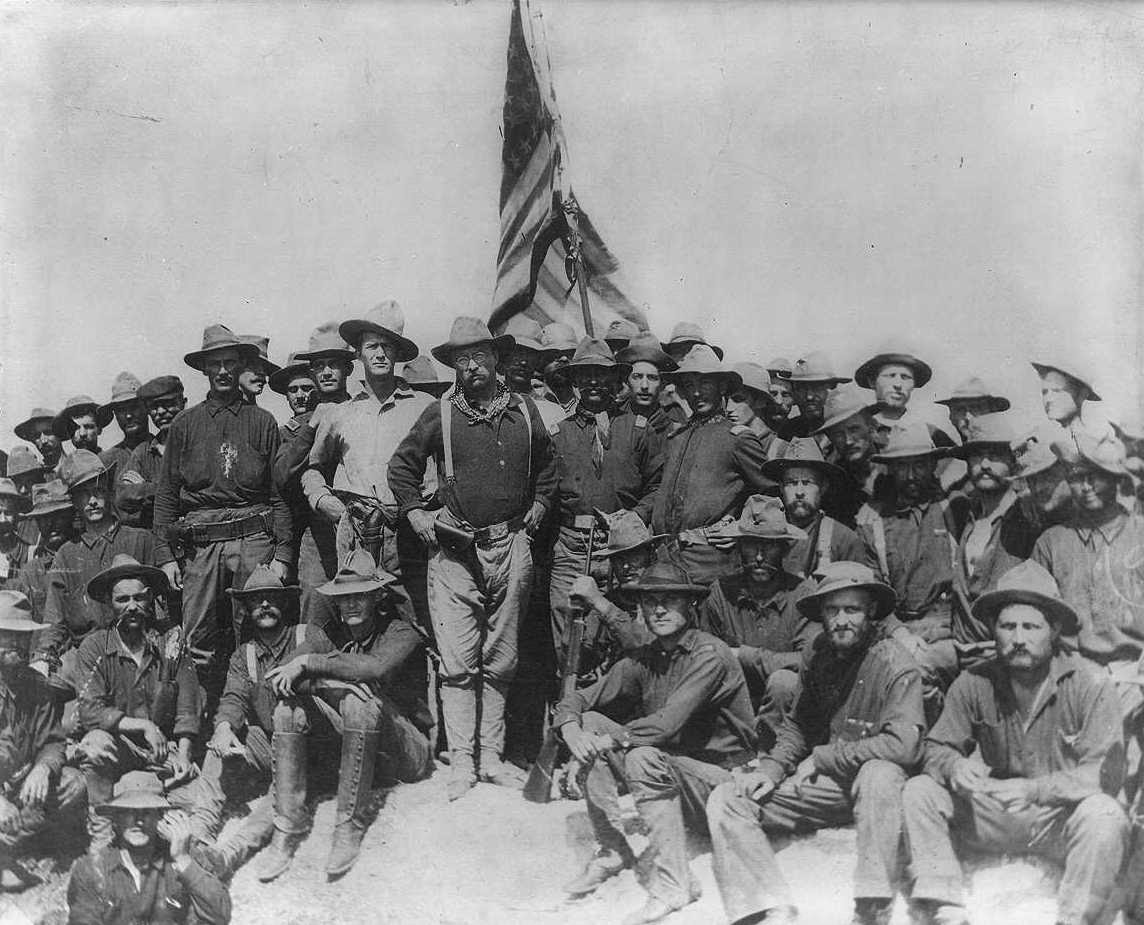