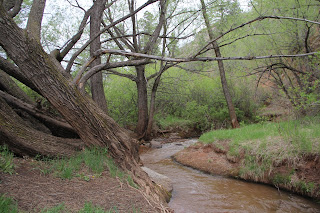 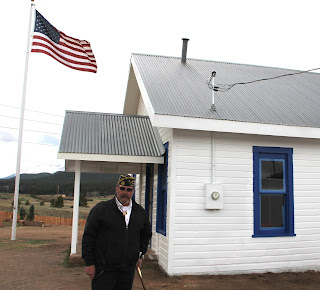 Tennessee Williams wrote, “Life is all memory, except for one present moment that goes by so quick you hardly catch it going.”

With Memorial Day right around the corner, it is appropriate we pay tribute.
The recent renovation of the Veteran's Hall in Woodland Park ceremony this last week, local Veteran's organizations efforts and volunteers from all over the country call particular attention to the last Monday in May, and throughout the years in perpetuity, for those who served.
"What today is known as Veterans Hall was originally built in 1935 by the Manitou Park Grange.  Located just north of the Shining Mountain golf course the building has been used by various community groups for meetings and various activities.  2001 the building was purchased by the Veterans of Foreign Wars (VFW) Post 6051 of Woodland Park with the stipulation that the memorabilia left by the Grange remain so that if they wished to use the facility again they could.  The facility is now used by both the VFW and American Legion Post 1980 of Woodland Park," says Larry Ingram, of the American Legion Post 1980.
"In 2015 a grant was received from the Home Depot Foundation for the renovation of the facility.  This grant not only funded the lumber, paint, sheetrock, wiring and fixtures necessary modernize the facility, but also organized volunteers that are employees of Home Depot and their vendors to do the work.  The renovation was coordinated by D.M.I Builders contracting company.  Over 170 volunteers worked on the renovation which began April 11, and was completed May 11, when a dedication ceremony was held by the VFW and American Legion Post 1980," Ingram said.
Andy Tyler, Post Commander for VFW Post 6051, was visibly proud of all they had been able to to accomplish recently, the last few weeks, and over the last year, in efforts to secure funding and make the project a reality. As he showed me around the facility Wednesday, he pointed out new paint, exterior flower boxes, interior walls, restored bathrooms, tools, and equipment and even a house-warming gift of a combination smoker/barbecue presented by Team Depot, the Home Depot crew.
Gabe Sneller, Team Depot-Western Division Manager, was gracious on his own, thanking the Veteran group's members and leadership in pulling the project together, as well as for their service to the country.
"The Thomas E. Kelly VFW Post 6051 was originally located off U.S. Highway 24 on Bluebird Hill where the Pikes Peak Regional Hospital now stands. After the post sold its property there, it purchased the Grange hall and the land from the Phillips family, who were caretakers of the Grange hall after the chapter closed down and had been sitting vacant for approximately 10 years," wrote Tyler, in a preparation of the building history.
"It was stipulated in the mortgage agreement to retain all the Grange items in the event that the local Grange #430 stood back up. The VFW and the American Legion are now the caretakers of the many historical items found in the building that show the growth of Woodland Park over the years," Tyler says.
"The hall has been renamed the Veterans Hall, as it now supports both the local VFW and American Legion Posts. It also provides a meeting place for other organizations within the Woodland Park community," he said.
"In 2002, the Veterans Hall was a staging area for fire crews battling the Hayman Fire which burned 133 homes, 138,114 acres, and forced the evacuation 5,300 people."
The local VFW post, and Legion organization collectively provides color guards throughout the year at area events and encompasses about 50 local members in the VFW, and about 130 in the American Legion Post, Tyler said. It assists local homeless veterans through the Aspen Mine Center, provides scholarship opportunities through Voice of Democracy and Patriot's Pen programs, conducts Memorial Day activities.
According to usmemorialday.org, “Memorial Day was officially proclaimed on May 5, 1868 by General John Logan, national commander of the Grand Army of the Republic, in his General Order No. 11, and was first observed on 30 May 1868, when flowers were placed on the graves of Union and Confederate soldiers at Arlington National Cemetery.”
Memories, of course can divide as much as they bring together. But coming together and sharing the struggle was eventually possible.
“The first state to officially recognize the holiday was New York in 1873. By 1890 it was recognized by all the northern states. The South refused to acknowledge the day, honoring their dead on separate days until after World War I...
It is now celebrated in almost every state on the last Monday in May (passed by Congress with the National Holiday Act, P.L. 90-363, in 1971 to ensure a three day weekend for Federal holidays.)”
We can all take to heart in the collective memory, contributions, and recent  accomplishments, of area veterans and volunteers as we pause in tribute this upcoming Memorial Day.
### 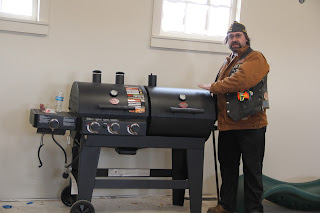 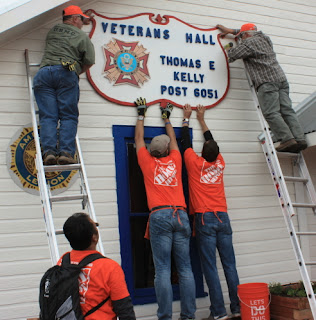 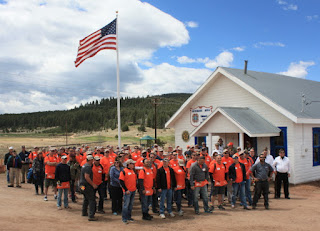 Photo 1:
Andy Tyler, VFW Post Commander,  provided the short tour of all the improvements achieved in the last few months at the renovated Veterans Hall.
Photo by Rob Carrigan.

Photo 3:
Volunteers restore the sign on the front of the Veterans Hall.
Photo by Larry Ingram.

Photo 4:
More than 170 volunteers worked on the renovation which began April 11 and celebrated at a dedication ceremony held May 11, by the VFW and American Legion Post 1980.
Photo by Larry Ingram. 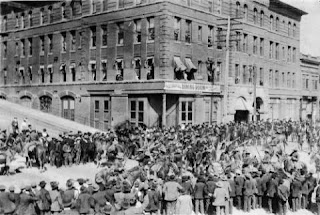 Just because we are paranoid, doesn't mean they weren't out to get us.

There is a strong tradition of anti-Irish sentiment, known as Hibernphobia, that predates the "an Gorta Mor" or "The Great Hunger." It has led to fighting and sectarianism and cultural discrimination of Irish emigrants and their descendants for about 1,000 years now.  The "Troubles," "Bloody Sunday," and "No Irish Need Apply," are some of its manifestations.
But just because we are paranoid, doesn't mean they weren't out to get us.
"At the extremes of the debate, the famine has been described as an unavoidable tragedy caused by the destruction of the Irish Potato crop by a sudden infestation of late blight, a disease of potatoes that had spread from continental Europe, or, alternatively, as an attempt by the British government to use the crisis as means of destroying the Catholic culture of the west of Ireland in what amounts to a case of genocide," writes Bill Price in his popular book, "Fifty Foods that Changed the Course of History."
Irish immigrants arrived in Colorado with the discovery of gold in the late 1850’s. Many, fleeing the potato famine on the "old sod,"  they came to Colorado as miners or railroad workers calling themselves "terriers." They settled in the mining camps seeking a better life and freedom from the discrimination they experienced in eastern cities.
By the early 1860s, the Irish comprised one of the state’s largest and most visible immigrant groups. In the mining camp of Leadville, for example, they represented nearly 20 percent of the population.
"In the 1870 Census for Denver, 60 percent of Irish men are listed as common laborers, while 70 percent of the single Irish women are listed as domestic servants. Hibernians in early Colorado lifted, hauled, dug, fought, cleaned fed and scrubbed. They were the sweat, blood and muscle of an expanding American empire, extracting precious metals, laying new roads of iron and steel, and tending to the needs of the privileged," writes Dennis Gallagher, Tom Noel, and Jim Walsh in the introduction of their book "Irish Denver."
"Most of early Colorado's Irish miners migrated though other mining communities such as the copper mines of the Beara Peninsula in western County Cork, the Pennsylvania anthracite coal region, and copper country of Michigan's Upper Peninsula. Others mined regions in Scotland and England before moving to Colorado. Many of Colorado's Celts came via Canada," says Irish Denver.
"By 1880, Leadville boasted nearly 3,000 Irish-born residents and a sizable number of Irish Americans who had migrated from North American mining areas," wrote James Walsh in a recent History Colorado piece for Colorado Heritage magazine.
"Leadville became the most Irish place in Colorado and one of the most Irish places in the United States," according to Walsh.
The miners' union, led by twenty-eight-year-old, Dublin-born Michael Mooney, quickly shut down Leadville's silver mining operations when they walked off the job in May 1880, to protest low pay, unsafe conditions and a new rule that banned miners from talking while they worked.
The backlash was severe and immediate.
"Nearly all of Colorado's newspapers declared the strikers were members of the legendary "Molly Maguires," a secret society of Irish tenant farmers that was said to have been responsible for the murders of several mining executives and other professionals in the Pennsylvania's anthracite coal region during the 1860s and 1870s," Walsh says.
The strike and the resultant hysteria led Governor Frederick Walker Pitkin to declare martial law less than two weeks later in Leadville, even though no violence preceded the declaration. More than 250 miners were arrested by Colorado National Guard troops and others. They were then forced at gunpoint to build roads on chain gangs. Similar tactics were used again in Leadville in 1896 and 1897 to break up another strike of the Western Federation of Miners. The incident ultimately led to resisting Irish miners being killed and buried in secret graves.
"Hibernian miners led two major Western Federation of Miners strikes in Cripple Creek. Irish American John C. Sullivan led the Denver-based Colorado Federation of Labor during the 1903-1904 Cripple Creek Strike. Mother Mary Jones was jailed in Trinidad, Colorado, when she became active in support of the striking coal miners and families during the time of the Ludlow Massacre," notes "Irish Denver."
Irish miner Vincent St. John is memorialized in Telluride Miner Memorial. The young man who, as president of Telluride's WFM Local 63, led the miners to victory in 1901, gaining the everlasting enmity of the mining corporations, was the son of an Irish immigrant, Marian "Mary" Cecilia Magee, and New York native, Silas St. John.
In other example of anti Catholic, and anti-Irish sentiment, when a fire broke out in Cripple Creek on April 25, 1896; it had apparently started in a brothel in the Myers Avenue red light district during a dispute regarding customer service. That fire was extinguished, but another, more devastating fire broke out four days later and burned most of Cripple Creek.

A member of the American Protective Association took advantage of that second fire by attempting to dynamite St. Nicholas Hospital and rid Cripple Creek of its Roman Catholic institution. He did some damage to the hospital kitchen, but he also blew off his own leg.
Sister Mary Veronica Sinnott and the other Sisters of Mercy moved him and their other patients to Dr. Whiting's hospital, where they nursed the bomber back to health, for which he was reported to have been grateful.
Many Irish women were among the Sisters of Charity of Leavenworth, the Sisters of Mercy, and the Sisters of Loretto, who served the needy and built hospitals (many of them in mining camps) around the state.
"Like other major American cities, Denver had a strong Irish political presence. Families like the Carrigans, Currigans, and McNichols have served the state and the city in many capacities, as have renowned early politicians such as John A. Carroll, Edward Costigan, Edward Keating, Robert Morris, and Thomas Patterson. More recently, such figures as Joan Fitzgerald, Dennis Gallagher, Cary Kennedy, Mitch Morrissey, Mary Mullarkey, and Bill Owens have continued this long tradition of Irish political involvement."
More than three million people in Ireland were entirely dependent on the potato, and the failure of the crop left them destitute. About a million Irish perished in the famine, and another million emigrated during a five year period then. About 72 percent of the Irish population is Catholic.
May is generally the driest month of the year in Ireland. 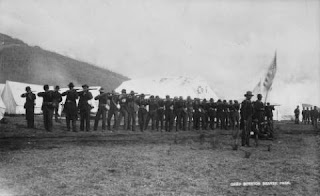