Life, death, and windows to the soul 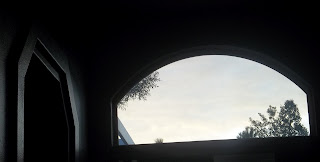 I have been trained to notice things.  And remember, ... to tell others.
• • •
The Grackles (green-hooded blackbirds) seem to swarm in the fall, diving in groups, and taking advantage of the remaining warm days to play among the still-leafy trees. They dine on acorns in the Gambel oak and hundreds ascend up into the clouds and then swiftly swoop low near buildings and trees, twisting and turning as a group, high in the air and then right back above the ground’s surface, turning on a dime. Dodging in and out under the eves of buildings, and then through under the power poles.
The clean glass in the window presents a problem.
It looks like a secret passage, in under the roof, as the light shines through. But at 35 miles per hour, it is deadly.
Swoop, turn, weave, climb, angle, bank, swoop, turn … THUD!
I was watching them from the back window when I heard one of them hit the large windows. My daughter was right there at the window when it hit.
“Did a bird just hit the window?” I asked.
She had an unpleasant look on her face. Like she was almost to cry, or be sick.
“It hit, and it is still alive in the grass out there,” she observed.
I better go take a look, I thought, and went through the garage to get gloves and a shovel.
Sure enough, it was still alive, but not doing so well. Blood near its beak, and it had  an addled look to it. Misty eyes, pain, maybe? And confusion.
“What are you doing?” she opened the door and asked, as I picked up in the shovel and started to carry it around to the side yard. Out of her view, near the deadly window.
“I think I am going to have to kill it,” I stammered. “The dogs or the cats will get it, if I don’t, and I don’t think it will ever be right again.”
I looked at its eyes again -- and the fact that I was able to slide the shovel under it, and carry it some distance with no movement – well, it would never be right again.
But, still. My daughter thought I was wrong.
I knew I was not, and asked her to go back inside.
Out of her vision, in the green grass of the side yard, I took another look at the foggy eyes of the addled bird, and knew what I had to do.
As hard, and as high as I could, I swung the heavy irrigation shovel directly at the bird lying in green grass.
That ended it, at least for the foggy-eyed bird.
• • •
Of the Shoshone, no one can remember exactly how it came to be.
Black bears say that Wakini was just feeding at an ant hill, when Wakinu, strong, grey grizzly, came to him and rudely stuck his paw in the ant hill as well.
A great fight ensued, with grey and black hairs flying on every side. Black bear Wakini was, to some's surprise, victorious.Wakini was, by natural law of course, in the right, for no animal may ever touch another's prey.
Wakinu, like a defeated warrior, was forced to leave forever.
Wakinu wailed and lamented, but the tribe's laws are inexorable. And so, he had to go, one last time wading through familiar streams, taking a last look at the familiar pines, and saying farewell to the valley he had lived in all of his life.
He could not see for tears, and so he failed to notice that he was making straight for the Snow Country. Suddenly he fell into a deep snowdrift. Clambering out with difficulty, he wiped his eyes and took a look round.
There was nothing but white, unblemished snow everywhere.
"I'm sure to find a trail soon," the bear said to himself, and set out on his way once more. His grey coat had turned completely white with the snow, ice, and bitter wind.
But Wakinu took no notice of anything and walked on and on, until he reached a strange land in which a deep, frosty night reigned supreme. Somewhere in the far distance the gale could still be heard, yet here there was no but that made by his own footfalls on the frozen snow.
Above him glowed the night sky, while not far away, on the very fringe of the Snow Country and the heavens, a broad white trail could be seen ascending the sky.
Wakinu ran, hardly touching the ground, mesmerized by that gleaming trail. Another leap, and he found himself in the air, shaking the snow from his coat; light as a feather, he soared up and up.
The animals who were awake that night saw, for the first time, a wide white trail in the sky, and on it -- a grey bear.
"Wakinu has found the Bridge of the Dead Souls and is on his way to the Eternal Hunting-grounds," said the wise black bear Wakini.
Grizzly Wakinu really did go to the Eternal Hunting-grounds. The only thing left behind -- snow he had shaken from his coat.
And  there in the sky to this day -- white snow.
Today, it  sometimes called, "the Milky Way." But the path to the Eternal Hunting-grounds is the same way taken by the grey grizzly Wakinu.
• • •
According to the Cheyenne, when the world was created, Death did not occur.

But as the Earth became so overcrowded and eventually there wasn't room for any more beings.The Chiefs held Council to resolve.
One felt that it would advantageous if some people died, went away for a while, and then returned. Coyote felt this plan would not work. The problem would continue because, eventually, when all the people returned from the dead, still, there would not be enough food. Others could not see the merit in Coyote's thinking, however. And they did not want their relatives to be gone forever. It would only cause unhappiness in the World.
Coyote stood alone with his plan.
The medicine man built a grass house that faced the east. When there was death, the body was placed in the house. The spirit of the dead was called by singers to the house. When the spirit came, to the happiness of all the people, the dead person would become alive.
When the first person died and was laid to rest in the house, and the spirit summoned through song,  Coyote rushed to close the door because of a strong whirlwind.
The whirlwind, unable to enter the house, swept by the dead person and eternal life ended, and death began.