Marking the trail in the Ute Pass 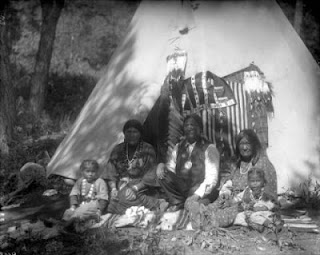 In the spring, after the first thunder is heard, it is time for the bear dance.

The origin of the Ute Bear Dance relates the time when two brothers were out hunting in the mountains and as they became tired, they laid down to rest. One of the brothers noticed a bear standing upright facing a tree and seemed to be dancing and making a noise while clawing the tree. Ute legends or stories remember the time when the elders asked the hunters to go out and gather meat. As they were out hunting, they encountered some small people who ran into the rocks in the hills. They told the elders about them and the elders told them that they were called cliff dwellers which according to archaeologists were called Anasazi, the ancient ones. The one brother went on hunting while the other brother continued to observe the bear. The bear taught the young man to do the same dance and also taught the young man the song that went with the dance.

He told the young man to return to his people and teach them the dance and songs of the bear. The songs according to legends show respect for the spirit of the bear and the respect to the bear spirit makes one strong. After a long winter, everyone was ready to be outside. The Bear Dance was one way which people could release their tensions. The men and women, as they entered the corral, would wear some sort of plumes which at the end of the fourth and final day, they would leave on a cedar tree at the east entrance of the corral. As the Ute's say, leaving the plume on the tree was to leave your troubles behind and start your life anew."
__ Information from the article Bear Dance, by the Southern Ute Drum

Some of the white marble markers still tell the story, though not as audibly and obviously, as they first did in 1911. U.P.T.  routed out in relief on the flat slabs. Originally, there were 15 of them placed by the El Paso County Pioneers. The group said they wanted to mark what was left of the ancient Ute Pass Trail between Cascade and Manitou Springs.
The group was to dedicate the newly-marked, but anciently-traveled, route in 1912.  Only trouble, according to Ute Pass historian Jan Pettit, was getting real Utes to help dedicate.

"The town of Colorado Springs held an eight-day summer carnival in 1911. The carnival committee had requested a group of Utes Indians from the Southern Reservation for exhibition at that event. The good citizens were informed by the Commissioner of Indian Affairs that he did not favor the promiscuous employment of Indians in Wild West Shows . He was, however, not opposed to their employment in exhibitions of a historical and elevating character. A small group of Ute Indians would be allowed to participate in the marking of the ancient Ute Pass Trail and to appear at the carnival. The carnival organizers were required to enter into a contract with the Indians by posting a bond and agreeing to pay travel and other expenses in addition to paying each adult Ute five dollars. The Indian events were so polar with those attending the carnival that the celebration's name was changed to Shan  Kive (good time) with the hope of having more Indians attend in 1912," wrote Pettit in her book "Utes: The Mountain People."

But not everyone was happy. For at the carnival, Utes performed the Moon Dance and other customs that were discouraged at the reservation. In fact, most of the customs that were uniquely Ute, were discouraged by people of influence at the time like School Superintendent Werner of the Southern Ute Agency. They were apparently afraid all dancing, revived traditions and such, might set the tribe, once again, back on the war path.

But after a series of letters between Cato Sells, Commissioner of Indian Affairs, E.E. McKean, Superintendent of the Southern Ute Agency and Fred Mathews, general freight and passenger agent for the Florissant and Cripple Creek Railroad and chairman of the Shan Kive celebration, it was finally agreed that a party of 50 adult Utes, and their families could attend the 1912 dedication and carnival. The contract called for expenses and payment of a dollar in cash, with the express prohibition of allowing the tribal members to purchase intoxicating liquors.

"A large group of Ute Indians accompanied by several dignitaries began their ride down the Ute Pass Trail from Cascade toward Manitou Springs mounted on horses furnished by the Cusack family." wrote Pettit.

Buckskin Charlie, Chief of the Southern Utes, and Chipeta, widow of Ouray, were among the 75 or so Indians, that proceeded down the trail.

Frances Heizer, of the founding families of Cascade, described it thusly, at the time:
"Buckskin Charlie, chief of this tribe, had not been over the trail since the Utes had left this country over thirty years earlier. His birthplace was Garden of the Gods and he remembered every turn in this trail he had ridden in his youth. 'I'm seventy years old,' he said. "I never so happy in all my life.'"

The aging chief explained en route, that neutral territory topped the route, were Utes smoked the pipe of peace with enemies such as Comanche, Arapaho, Cheyenne, and Sioux. They cached their arms and substituted choke cherry branches as an indication of peaceful intentions as they proceeded down to the "medicine waters" with ailing. They believed the springs were the abode of a spirit who breathed through the water, causing them to bubble and cure, at the same time.

As early as 1847, historical accounts by early travelers to this area like Frederick Ruxton, noted that the springs (which now are in Manitou Springs) was collector of native people, and trading location as a result.

"The basin of the spring was filled with beads and wampum, and pieces of red cloth and knives, whilst the surrounding trees were hung with strips of deer skin, cloth, and moccasins. The Indian regard with awe the "medicine" waters of these fountains as being the abode of a spirit who breathes through the transparent water, and thus, by his exhalations, causes the perturbation of its surface," wrote Ruxton in 1847.

Maude McFerran Price, curator of the El Paso Pioneers Museum, is quoted in Pettit's book regarding the importance of the trail marking.
"Today the trail lies marked forever, not alone by the marble tables, by the hopes and fears and joys and tears of the fast disappearing race of red men." 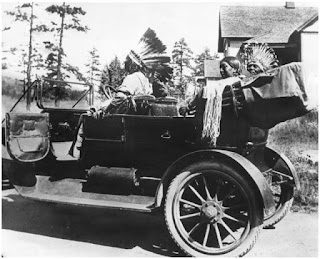 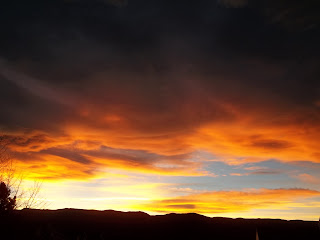 It became clear to me. Simplified. Like the Navajo woman staring out to the west in a R.C. Gorman painting. It is not what you say that is important. How do you say it?
The woman, of course, has big feet and hands, abnormally so, as she stares off the page. An inverted sphere, or bowl, describes the light to me. A faint shadow, back on the unseen wall behind her jet-black hair, fills in the detail. The geometric design on the bowl reminds me that not all of life is a circle.
The steam rises from the hot swirling water to soften philosophy in front of me. It is an intended, programed, planned softening.
Folklore says the Ute figure Ouray spent a lot of time in the latter part of his life, languishing in his namesake springs. Utes thought of the springs as sacred ground. Others say the waters softened the edges on his Arthritis, or aches and pains from the strange path he followed.
Ouray popped up like a Forest Gump figure, from culture to culture. From family connections with the Jicarilla Apache, to the French, Spanish and Mexican traders of old Santa Fe, to the negotiations (perhaps with no authority) in Washington ... with Otto Mears, Kit Carson, and the "great white father" Abe Lincoln. Being an Indian was more complicated then. Choose your battles, careful who you befriend. Choose your enemies.
My own family struggled with it. Enemies or friends? Great-grandmother Minnie Buce Carrigan described the horror in her book, "Captured by the Indians."
"My father began talking to the foremost Indians. My brother has told me that father asked them to take all his property but to let him and his family go. But the Indian replied in the Sioux language, "Sioux cheche," (the Sioux are bad.) He then leveled his double barreled shot gun and fired both barrels at him. He dropped the baby--she was killed--and running a few yards down the hill, fell on his face, dead. The same Indian then went to where my mother had sat down beside a stone with little Caroline in her lap, reloaded his gun and deliberately fired upon them both. She did not speak or utter a sound, but fell over dead. Caroline gave one little scream and a gasp or two and all was over with her. The cry rang in my ears for years afterward. My father was thirty-three and my mother thirty years of age when they were so cruelly murdered by the Indians."
She was captured, and then finally liberated 10 weeks later.
Yet, she later worked as a cook on the Rosebud Sioux reservation. My Granddad Owen, grew up there.
Though, in those days, they didn't give you much time to grow up. He worked as a cowboy with a cattle outfit moving herds from the Dakotas to Arizona with the seasons, from age 12, until a horse threw him and he broke his leg. He later homesteaded here in Colorado.
Growing up and Southwestern Colorado, I had some experiences myself with Navajo, Ute, Hopi and the Pueblos of New Mexico. I saw a measure of racism toward Native Americans. Things that were just not fair, not right.
Listen to me... I will tell you more.
As the Navajo proverbs says, "There is nothing so eloquent, as a rattlesnake's tail."