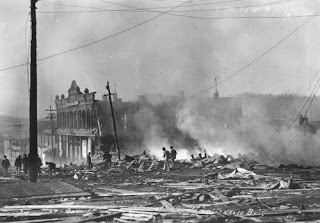 “News is something somebody doesn't want printed; all else is advertising.”
― William Randolph Hearst 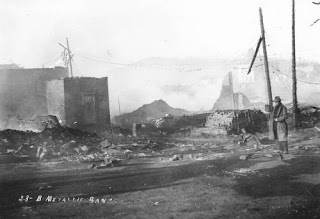 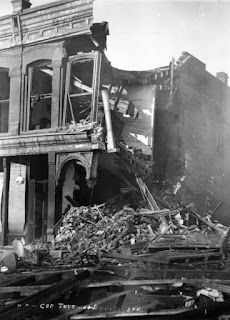 Fires documented before and after by H.S. Poley

Two catastrophic fires in late April of 1896 nearly wiped out the fast-growing Colorado gold camp city of Cripple Creek — near the height of its ascendance. Reporting on event, and its consequences, took up much of next decade in the local, national, and literary and historical analysis.

In one of the more fascinating studies of before and after the fires, Colorado Springs photographer Horace Swartley Poley documented what the town had been and how it struggled to regain its position in the scheme of things. 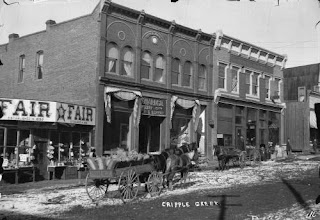 He previously documented other events in the Gold Camp such as his  famous and exhaustive set of photos of the bull fights in Gillett in 1895. He completed fabulous work in his decades of documenting Southwestern archeology and Native American culture. His train and railroad photography rivals giants of the period, such as William Henry Jackson, Robert Richardson, and Otto Perry. 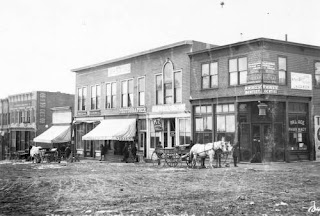 Poley, of course was famous for his work in the Pikes Peak region and throughout the West.
"Horace Swartley Poley created a major collection of photographic images of Native Americans in the southwestern United States. Born in Norristown, Pennsylvania in 1864, Poley moved to Colorado in the 1880s and was a resident of Colorado Springs for sixty-two years. Poley started a commercial photo studio in 1892 and remained an active photographer until 1935. In addition to his photographic work, Poley served as head of the U.S. Postal registry department in Colorado Springs. During summer vacations, Poley served as photographer with archaeological expeditions in Arizona, New Mexico, Utah, and southwest Colorado. He recorded landscapes, cityscapes, and events in the Pikes Peak region of Colorado. Poley was noted for his travelogue lectures employing his images in "magic lantern" shows," from Genealogy.com.
The Denver Public Library obtained the Poley collection in 1937. 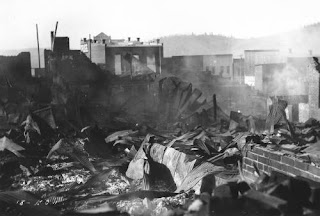 The morning of April 25, 1896, before the first fire started, Cripple Creek Times quoted the city's then Mayor George Pierce. 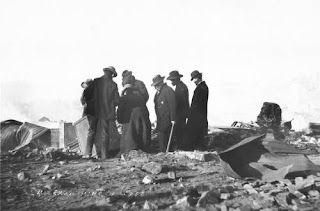 "Our splendid system of waterworks and well-disciplined firemen makes is possible to control and extinguish the most serious conflagrations; henceforth, our citizens can be free of this terror." 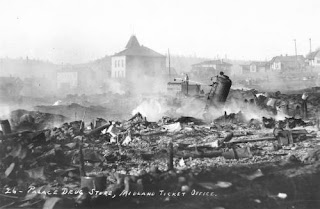 Wire services and train dispatches relayed the difficult news of Cripple Creeks fire troubles in the spring of 1896. The following example appeared in The Daily Northwestern in Oshkosh Wisconsin on April 30, 1896, just one day after the second fire. The headlines screamed the news: 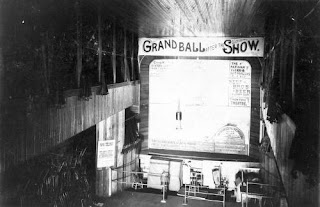 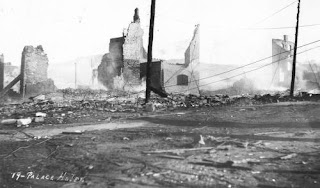 CRIPPLE CREEK'S LOSS.
FIRE DESTROYS THE MAIN PORTION OF THE CITY.
STARTED IN HOTEL AND SWEPT EVERYTHING BEFORE IT -- LOSS NOW ESTIMATED AT $1,500,000 -- SEVERAL FIREBUGS SHOT AND CAPTURED.
Cripple Creek, Col., April 30. -- The fire which started here yesterday afternoon proved a disastrous event for Cripple Creek. The entire business portion of the city was left in ashes and last night 1,000 people were left homeless, with a biting raw wind and the thermometer crowding the zero mark. No description can exaggerate the condition of affairs. Two million dollars worth of property went up in smoke this afternoon, with probably one-tenth of that covered by insurance. The loss of life is great, owing to the reckless use of dynamite in throwing down buildings that stood in the path of the fire, with the hope of erecting a barrier of debris what would stop further progress of the flames.
The fire started in the Portland hotel, where it broke out in half a dozen places at the same time, giving color to the report that the first fire of last week was designed by incendiaries that they might make a raid on the First National Bank which carried over $100,000 cash in its vaults to meet the payrolls of the district that mature tomorrow. The fire spread with a rapidity that can be compared only to the progress of the fire on Saturday. It could not be checked, and from the first alarm preparations were made to repel the destroyer. Special trains were run from Victor and Gillette to bring in miners with sticks of dynamite ready to use wherever there was any call for it. It was more common than water at a city fire, and the lavish use was productive of many fatalities. The Palace hotel, containing 300 rooms was one of the first places attacked with dynamite, and from the results it would appear that no warning was given of the impending explosion. As the walls tottered in response to the tremendous charges of giant powder the air was filled with shrieks of dying men, who had been caught in their rooms and dragged down in the wreck. Before the wreckers could offer any aid they were driven back by the flames that were rolling over the site of the hotel.
Thousands of homeless people shivered about camp fires or wandered among the ruins of this once prosperous city throughout the night. The cold was severe and toward morning snow began to fall. During the night, for a distance of a mile to the right and left, the burning embers presented a sight almost incomparable. Standing on the hill beyond the burned district and to the west, the picture was one of a huge bowl, with the steam rising above. Everywhere along the thoroughfares can be seen the work of dynamite, a great mass of kindling wood. A company of the Colorado National Guard is on duty in the unburned district. Numerous arrests have been made in the outside district, resort to which has been made by the vagrant element, which lately has infested Cripple Creek. All night fires were starting up occasionally on the placer. Where possible the residents pulled the houses down and if that failed, blew them up. They had no water in that portion of the city.
A rumor is in circulation that a man was seen in the act of setting fire to a dwelling on Capitol Hill and was shot by a resident, just as the fire bug was shot and killed by LLOYD THOMSON yesterday. Mayor DOYLE or Victor has employed two fire wardens for every block in the city, as it has been rumored that fire bugs are after that town as well as Cripple Creek. A man was caught late in the afternoon in the very act of firing the rear of the NEWELL company's store. He is in jail. The total loss by yesterday's fire is now estimated at $1,500,000. The insurance will probably foot up between $400,000 and $500,000.
Many other individual losses run as high as $20,000. All the local newspapers, banks and express offices, the telegraph and telephone offices and nearly all stores, restaurants and lodging houses are wiped out.
Two men were caught building a fire under a saloon in Poverty gulch. An officer fired four shots at them and they were captured. On their person was a bunch of skeleton keys reported The Daily Northwestern Oshkosh Wisconsin on April 30, 1896. 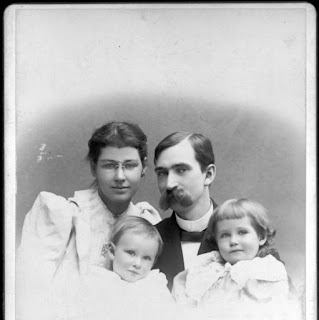 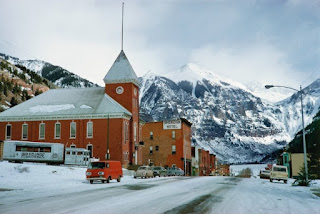 Missing certain things from 50 years ago

One of those things, of course, is pre-1970 Telluride.
Joe Zoline, a Chicago and Beverly Hills based businessman, taking a tip of a friend from Aspen from years earlier who suggested he check out Telluride, decided to create the ski area.
Zoline bought two ranches - Adam's Ranch and Gorrono Ranch, located on the mountain, and  showed up in Telluride for the first time in 1968.

Zoline employed Emile Allais, a French Olympic skier to help configure runs and lifts and consult on the design and layout of the mountain. He also hired Bill Mahoney and Ed Bowers to cut trails, clear slopes, and obtain land-use rights, mining claims, and water rights for the ski company. Zoline contracted ecologists and environmental planners and encouraged local preservationists to protect the Victorian-era town.

The Ski Area started in 1970-71 with snowcat skiing for $10 a day including a sack lunch. Five lifts were built, and the Telluride Ski School was founded in conjunction with the mountain's opening. Zoline's vision finally became a reality when the Telluride Ski resort officially opened on December 22, 1972.

At that time there was no access from town and skiers took a bus to the day lodge located on the western side of the mountain where Big Billie's is today. Proficient skiers could ride the five lifts it took to get to the top of the mountain, ski to town and catch the bus back to the day lodge three times in one day. While you could ski into Telluride, it was not until 1975 when Coonskin Lift 7 was built that the town and ski area were actually connected.

Another thing I miss from those days 50 years ago, is the role of newspapers in society.
Yes, I know there are still newspapers around out there ... But, it is not really the same.
For example: Just consider my newspaper tools at the time. I had a two-sided pack with a pouch in front and one in back, that I filled with Durango Heralds every day at the Post Office in Dolores. I carried with me a blue "Collection" book with tear-out tabs that I pestered customers to pay (at least for last month), on regular basis. I carried, or picked up,  a pocket full of dimes, nickels, and quarters from honor racks around town.

And the news in those days: In March1970, The United State Army charged 14 officers with suppressing information related to the My Lai incident.
Before that in February of 1969, President Nixon and his National Security Adviser, Henry Kissinger, discuss plans for bombing the North Vietnamese supply routes that went through Cambodia. In March of 1969, Nixon launches the secretive campaign called "Operation Menu" in which American B-52s carpet bombed the Eastern side of Cambodia. The bombing campaign lasted for over a year and took a great toll on the country as many civilian lives were lost.

In April of 1970, Nixon orders a secret invasion of Cambodia by US and South Vietnamese troops.
News of the invasion reaches the US and further fuels anti-war sentiments. People stage massive protests against the United States' involvement in Cambodia.
Several students are shot and killed by the National Guard at anti-war protests at Kent State University and Jackson State University. Soon after, Nixon withdraws forces from Cambodia. The United States chooses to continue the bombing of the country, which lasts until 1973.

But you have to consider, that in 1970, I am not really that old. I think about things that are probably gone now — but not forgotten.

Things like the Sportsman Center, which was up river from my house, and operated by the Rules at the time, where I could always buy those push-up orange sherbert tubes ... and my dad or mom, could go next door to that tiny liquor store and buy beer.

And always somewhat-serious for a little kid, I think of the Colorado plane crash of the Wichita State Football team near the Loveland Ski area in October of 1970.
"A twin-engine airliner carrying at least 40 persons, most of them football players and officials of the Wichita State University, crashed and burned high on the east side of Loveland Pass at 1:14 on Friday ... It was believed to be the nation's worst air tragedy involving a sports team," said the Rocky Mountain News then.

But on a positive note, they did remove cigarette commercials from TV that year. And the first Earth Day was announced and celebrated. The "most-trusted man in America" Walter Cronkiet at the time had CBS News Special then, and would celebrate the entire week.   Environmental Protection Agency was established as well.

And On May 17, 1970, Norwegian ethnologist Thor Heyerdahl and a multinational crew set out from Morocco across the Atlantic Ocean in Ra II, a papyrus sailing craft modeled after ancient Egyptian sailing vessels. Heyerdahl was attempting to prove his theory that Mediterranean civilizations sailed to America in ancient times and exchanged cultures with the people of Central and South America. The Ra II crossed the 4,000 miles of ocean to Barbados in 57 days.