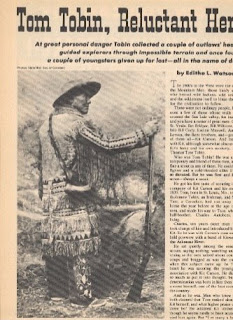 He rode a black horse and wore a black hat, shirt, trousers and boots. He kept two loaded revolvers in his gun belt, one on each side.

If casting someone to play the role of Thomas Tobin, to be authentic, I think you would have to contract a larger-than-life actor of the caliber of a young Clint Eastwood. A legend in Colorado’s history on several fronts, Tobin left his mark.
His father Irish, and his mother a Delaware Indian, Tobin, and his half brother Charles Autobees, arrived in Colorado as early as 1837 with Ceran St. Vrain and worked as trapper and scout for St. Vrain and his partners, the Bent brothers, at Bent’s Fort, as well as Taos, New Mexico.
“Tom Tobin was a picturesque figure. He rode a black horse and wore a black hat, shirt, trousers and boots. He kept two loaded revolvers in his gun belt, one on each side. Although illiterate, Tobin actively supported the local school system and eventually became president of the school board,” wrote Ken Jesson in “Colorado Gunsmoke.”
Tobin also garnered a reputation for being able to “track a grasshopper through the sagebrush” and was skilled with a rifle, pistol and knife. He counted among his good friends, the likes of Kit Carson, “Uncle Dick” Wooton, Ceran St. Vrain and Charley Bent.
It was his tracking ability that got him the job that was to make him famous as a bounty hunter. Jose Filipe Nerio Espinosa and his brother Vivian Espinosa began their murderous rampage in San Luis Valley and had extended it over Ute Pass and into Dead Man’s Canyon near Fountain. One of the Espinosas was killed but Vivian and a younger cousin carried on. Basically, they declared war on all Anglos and by their own reporting, had killed 22 people in Colorado, mostly miners in the California Gulch area from Fairplay to Red Hill, in South Park.
In an interview from Oct. 10, 1946, Kit Carson III, the grandson of Kit Carson and Tom Tobin, and the proprietor of Kit Carson’s Trading Post in Sanford, Colorado, told the following tale of the end of the Espinosa’s reign of terror.
“Colonel (Sam) Tappin considered Grandpa Tobin the best tracker in the country, had him brought in and asked to catch the Espinosas, the reward was not mentioned. Grandpa was told “kill them for humanity’s sake,” nothing said about any reward.”
Tobin tracked them to a draw near LaVeta Pass.
“The Espinosas had been working their way from Colorado Springs going south killing anyone they came in contact with.”
By noticing a bunch of crows circling, Tobin identified the murderous villians’ campsite.
“He found them busy making a meal,” related Kit Carson, III. “The older Espinosa was squatting in front of the fire, while the younger one was hobbling the horses. Grandpa waited till the younger one came near the campfire, not wanting anyone to get away in the heat of battle. Hiding behind a rock, Grandpa sighted in on the older man and shot him, he fell face first into the fire, grandpa loaded a charge and spit a bare ball into the old Hawkin rifle and killed the younger Espinosa.”
Tobin finished off the elder outlaw with his knife and took the Espinosa’s heads in a gunny sack to prove the job was done.
“When arriving at Ft. Garland, the Colonel, some of his officers, and their wives had been out riding, an announcement was made that grandpa was there to see the Colonel. He was brought into a large room where the officers and wives were relaxing after their ride. The Colonel asked, ‘Any Luck, Tom?’ Grandpa said, “So-so,” and he held the gunnysack upside down rolling the heads out onto the floor, ladies were screaming, the officers and Colonel even looked a little green.”
Interestingly enough, Tom Tobin’s son, also Thomas Tobin, was the first state correctional officer killed in the line of duty. On June 26, 1899, Officer Thomas Tobin was stationed at Bridge Seven, a few miles below Florence, during the search for escapee Charles Nichols. Nichols was serving a life sentence for the murder of the marshal of Victor. “In the darkness, one of the sheriff’s posse shot Tobin in the center of his chest, thinking the man on the bridge was the escapee. Tobin was brought back to Canon City in a railroad car; he died a few days later on July 4, 1899,” according to information from the Colorado Department of Corrections.
###
Posted by ___ Restless Native at 9:55 PM

This is a great book!!