Colorado was full of colonists 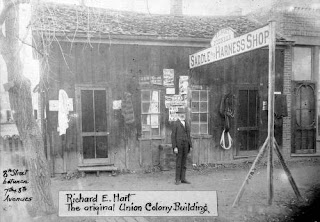 Webster says a colony is a body of people living in a new territory but retaining ties with the parent state.

Colorado, in its infancy as a territory, was full of colonies in those early days. The first of those colonies seemed to be heavily influenced by newspaper editors and publishers.

"The first colony to actually take up lands within the territory was a thorough-going, full fledged cooperative endeavor. Carl Wulsten had come to the United States from Prussia before the Civil War. He had served in the union Army and then settled in Chicago where he edited a German-language newspaper. In that fast-growing, rapidly industrializing city, he saw around himself, and his fellow Germans, nothing but misery and dirt and long hours of back-breaking work in the city's factories. Prompted by the concept of communal living as a means to escape this plight, and envisioning an agricultural society in the Great American West where fellow immigrants could again attain dignity and economic well-being, Wulsten organized the German Colonization Society in August, 1869," wrote "A Colorado History" editors Carl Ubbelohde, Maxine Benson, and Duane Smith.

By 1870, they began building homes in the Wet Mountain Valley, plowed fields, and planted their first Colorado crops in a town they named "Colfax" after the vice-president of the United States, at the time. "Capital, labor and profits, if any, were to be pooled for five full years in a communistic arrangement," says the history text.

"But, as so often happened in other such ventures, dissensions began to erupt immediately within the group."

Many eventually moved to other towns in the territory, such as Pueblo, Canon City and Denver.
"There was considerable hostility to the group in some parts of southern Colorado, based partly on the "alien" character of the settlement, and partly on the rumors that the Republican administration in Washington was championing the settlement as the first of several groups designed to supply a Republican majority in otherwise normally Democratic areas of the territory," says "A Colorado History."

Roughly, about the same time the Germans in the Wet Mountain Valley were trying to cobble together their cooperative settlement, Nathan Meeker, the Ag Editor for the  New York Tribune,  was also looking around for a site in the West.

"Meeker was an experience hand at cooperative colonies. From 1844 to 1857 he had been a resident at the Trumball Phalanx, at Braceville, Ohio. By the time he returned from his western tour, Meeker was convinced it would be possible to settle a cooperative community in Colorado. His publisher and editor, Horace Greeley, who already has seen something of the territory, endorsed the idea enthusiastically," notes the history text.

At a public meeting at the Cooper Institute in New York City, on Dec. 23, 1869,  the Union Colony was born. Meeker was chosen as president, and memberships were sold for $155 to men of temperance and good character. The money would be used to purchase a site for the colony.

In the the spring of 1870,  Union Colonist began arriving at the confluence of the Cache La Poudre and the South Platte Rivers. The town established there was known as Greeley.

To supplement their tents and other make-shift structures a large building was purchased in Cheyenne and transported via Union Pacific to Greeley. The building was retrofitted and became lodging, in the form of "Hotel de Comfort," built schools, and dug the first irrigation ditches.

Horace Greeley,  Meeker, and their newspaper, all were controversial. But sobriety, agriculture know-how, and luck, led the Union Colony to early prosperity. The irrigation system was well-planned and improved upon successfully over the years. Greeley farmers harvested amazing crops. Nearby ranching operations didn't always get along with the "Saints" of the colony there was some friction over an expensive fence erected by Union colonists, saying it had been erected to separate the "Bible-loving inhabitants" of Greeley from "barbarians" on the outside.
"The rather spectacular successes on the Union colonist made it inevitable the it would become the prototype of other such enterprises," says "A Colorado History."

In 1871, the Chicago Colorado Colony located on Middle St. Vrain Creek, creating the town of Longmont, with the help of its "fairy godmother" Mrs Elizabeth Thompson, of New York, who purchase memberships for poor settlers and and otherwise encouraged the settlement, which prospered from its strategic location along Left Hand and Boulder Creeks, as well as St. Vrain.

Evans was successful, as well, south of Greeley, with advantageous rail service, flowered. Platteville boomed. But Green City on the South Platte River failed because they were "over promoted" and didn't fulfill promises.

"Fort Collins came closer satisfying the requirements of a true colony than many other new settlements." The site had been a military reservation, named Camp Collins, but abandoned, and bought up by a town company which planned the new city of Fort Collins. Memberships in the Fort Collins Agriculture Colony were offered to persons of "good moral character" for $50, $150, or $250, for city lots, farming land, or both.

In Fremont County, the Hebrew Immigrant Aid Society settled Jewish emigrants from Russia and Poland in the Wet Mountain Valley, but with limited success. Cotopaxi families later were relocated to with the help from Denver Jewish families to other locations.

Several southern Colorado newspaper editors were dead set against what they called a "Mormon plot" to establish a belt of communities, 25 miles apart, in the San Luis Valley all the way from Utah through Colorado to Nebraska. "Actually the Mormons proved to be more interested in farming than politics, and friendships developed with their Spanish-speaking Catholic neighbors sufficient to quiet whatever fears of the alarmist Anglo editors had raised among the actual residents of the Valley."

Much later, Monument historian Lucille Lavelett  noted that other colonies were prone to develop, though sometimes with limited success.

"The Nudist had a retreat one mile south of Monument, on Mrs. Judd's old farm in 1954," she wrote. "The cold wind from the top of Pikes Peak and the sun behind Mount Herman early in the afternoons kept it too cold for them, so they were only there about a year. It was named 'Roaming Acres'," she wrote in her 1975 history of Monument.

Photo 1:
Richard Hart of Greeley, Colorado in Weld County stands outside of the original Union Colony (original name for Greeley). The wood-frame building has board-and-batten siding, a front gable, shingles, and two entry doors. Advertisements are posted on the side of the building. Signs include "Saddle and Harness Shop." 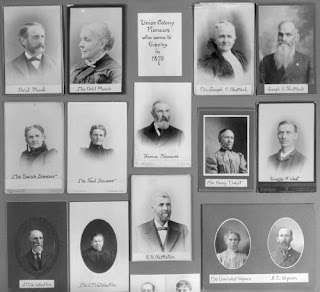