Tools in the holster and tell-tale choice 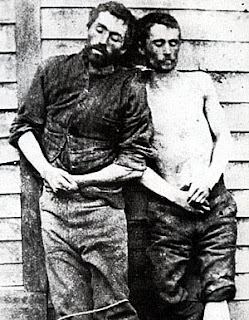 It is said that you can tell a lot about somebody by the choices they make. Favorite Beatle, Fat Tire beer in the cooler or Miller High Life in Fridge, plain or peanut, Ford Ranger or Subaru Outback – it all gives a bit of insight.
What then, can we learn from a particular preference in firearm?
Men of violence, of course, sometimes choose paths that make the firearm necessary in the first place. But once headed down that path, what compels them to shove a particular tool in the holster?
The Samuel Colt Co., in 1873 developed Peacemaker model and it became an immediate hit here in what was the “Wild West.”
“It was originally produced in .45 caliber, with a 7 ½ inch barrel, for Ordinance issue to troops. Custer’s Seventh Cavalry troopers each carried one of these weapons with 18 rounds of ammunition in addition to his Springfield .45-70 single shot,” wrote Robert B. Cormack, in a paper for the Denver Westerners Monthly Roundup in 1962.
Part of its popularity was the result of genius of forethought by Colt in chambering this six-shooter for the same cartridges used in the Winchester Model ’73.
The ‘hog leg,’ or ‘plow handle’ and even sometimes called a ‘cutter’ was the first large revolver to use self-exploding, center fire cartridges.
“Bat Masterson’s favorite Colt was a .45 cal. single action with a stubby 4 ¾ inch barrel. Wyatt Earp usually wore two of this caliber. The left one won was a ‘Peacemaker’ with a 7 ½ inch barrel, the right had a 12 inch barrel. Known as a ‘Buntline Special,’ this Colt had been made to order and presented to him. According to the testimony of his friends, Doc Holliday definitely did not lug a shotgun everywhere with him. His pet was a nickel-plated .38 double action Colt, though on many occasions he was known to carry additional artillery. Billy the Kid had small hands, and therefore preferred his .41 Colt double-action Colt to the .44-40 he sometimes used. Butch Cassidy favored the Frontier.44-40 colt with a 7 ½ inch barrel. Wild Bill Hickock gained his fame with two 1851 Colt Navy .36s with ivory grips. He retained his fame with two ‘Peacemakers’ and died with a Smith & Wesson tip-up .32 rim-fire revolver in his pocket,” wrote Cormack.
Perhaps one of the most interesting elements of the times, was how commonplace the option of packing a piece was.
After all, when the McCarty gang, buddies of Butch Cassidy, decided to rob the Farmers & Merchant Bank in Delta and a bank teller started yelling for help and was shot and killed by Fred McCarty, it was the owner of the hardware store who came to the rescue.
“Ray Simpson, junior owner of the hardware store of W.G. Simpson & Son was cleaning his Sharps .44 caliber rifle at the time of the bank robbery. The hardware store was directly across Main Street from the bank. Simpson was thirty-one, a tall and slender man. He loved to hunt and was a crack shot. He was quiet, cool and calm,” notes Ken Jessen in his 1986 book “Colorado Gunsmoke.”
“Upon hearing the two shots from the interior of the bank, Simpson quickly pulled the lever down on his Sharps to drop the breech block. He inserted a shell and grabbed several more as he ran out of the store … Just then, he saw the outlaws coming at full gallop down the alley. Simpson fired from the hip at the man in the rear, Bill McCarty. The entire top of Bill’s head was blown off, and his brains ended up some twenty feet from where he fell from his horse. Simpson dropped the breech block again to insert another shell,” Jessen wrote.
“In the meantime, young Fred McCarty pulled up to see if could help his fallen father. Fred was nearly a block away from Simpson, but that moment of hesitation gave Simpson a clear shot. The bullet from Simpson’s rifle hit Fred in the base of the skull, then came out his forehead. Tom McCarty did not slow to see what happened to his brother or his nephew, but continued to ride hard. Money from the robbery was scattered in all directions in the street,” according to Jessen.
Simpson fired again, and then once more at Tom McCarty but missed each time, hitting instead a riderless horse.
Later Tom McCarty sent letters for months to Simpson, threatening to avenge the killing of his brother and nephew.
Simpson eventually made the choice to leave Delta and move to California, and lived a relatively long life for the times, surviving until 1940. Tom McCarty is said to have hid out in the Paradox Valley, on the Dolores River in Montrose County, for some time after the robbery but eventually left the area also, possibly ending up in Oregon, Alaska or Montana.
###
Photo Information:
1. Father and son, Bill and Fred McCarty, killed with Ray Simpson's .44 caliber Sharps rifle while trying to flee a robbery of the Farmers and Merchant Bank in Delta, Colorado. Interestingly, as the two outlaw's bodies were displayed for several days in downtown Delta as a lesson in making bad choices, notice that the undertaker apparently shaved the two, located Bill's hat, and styled (or at least combed) Fred's hair.
2. William Alexander (Bill) McCarty.
3. Fred McCarty.
4. William Ray Simpson. 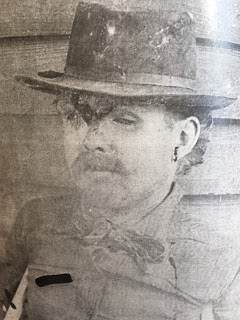 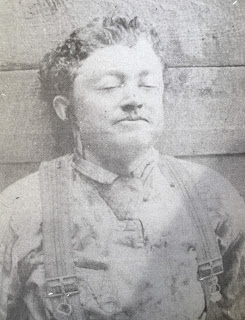 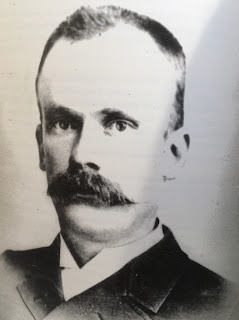 Basically, in the end, it is “the road’s” entire fault.

I always found it interesting that the “highway to hell” ran through Cortez and on into Utah, with stops at Pleasant View and Cahone. After all, as Carl Sandburg wrote, “To work hard, to live hard, and to die hard, and then to go to hell after all, would be too damned hard.”
But I guess the politicians and the sign makers fixed it for us.
In 2003, on May 31, the Old 666, “the mark of the beast’ got its brand altered and became Highway 491.
“Whereas, the living near the road already live under the cloud of opprobrium created by having a road that many believe is cursed running near their homes and through their homeland; and
“Whereas, the number “666” carries the stigma of being the mark of the beast, the mark of the devil, which was described in the book of Revelations in the Bible; and
“Whereas, there are people who refuse to travel the road, not because of the issues of safety, but because of the fear that the devil controls events along United States Route 666; and
“Whereas, the economy of the area is greatly depressed when compared with many parts of the United States, and the infamy brought by the inopportune naming of the road will only make development in the area more difficult,” read the Joint Memorial Resolutions put forth first by the New Mexico State Highway and Transportation Department and later joined by Colorado and Utah transportation officials in recommending the name change.
But as Richard Weingroff, of the Office of Infrastructure, noted in a 2003 article about why it was number 666 in the first place,
“Despite the biblical reference and the image U.S. 666 has gained over years, the gematria calculation had nothing to do with the numbering of the route. Boring though it may be to contemplate, the route was simply the sixth branch of U.S. 66 in early August 1926, and retained that number when U.S. 466 was dropped a few weeks later,” said Weingroff.
That bit of truth and knowledge did little, however, to stop the tales of the strange and the twisted on the remote stretch of blacktop winding its way through multiple states.
Mad truckers, packs of demon dogs, and even a frail girl in a long nightgown that appears out of nowhere, are just some of the stories associated with “Triple 6” according to Linda Dunning, in a “Haunted Utah” piece which she wrote in 2003. Not to mention the occasional “Skinwalker.”
“There are Native American tales of unwanted passengers appearing in the backseat of the car along such stretches of highway,” writes Dunning. The evil shape shifter may take the form of a crow, or a coyote or other animals.
Then, of course, there is the movie. The 2001 straight-to-video release by Lions Gate Home Entertainment titled simply “Route 666,” has Lou Diamond Phillips complicating his job protecting a mob informant by heading down a mysterious highway with evil prison gang zombies in chase, as well as wicked mobsters. Basically, in the end, it is “the road’s” entire fault. But the Joshua Trees and the dialog makes you wonder if the writers and the directors (and maybe even the actors) fell in a Peyote patch out in there in the process of filming.
The name change brought a ton of attention nationally and internationally.
A June 2003 article in the New York Times by Jodi Wilgoren, told the story of how the Anasazi Restaurant and Lounge had its address altered 15 years before the highway took the treatment.
“June Merrett (it is really Merritt, even the ‘Gray Lady of Journalism’ can jack up the spelling of a name every so often) who owned the Anasazi then, decided that the address of her establishment was unacceptable. As though it wasn't inauspicious enough to be stuck squarely on U.S. Route 666, the building's number was also 666. So along with adopting the local name of the road as it crosses through town -- Broadway -- she convinced officials at City Hall to switch the address of the Anasazi to 640.”
When the highway officially dropped the 666 designations at the end of May in 2003, the signs for “New 491 – Old 666” as well as anything with the “666” became quite the collector’s item fetching admirable pricing on E-Bay.
Fanciers of the signage made it difficult to keep the route marked. People were running over them with their cars, taking the chain saw or the cutting torch to them, and what have you.
That reminds me of conversation related to the absence of signage that I overheard in Cortez shortly after the highway name changed.
“Is that the Highway to Hell over there?
“No, now it’s just the road to Dove Creek.”
“What’s the difference?”
“Good point.”
###
Posted by ___ Restless Native at 9:08 PM No comments:

There was a time, time is a river 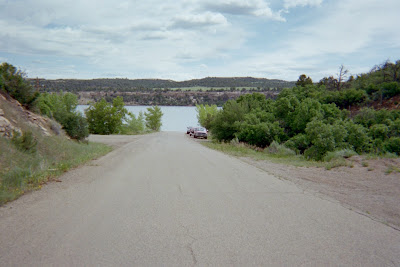 Time is a river. All things sweep past and are carried away