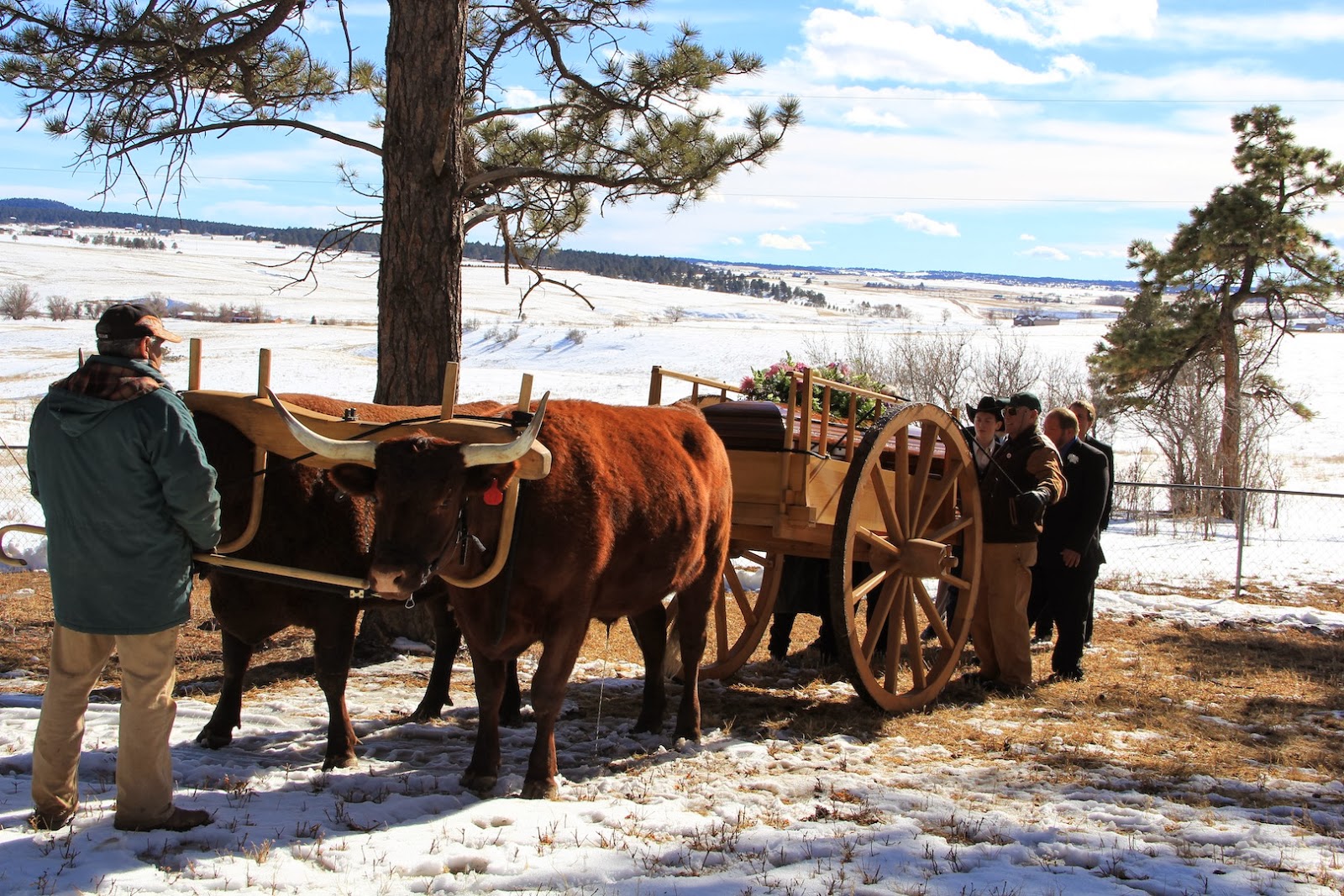 At the time of death, she was still actively involved in researching historical properties, doing enactments for adults and children, and nominating properties for the local registry.

"At two o'clock p.m., a funeral procession was formed, in which nearly every man, woman and child of the company united, and the corpse of the deceased lady was conveyed to its last resting place in this desolate but beautiful wilderness."

__ From The Grave of Sarah Keyes on the Oregon Trail, by William E. Smith, 1936, Kansas Historical Society.

Penny May Burdick, of Larkspur, was carried by Ox cart Saturday, to her final resting place in Spring Valley Cemetery, and laid to rest among other notables in the historically rich, and beautiful grounds known for its Pikes Peak vistas and links to the past. Burdick, 67, died Jan. 30, 2014, after fighting a lifelong illness.
"Penny always loved Douglas County and appreciated her great grandmother's family history of coming to Castle Rock in 1885 from Staffordshire, England. When she was a child, her grandmother, Evelyn, would tell stories about living in the "Rock" as they drove down to visit relatives and that sparked a passion for the history of the area. Her grandmother played piano for barn dances and her Great Uncle Frank Bakewell was the Castle Rock Station Agent for the Santa Fe Railroad for many years," related the memorial program in her honor.
"Penny enjoyed history, children, loved animals, especially horses, and always had some kind of critter needing a home on the ranch. She was involved in many community organizations, serving on the board of directors for Praying Hands Ranch, she was a founding member of the Douglas County Historic Preservation Board, a 4H leader for Cherry Valley AG and was a superintendent for the Douglas County Fair. In addition, she served as President of Cherry Homemakers Home Extension Club and Larkspur Historical Society. At the time of death, she was still actively involved in researching historical properties, doing enactments for adults and children and nominating properties for the local registry. In 2011, the Douglas County Board of County Commissioners recognized Penny for her contributions in documenting Douglas County history."
David and Dandridge, two Oxen owned by Rollie and Paula Johnson, at Three Eagles Ranch, just over the Douglas County line near Monument, carried Penny the several hundred yards from Killin Chapel at Spring Valley Cemetery to the grave site. The cemetery is permanent home to Monument-area historical notables such as Patrick Murphy, Grace Best, John Hodgin, many Noes, and the Gwillim children.
Three Eagles Ranch is one of the few western ranches that raise American Milking Devon Oxen. The breed is now extinct in England and were down to just a handful in the United States until about 30 years ago. Efforts by the American Livestock Breed Conservancy and others have been able to increase the American herd to about 600 animals. The Johnsons, who began demonstrating their Oxen at Penny Burdick's urging, are raising Oxen teams the help of their hired hand of the past ten years, Dulces Granados. 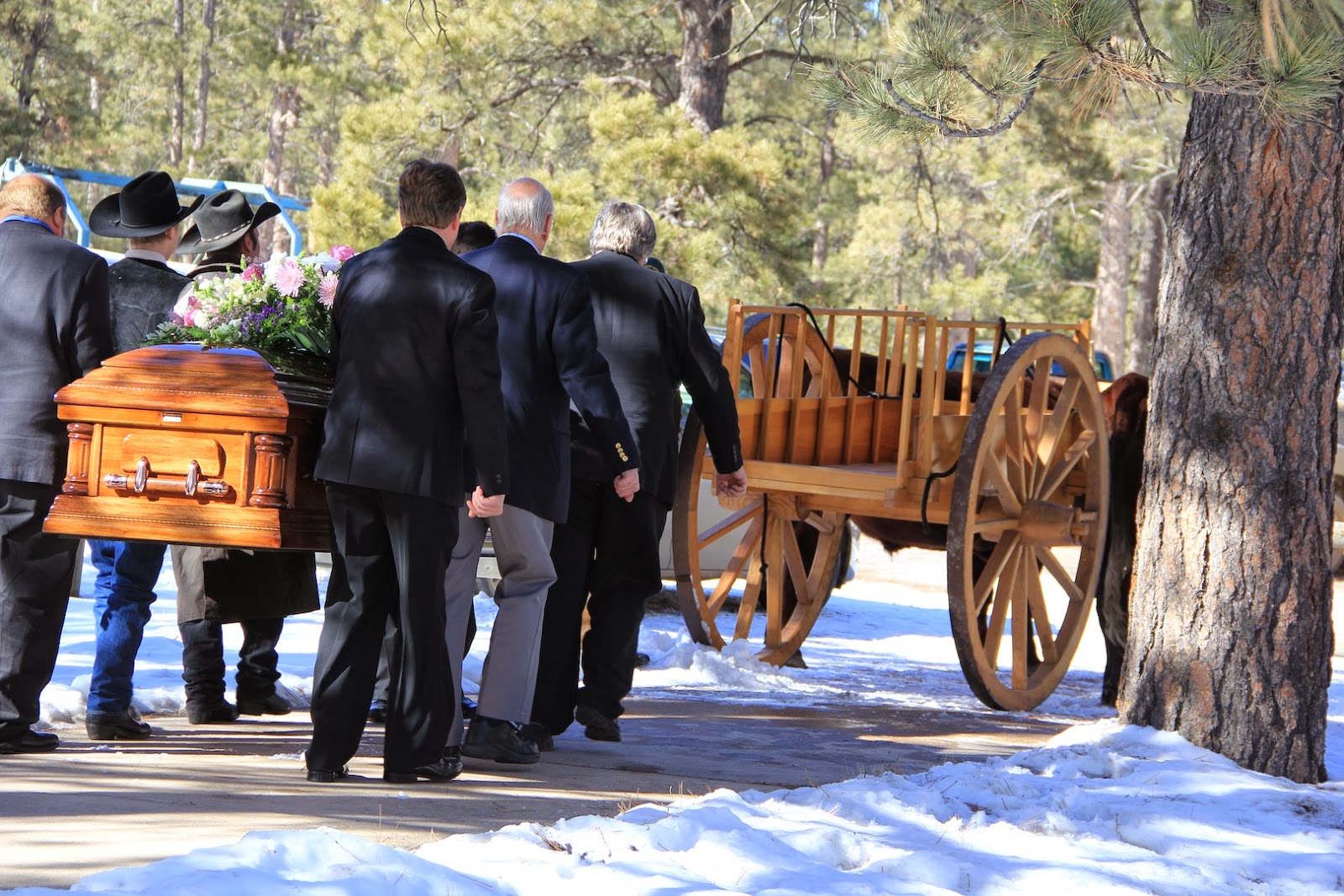 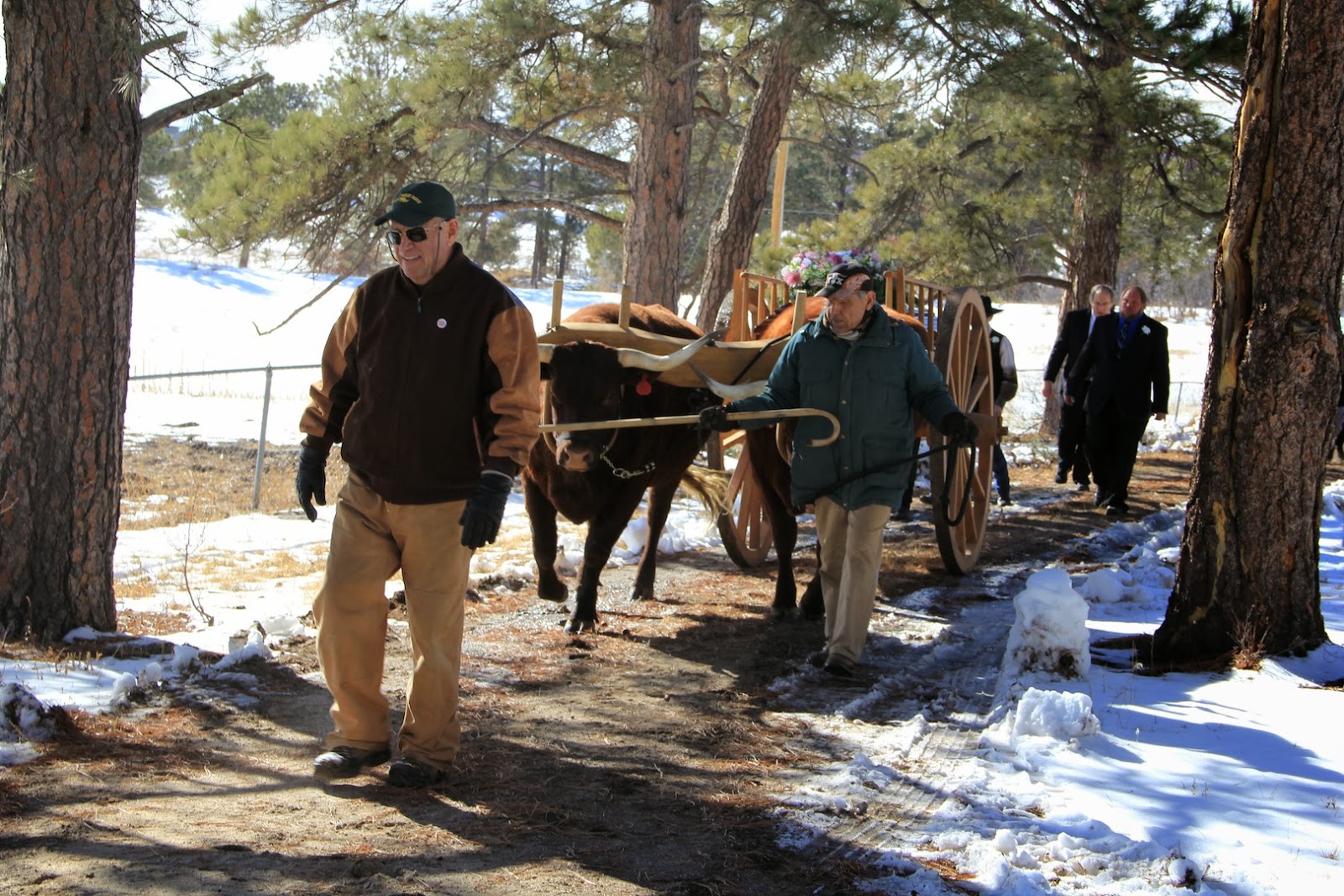 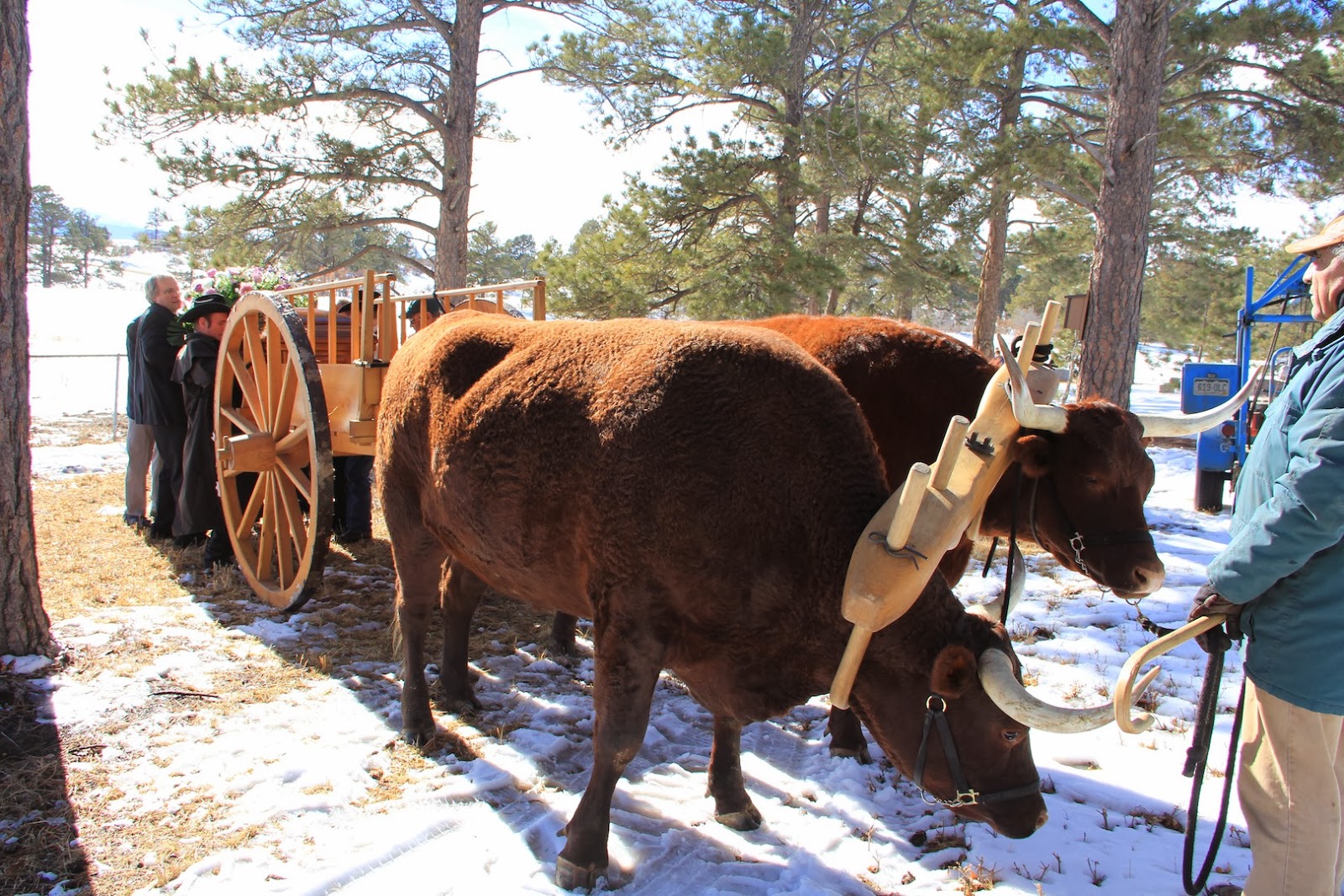 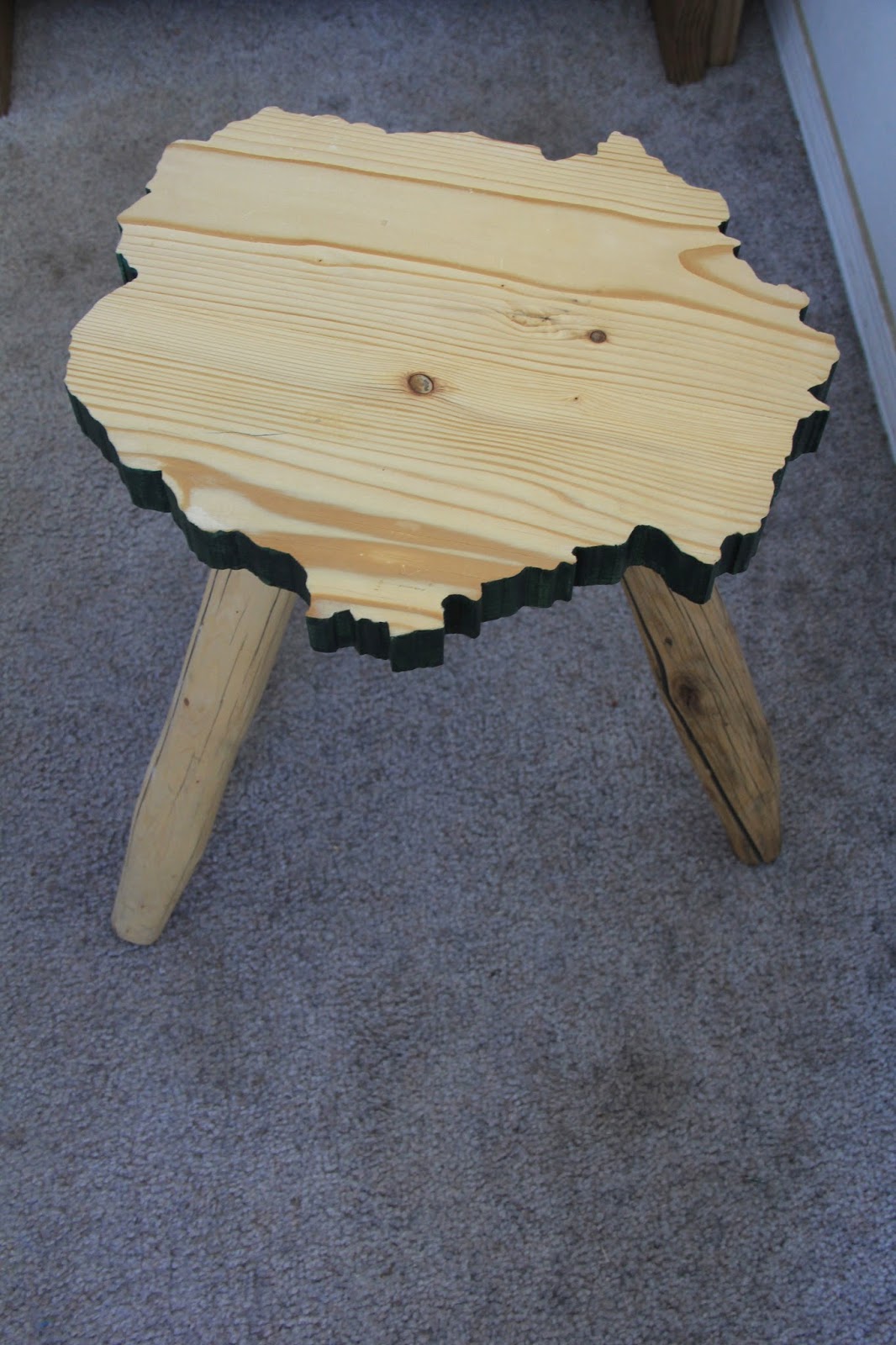 Born of floods, following fires, the organization philosophically and metaphorically, is held up like a three-legged table.
In what some call the double disasters, the Coalition for the Upper South Platte (or CUSP), now serves as a model... statewide, nationally and perhaps internationally.
"We have more fire experience, and we have seen time and time again, that floods follow wildfire, so our main focus was to keep people safe and infrastructure intact when the inevitable flooding strikes the communities around the burn scar,"said Carol Ekarius, CUSP Executive Director last week.
Through the three legs: economic sustainability, community values, and cooperative efforts of the stakeholders; CUSP seeks to protect the water quality and ecological health of the Upper South Platte Watershed.
It all started after the Buffalo Creek Fire and Flood (which did more than $35 million in damage resulted in two deaths) in Jefferson County 1996, when 11 government entities saw the need for a non-profit organization to coordinate volunteer projects according to the principals of the three-legged table or stool.
Now, its 17-member board of directors reads like a who's who, and encompasses stakeholders representing the City of Aurora, Jefferson County, The Wilderness Society, Center of Colorado Conservancy District, Park County, Jefferson Conservancy District, Centennial Water & Sanitation, Douglas County, Upper South Platte Water Conservancy, Denver Water, Trout Unlimited - Cheyenne Mountain Chapter, Teller County, Colorado Springs Utilities, and interested individuals.
The in-and-out budget last year was nearly $3.7 million and allowed for a 25-person staff (19 full-time equivalent) headquartered in the small office in Lake George. For 2014, they are conservatively budgeting $2.5 million, but it will likely grow as driven by need and funding, as last year's did.
Most of their work, of course, is in the 2,600 square miles of the district (area larger than the state of Rhode Island), though increasingly, their expertise is sought out for projects outside of their boundaries.
Because of their experience, similar fire and flood issues in Northern Colorado and elsewhere, has prompted requests for staff to go to other fires in an advisory capacity. East Peak, West Fork complex, Arizona fires, conferences in Washington, have all benefited from that considerable expertise.
When dealing with four major water providers, multiple organizations and four different constituent counties, it might seem impossible to stay out of the crossfire created by emotionally-charged issues of water, property and politics,.
"We are apolitical," but Ekarius says.
"We don't comment, and stay out of contentious issues. By the time the dust settles, advocacy is not our role."
Instead they focus on robust monitoring programs, mapping, organizing volunteer efforts, education, and in her words, "doing no harm," as the result of unintended consequences.
"We work with Mother Nature."
About 6,500 people helped in their volunteer force this past year.
Historic information gathering, evacuation considerations, data recording, and generally trying to understand and function within the given resources optimally, sometimes gets them labeled. Especially when warning of possible impending danger.
"We haven't hit the worse-case scenario yet," says Ekarius, in describing the possible problems in the case of the Waldo Burn Scar area. Though, that area is not in their district, they have been asked to help  and have done extensive work in the last years following the fire.
"It is amazing how fast we go from 'fear mongers' and 'Chicken Little' to 'expert,'" notes CUSP Environmental Education Coordinator Theresa Springer.

"While the life-theatening, post-fire impacts in and around the Waldo Canyon burn scar were the most immediate concern this year, we still found time to do some exciting work in the Upper South Platte Watershed," observed CUSP's most-recent quarterly newsletter.
"Volunteers of all ages worked on projects doing rehab in the Waldo Canyon, Springer, and Haymen burn scars; fuels mitigation; river restoration; and improving water quality."
All efforts, three legs, working with Mother Nature, and holding up the stool or table. 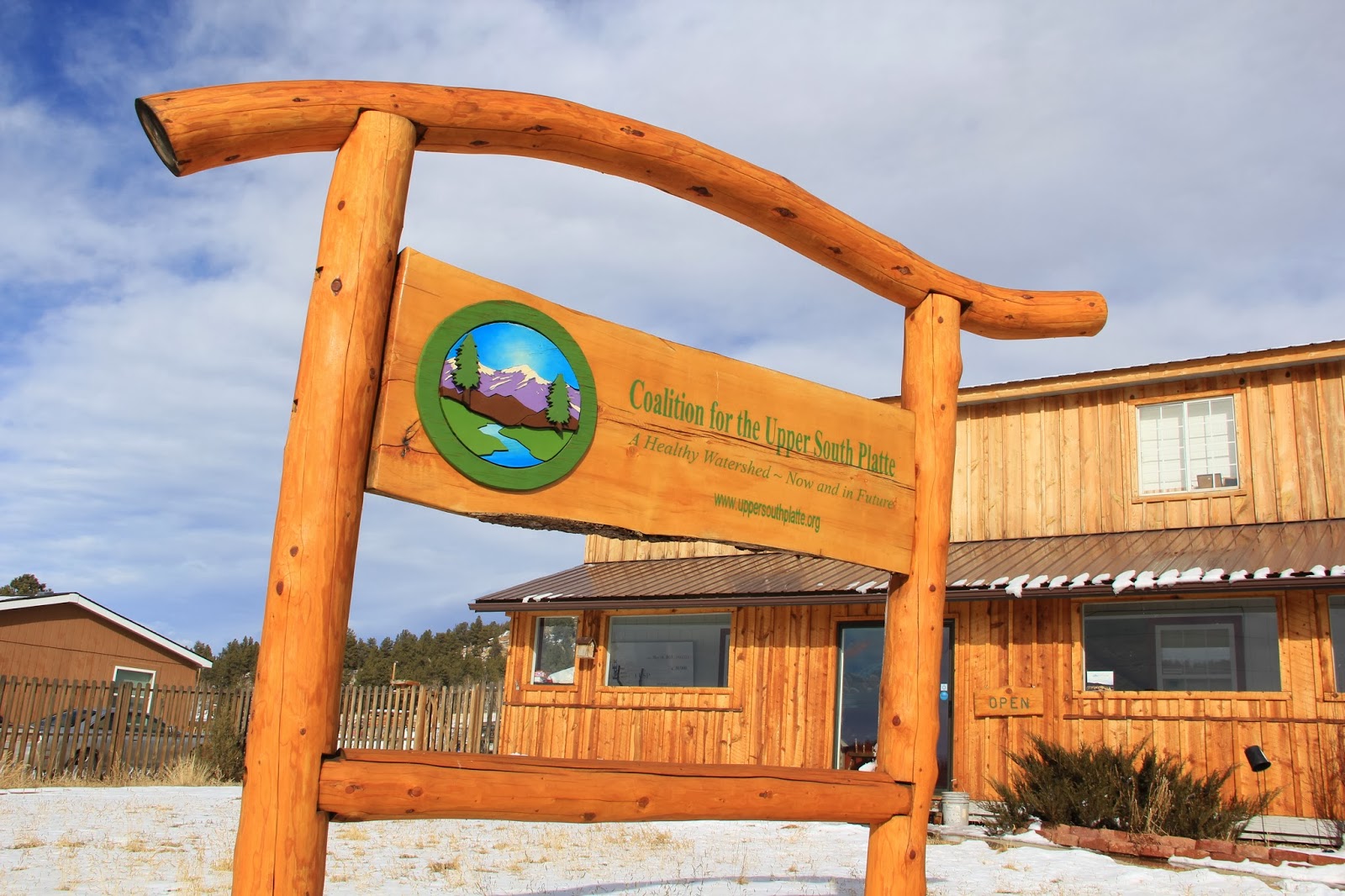 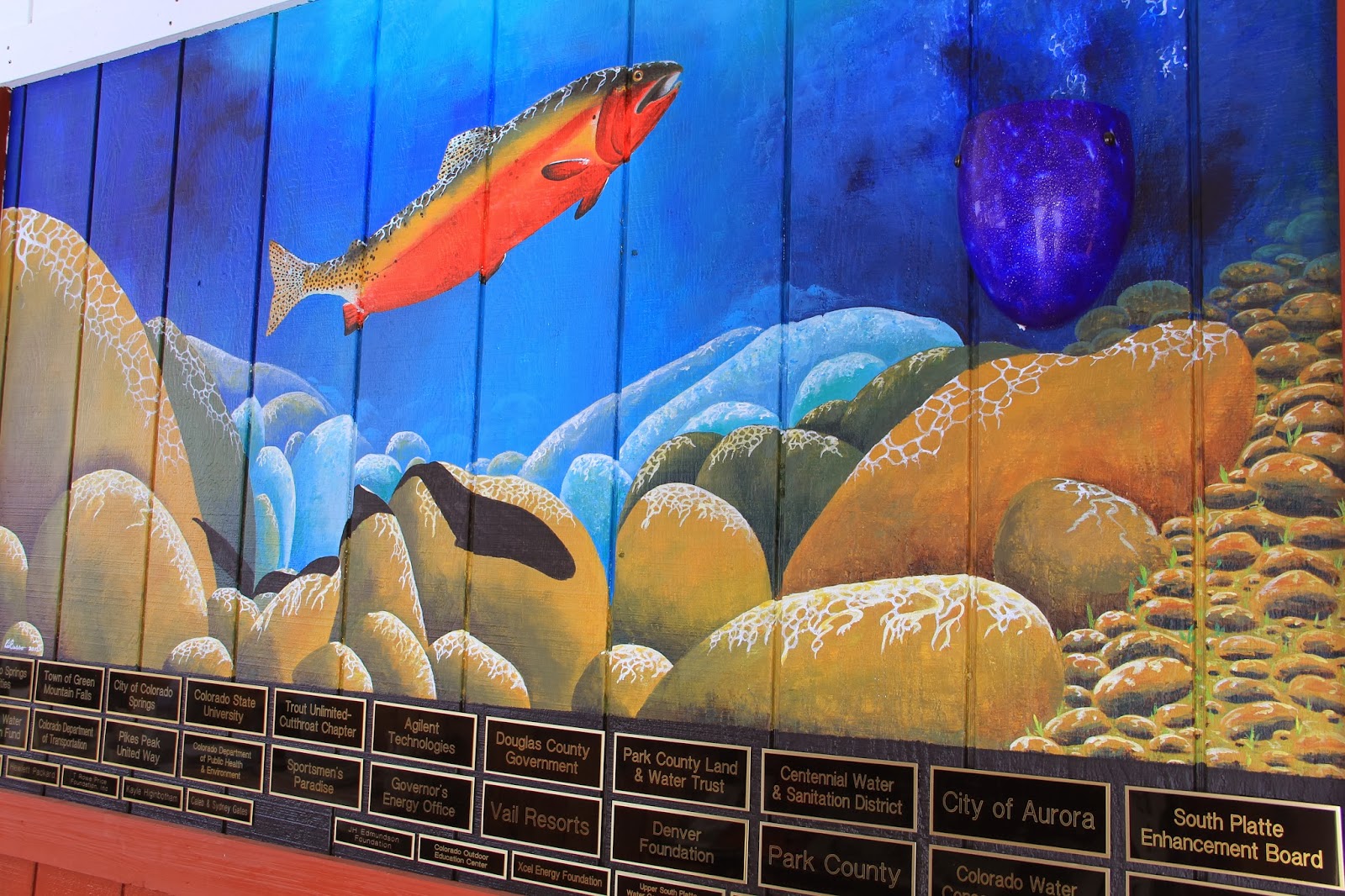 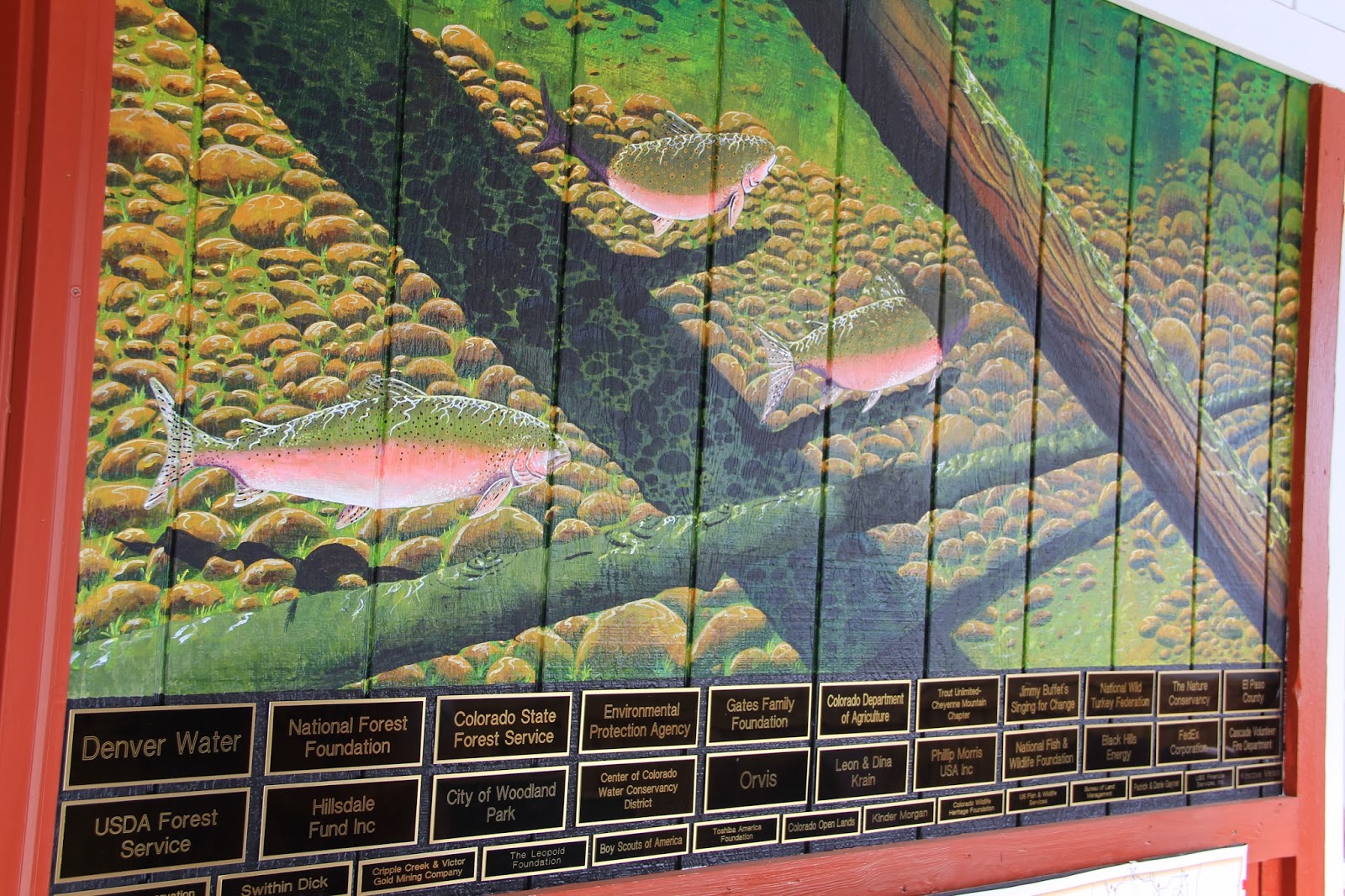 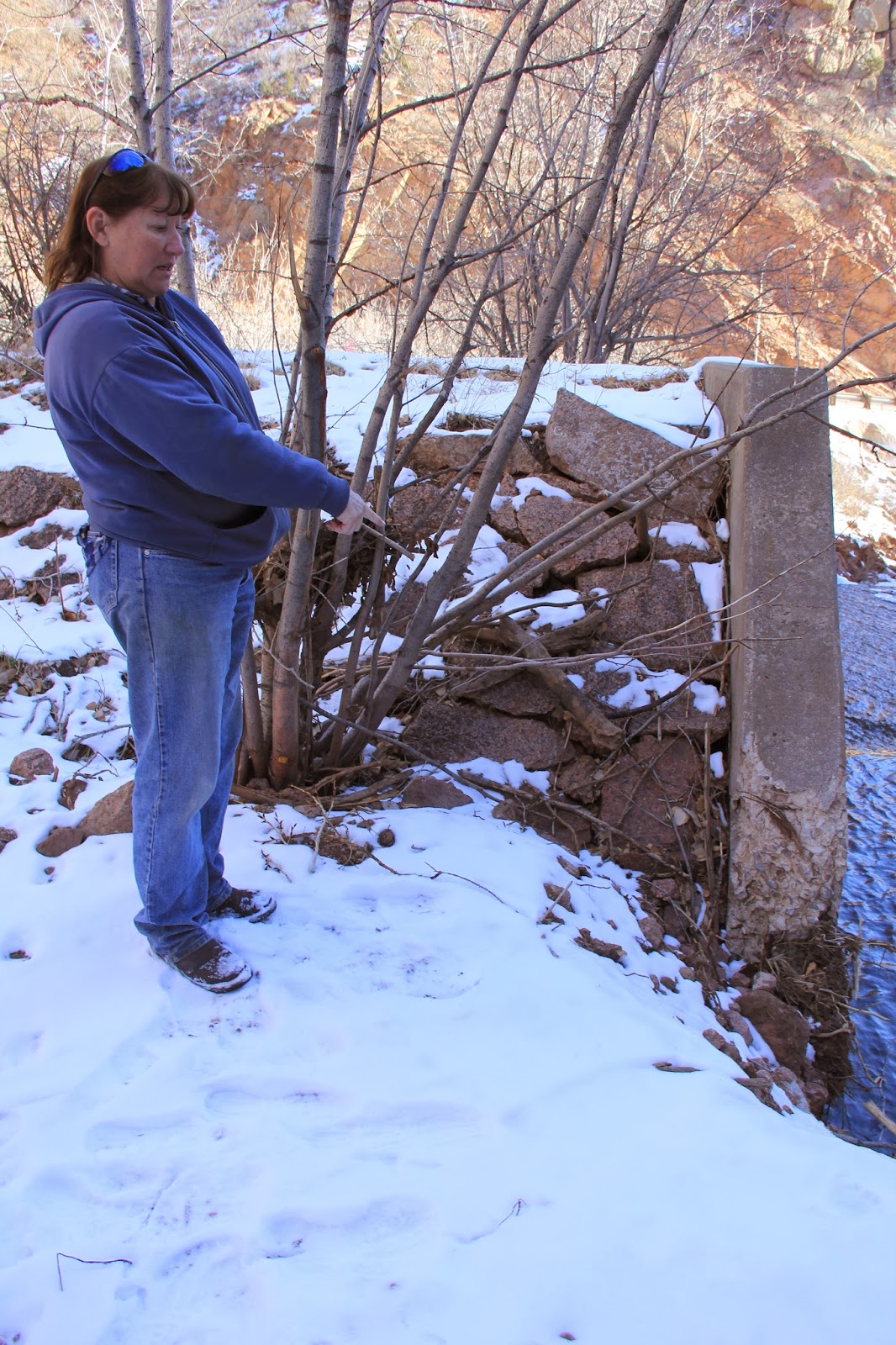