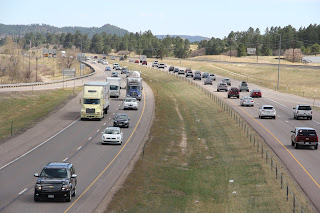 Paying the toll for progress

A few years ago, “Super Slab” discussions about a toll road east of I-25 brought to the fore a long history of toll road building in Colorado and here in the Pikes Peak region. Today, in a related ribbon, you might be backed up for a while in "The Gap," between Castle Rock and Monument.
The Pikes Peak Toll Road helps make the peak the most visited mountain in North America with over a half million visitors annually. It was completed in 1916. And within the last decade, a company called CTRI Incorporated looked at the possibility of building another toll road from Woodland Park into the Divide area. And Gold Camp Road was of course a toll road shortly after the tracks where pulled up.
But at the height of the gold rush in the Cripple Creek District, many access roads in required paying a fee.
“The only road into the district that didn’t charge a toll was from Florissant,” noted local rail historian Mel McFarland. “That is why the railroads were so popular when they arrived.”
Daniel B. Klein, a toll road researcher and Santa Clara University professor, estimates there were at least 350 turnpikes in early Colorado prior to 1902.
“Unlike the areas served in by the earlier turnpikes and plank roads, Colorado, Nevada and California ... lacked settled communities and social networks induced participation in community enterprise and improvement. Miners and merchants served them knew the mining boom would not continue indefinitely and therefore seldom-planted roots, ” wrote Klein.
According to author Mathew E. Salek, road building was a concern in Colorado even in the 1860s.
“When Colorado became a territory in 1861, the Kansas Legislature already had authorized some toll roads and bridges, one of which was the toll bridge over the Arkansas River at Pueblo, built in 1860. Otto Mears built some 300 miles of toll roads in and around the San Juan Mountains, including what is today the Million Dollar Highway, US 550, in the 1880s,” wrote Salek in Colorado Highways: History.

By the 1920s, Salek says the Colorado Department of Highways was spending $2.5 million annually on roads.
“Convict labor was used extensively to build roads in Colorado beginning in 1905,” says Salek. “The materials needed — lime, gravel, and stone — were quarried from an area conveniently located behind the state prison at Canon City. ... Colorado led the country in the use of convict labor until ending it in 1926.”
###
Posted by ___ Restless Native at 1:19 PM

Maintaining roads is an expensive venture. Taxes cover much of cost, but clearly it's not enough for the miles and miles of roads and highways nationwide. That's why most roads have no choice but to charge motorists with a toll. It's their only way to have the budget to properly maintain these essential infrastructures.