A pass back through history 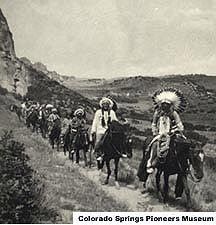 At least four different locations in Colorado bear the name Ute Pass but the ancient bison and Indian trail on the North flanks of Pikes Peak (now followed by U.S. Highway 24 from Manitou Springs up though Woodland Park and on to Divide) has wound and weaved its way into the fabric of Colorado history.
That particular Ute Pass, is the real deal.
El Paso County -- alternately the most populous or the second most populous county in the state for the last few decades -- takes its name from there. The county, one of the original 17 territorial counties garnered the Spanish designation El Paso, or “the Pass” in 1861 when Territorial Governor William Gilpin asked the new territorial legislature to extend boundaries across the entire territory. The 1860 federal census put the whole territory’s population at 38,500 at the time.
There is a good chance that the Ute Trail was first used by bison as the animals traveled from the lush, grassy valleys of South Park to milder winters on the eastern plains, notes Celinda Reynolds Kaelin in her 1999 book Pikes Peak Backcountry.
The big, hard-hoofed animals could cut a 15-inch-wide, four-inch-deep, smooth track that even the most directionally-challenged tenderfoot could follow up over the hill.
As early as 1820, white folks had noticed the trail as well.
Major Stephen H. Long, as part of his topographical survey at the time, wrote in his journal:
“A large and much-frequented road passes the springs and enters the mountains, running to the North of the high (Pikes) Peak. It is traveled principally by the bisons, sometimes also by the Indians who penetrate here to the Columbia.”
By the spring of 1860, with Argonauts crawling all over the certain steams in the territory looking for recently-discovered gold, several Kansas fellows were ready to claim the road as there own. Under a charter from the Kansas Territorial Assembly, the group doing business as the Pikes Peak and South Park Wagon Road Co., set up tollgates above Manitou Springs and tried charging wayfarers to continue on up the already well-traveled path. By June of that year, according to dispatches in the Rocky Mountain News, local settlers resisted the company’s efforts and finally forcibly removed the tollgates declaring the path a free road.
“This route, from most indications appears to have been the earliest entry way in this part of the West from the plains to the mountain hinterlands,” observes Paul D. Harrison in a November 1962 paper for the Denver Westerner’s monthly roundup. “It was depended on and used extensively by the white people.”
Harrison observes that, “Two years after the original and unsuccessful attempt of the Pikes Peak and South Park Wagon Road firm to establish a toll project on this route, another effort by local pioneers to organize and operate the Ute Pass Wagon Road Company was sanctioned August 8, 1862, by the Colorado Territorial Assembly. Among the prominent sponsors of this project were A.Z. Sheldon, Wm. H. Young and John E. Tappan. This endeavor did not get far.”
Sheldon was not quite ready to give up however, as he then enlisted the help of Rev. Wm. Howbert and others, and reformed the company 1864, but could not raise enough money. In 1865, with another group of associates, he tried again and got a mile and a quarter stretch of rockwork done before once again running out of money.
Finally, in 1871, as other roads were beginning to be used and threaten the routes dominance, “the entire local community of business men and public officials got behind the wagon road project,” wrote Harrison.
“Ostensibly as a private concern, but actually sponsored by and backed by the El Paso County commissioners, a new Ute Pass Wagon Road Co. was incorporated on April 13, 1871 to complete and operate the enterprise.”
A bond issue for $15,000 to build the road was put before the voters and carried June 20, 1871, by 153 votes to 92.
By 1878, huge freight wagons, pulled by mule teams were hauling supplies and ore back and forth from the diggings in Leadville and Tarryall.
“Great importance was attached to this highway in the pre-railroad phases of the Leadville mining boom.”
Soon the railroads would change the picture entirely. But that is another story.
Interestingly enough, most of the pass is no longer in the county that bears its name. In 1899, as gold from Cripple Creek district gave rise to new influence and political clout, Teller County was carved out of western El Paso County and the tip of Fremont County. Most of the Ute Pass is now in Teller County. 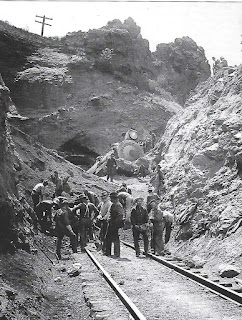 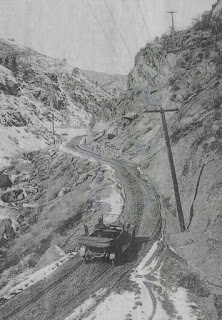 Pull a thread, and the yarn unravels

Side track as enlightening, interesting and useful as the original path we started down 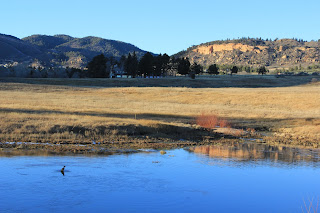 On several occasions through the years, I have been able to rely on the keen memory of Marianne Zagorski to help tell stories about the Tri-Lakes area. I would pull on a thread of history here, and somehow it was likely to unravel a yarn or two, related -- though not obviously.
In one such instance, the longtime resident was recalling how she used the aviator beacon of Beacon Light (Lite) fame at the top of Monument Hill to tell people how to get to her home near Palmer Lake.
“Those directions to which you refer were the start of what I sent expected guests to direct them to our home of the ‘60s south of Palmer Lake – “Pickwick House” on (Highway) 105.”
As often occurs in such pursuits, the side track would be as enlightening, interesting and useful as the original path we started down.
“We had six possible bedrooms as well as summer fresh-air sleeping porches with iron cots possibly dating back to Lord Pilkington. He designed the house on his hundreds of acres of completely self-sufficient ranch in 1909. He needed the night air to recuperate from TB,” wrote Zagorski to me in a letter in May of 2007.
“When we were there, the giant barn, sheds and silo still stood across the creek. A prior flood had taken their small bridge. Before moving from the U.S.A.F.A. (Air Force Academy) to Palmer Lake, we had not had a house large enough for guests.
"Pure luxury – and friends and relatives took the opportunity to visit. That ‘luxury’ referred only to space, not condition. The roof was badly disintegrating and leaks were never conquered. Also peeling plaster, handsome interior wood and brick and tile had all been plastered over, worn-through carpeting and disreputable furniture were what kept the price almost affordable and other buyers away,” writes Zagorski.
“We did not complain about the condition of the furniture as we had little ourselves. Then there was the kitchen – unbelievably bad with original very rusty sink, wood cook stove, etc… Despite all, we loved our acres and view and the creek and Hugh Nevins’ horses galloping by. We five agree, those were golden years. I suffer from the foible of aging – reminiscence! Should not have started on Pickwick.”
Ah, Mrs. Zagorski, we are glad you did. More than a few of us have lived in a place like that, in a time almost forgotten, in way that is no longer possible.
Given the opportunity, most of us would love to take a return trip.
###
Posted by ___ Restless Native at 9:04 PM No comments: 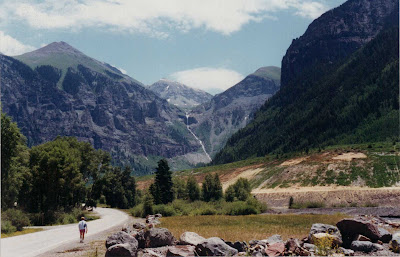 The larger city lies in one direction, the small town in the other.

In the ant’s house, the dew is a flood.
In a small town, kindness goes a long way. The smaller the town, the greater the chance an act of kindness will be noticed.
Not far from here, in a small town, an older fellow is buying groceries in the same little family-owned market he always uses. The older fellow is well known in the business. He is familiar enough that the two women working in the market know what brand of candy bars and beer he wants without a word from him.
They let him know the beer is on sale and the candy bars have been discontinued. That is excitement enough for one day, but as he leans on his cane to pull the beer from the bottom shelf of the cooler, the cane slips in a week spot of the sagging wooden floor and he nearly cracks his head on high-stacked shelves. A young man catches him just in time.
The young man helps him fish the box of beer from the lower shelf and the two women team up to check out and box his groceries. One of them asks if he is on his bike and if his dogs are with him. When they are finished, they carry the groceries out to the old man’s pickup which is parked directly in front of the store. He saunters off down the street, leaving the truck and the groceries unattended.
“He’ll be back in an hour or two,” says the woman when she returns to the register after carrying out his groceries.” He asked if I wanted to go with him.” The two women chuckle over that.
Not far from here, in a larger city, a young woman stands in the checkout line. The folks around her grumble about the length of the line but generally they are in a good mood. They find everything on their lists and the line moves quickly.
A young boy is visibly excited about the movie he has just seen at the theater next door.
“And the dumb dinosaur was named Spike,” the boy informs his mother as he stands behind the young woman.
As she looks back at the boy, the display in front of one of the wide aisles catches her eye and she remembers she hasn’t purchased the buttons she needs for the project she must take to work next week. She will have to get them later. At least she knows they have them.
Not far from here, somewhere in between the small town and the big city, a car pulls up to a stop sign at a Tee the road. The driver looks first to the left and then to the right. The larger city lies in one direction, the small town in the other.
But for some reason, the driver doesn’t know which way to turn.
###
Posted by ___ Restless Native at 4:09 PM No comments: