Familiar ground: perspective, not a bit of comfort 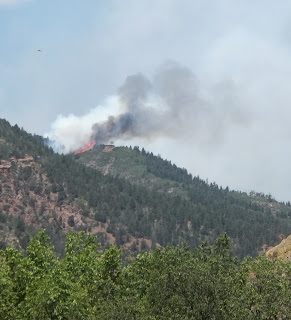 Ten years ago I said it this way.

“For three intense weeks in June of 2002, the Hayman fire, Colorado’s largest wildland fire in recorded history, ravaged our circulation area. Hayman burned over 137,000 acres of prime forest in five counties, destroyed at least 132 homes and reduced over 800 other structures to ash piles.”
Highway 24 snakes its way up through Ute Pass and the communities of Manitou Springs, Cascade, Green Mountain Falls, Chipita Park, Woodland Park and then meanders over the ridge at Divide and drops down into Florissant.
Eventually it finds its way to Lake George. The fire started a few miles northwest of Lake George and then traveled, mostly along the South Platte River watershed, torching, scorching and threatening subdivisions and our readers homes and land.
For weekly newspapers, covering breaking national spot news on deadline in the same environment with radio, TV and daily newspapers was an awesome challenge. With four full and part-time news employees covering six or seven communities 60 or 70 miles apart, it was tough getting the papers out every week. Now try to beat outfits that send teams (larger than our whole staff, publisher and paper carriers included) out for up-to-the-minute reports.
If Highway 24 was closed, we were to drop mail deliveries at the U.S. Postal Service’s Fountain distribution center at the south edge of Colorado Springs and carriers would originate from there instead of two post offices in Woodland Park and one in Cripple Creek.
Tuesday night, the fire burned up to the Manitou Experimental Forest about seven miles from town and then fell down and went to sleep. Our offices and other businesses and residences in Woodland Park were removed from standby evacuation warnings two days later.
Our fire coverage ran through much of the main news sections in the coming weeks but we also tried to dedicate four broadsheet pages in the center of the paper as an information guide for relief efforts.
As that was updated, and as needs changed, the pages became more of a forum for people in the community to give their take on what was happening.
In addition to our own staff coverage, we felt it was important to offer our readers a mix of submitted material as well. Some of the voices brought forward in our pages included a diary of the first weeks of the fire as seen through eyes of local volunteer firefighter, exceptional photos from those documenting the loss of their homes, and excellent accounts of animal rescue efforts from those involved.
For three weeks during the height of the coverage, we overran our primary product, The Ute Pass Courier. About half of the overrun was distributed free at Red Cross and Salvation Army shelters in Woodland Park, Divide and Lake George. The rest of the additional papers sold on the newsstands and to locals who continued to wander into our office for months after the fire, saying they missed the paper during the conflagration. 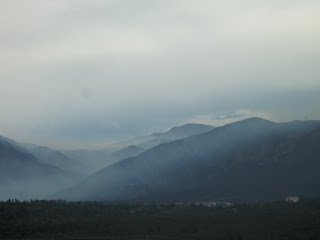 This time, with the onslaught of Waldo Canyon fire as I returned from Donkey Derby Days in Cripple Creek on Saturday, the fire trucks had already started to roll in Northern El Paso County. That night, I went down to Garden of the Gods to see what I could see, and started trying to figure out what we were going to do as a newspaper.
Intending to head up the Pass again by 10 a.m. Sunday, I ran into a few road blocks. Frustrated, I watched the ridges burn, Manitou Springs Evacuation and early evacuations in the Colorado Springs area.
A friend that we have known for years, loaned me her “binos” to gaze at the blaze from a parking lot in Manitou. She said they were on pre-evac notice where they lived in northwest Colorado Springs and I offered a place to stay.
Not long afterward (the days tend to run together), with a wind change, tinder-dry fuel and weeks of record high temps, the fires of hell were burning over the Queens Canyon Ridge, into Mountain Shadows subdivision, our friends were taking us up on that offer.
We watched the evil red glow that night from my backyard, and the epic towers of flames, as the reporter explained to his son what to hope for, in terms of survival of their house. Additional evacuations and pre-evac notices, watching, waiting, trying to think of ways to make a difference.
We talked also of the historic significance -- perhaps the use of dynamite, like they did in the Gold District 100 years ago.  The Waldo Canyon Fire, like the Hayman, would obviously be one for the record books, but perhaps leave an even deeper scar in our collective psyche.
In the case of Hayman, for years afterward, we continued covering the fire in various aspects. The effects on the tourist-reliant business community, the government responses, the cleanup, the flooding, and all the evaluation and Monday morning quarterbacking were continuous elements of our weekly products. Personally, I know I will always remember how ragged we felt, even months after the intense initial three weeks of baptism by fire.
Today, talking with survivors of Hayman and Waldo Canyon, hearing about their experiences still brings back images in my mind of that weird pink, smoky glow on ridges above Woodland Park, and now, the fires of hell burning over the ridges just south of here.
###