Back to the future and blinded by science 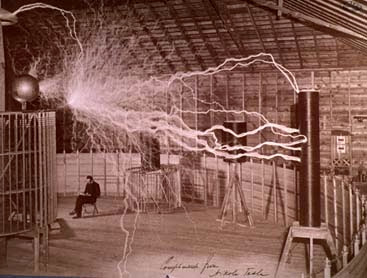 “Brethren, we have a message from another world."

By Rob Carrigan, robcarrigan1@gmail.com
Like any self-respecting city of its size, Colorado Springs has its own nutty professor story, and it is a good one.
Born in Croatia and educated as an engineer at Polytechnic School south of Vienna, Nikola Tesla could speak nine languages and had become quite popular in investment circles by the beginning of the 1890s. Having worked for Edison Machine Works, but unable to interest founder Thomas Edison on his ideas about alternating current (AC), Tesla formed his own company, Tesla Electric Light and Manufacturing. George Westinghouse, seeing the promise in that work, bought Tesla’s patents and set him to work as a designer.
His efforts made him a celebrity in the United States and Europe and allowed him to participate in projects such as powering the 1893 Worlds Fair in Chicago, and by demonstrate wireless transmission of power by lighting bulbs with no wires attached. He believed wireless communication would be the wave the future, imagining first, such ideas as the basis for fax machines, cellular transmissions, garage door openers, radio and TV and cable. Unfortunately, though correct with his science, he was about 90 or 100 years premature with some of his ideas.
Here in Colorado however, his technology was successfully deployed with his AC transmission systems powering the mining camps of Cripple Creek and Telluride, as well as a hydroelectric plant at Niagara Falls that established his AC current as the dominant transmission mode.
“A friend and patent lawyer, Leonard E. Curtis, on being advised of Tesla's work, offered to find land and provide power for the research from the El Paso Power Company of Colorado Springs. The next supporter to come forward was Colonel John Jacob Astor. With $30,000 from Astor, the inventor prepared at once to move to Colorado and begin building a new experimental station near Pikes Peak. Joining Tesla were several assistants who were not fully informed of the inventor's plans,” according Tesla, Life and Legacy at PBS.org.
“The laboratory that rose from the prairie floor was both wired and weird, a contraption with a roof that rolled back to prevent it from catching fire, and a wooden tower that soared up eighty feet. Above it was a 142-foot metal mast supporting a large copper ball. Inside the strange wooden structure, technicians began to assemble an enormous Tesla coil, specially designed to send powerful electrical impulses into the earth.”
The experiments had their drawbacks however, including burning up the dynamo at El Paso Power Company and knocking out all power in Colorado Springs. Working for about nine months in his Colorado Springs lab, his popularity waned, as his findings were difficult to grasp for investors and others that followed his exploits. Increasingly, he was considered eccentric and perhaps a bit of a ‘nut job.’
Popular reports in the papers didn’t help at all to defuse that idea, as noted in the following account in the Rocky Mountain News in January of 1901 headlined “Tesla will talk with Mars from Pikes Peak.”
“… I have observed electrical actions which have appeared inexplicable, faint and uncertain though they were, and they have given me a deep conviction and foreknowledge that before long all human beings on this globe, as one will turn their eyes on the firmament above, with feelings of love and reverence, thrilled by the glad news:
“Brethren, we have a message from another world, unknown and remote. It reads:
One. One, two, three.” (signed) Nikola Tesla.

Give me one more for the ditch 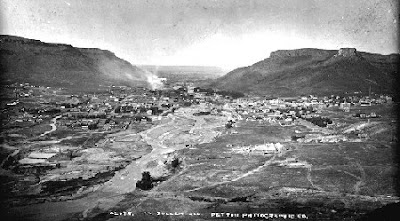 I am old enough (just barely), to remember when hunters in the state from points south and east, would load up their trucks upon returning home, with cases of Coors beer because they couldn’t buy it back wherever it was the wandered in here from.
Coors was at one time a very regional beer. That makes it somewhat interesting to see how much dissing the brand gets in micro-brew circles.
In the early eighties, when Anheuser-Busch was trying to get approval in Fort Collins to build a brewery, some beer-addled friends of mine worried that another major brewery would somehow displace ‘Colorado Kool-Aid’
The friendly competition only fermented a major micro market there in Fort Fun, and the emergence of heavy hitters like New Belgian, O’dells and others. Colorado became the number one beer-producing state in the nation and the home to hundreds of breweries.
Today -- in an age when Coors has merged with Molson, and then again with Miller -- and boutique beer batches appear on every Colorado corner, it makes you think fondly about the old days of two-port, press-top cans and ‘stubbies’ from days of yore.
Naturally, the marketers have some ideas on how to capitalize on that nostalgia bent.
So let’s make beer like they did before Prohibition.
“Batch 19, being test-marketed in five cities, is a throwback to a pre-Prohibition lager. Coming from the large beer factory in Golden, the beer is surprising for its hoppy character and its carbonation. If it every reaches the general market, it should be a great success,” writes Dick Kreck in the Denver Post.
According to Kreck’s report, “Brewmaster Keith Villa found the recipe for the Coors pre-prohibition brew stashed in the company’s basement archives and was immediately intrigued by what he found.”
Only one drawback, the five cities it is being marketed in are; Chicago, San Francisco/San Jose, Washington, D.C. and Milwaukee. Oh yea, Colorado can get a little taste by taking the ‘short tour’ (or the long one) at the tasting room in Golden and it will be featured at Great American Beer Festival in Denver in September.
The name is supposed to evoke the idea that with Prohibition becoming the law in 1919, and beer being outlawed (except for medicinal purposes) until repeal in 1933, this brew will take you back.
The only problem, as I see it, is that Colorado, along with five other states, went dry three years earlier than the rest of the country, in January of 1916.
Details, details, details. But isn’t that what the brewing art is all about. Somehow, for marketing purposes, “Batch 16” just didn’t have the right ring to it.
###
Posted by ___ Restless Native at 9:34 PM No comments: 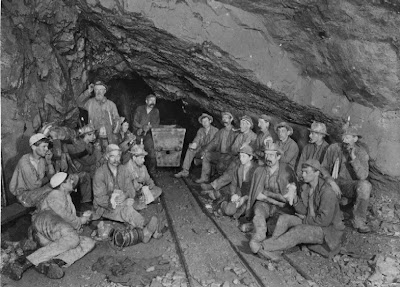 Knockers, were departed spirits of miners who had passed from this life, on to the next

Here in the hard rock camps of Colorado, where the mountains are full of riches, the stories of "the knockers" will be found below.
The Cornish, miners for at least a thousand years, arrived in droves during the 19th century in the American West as the copper and tin played out in their native Cornwall.
Often labeled "Cousin Jacks," reportedly because mine owners valued their knowledge and experience so much, they were always asking "don't you have cousin, back in Cornwall that would like to come here to United States and work for us?" The miners seemed to always have a cousin 'Jack,' back on the Celtic Sea that wanted to relocate.
With them, came their peculiar way of speaking, ancient stories and traditions.
The language of the mines was heavily influenced. The Cornish word 'shaft' described a vertical hole. Horizontal tunnels were 'levels' and 'winzes,raises, and adits' all derived from Cornish origins.
As did the lunch pail, the miners candlestick, "Cornish pump" and the signal code for communicating to the hoist operators in the mines.
In the dark, strange underworld of the hard rock mine, it is easy for your imagination to run away with you and the stories.
"Knockers," according to lore, were the departed spirits of miners who had passed for this life and on to the next.
If you were miner trying to earn living beneath the earth, the knockers could be for you, or against you, dependent largely on how you treated them. Unlike the aliens of Stephen King horror novels, most knockers of Cornish legends were generally thought of in favorable terms.
Like the Irish Leprechauns, the knockers were wee people and the creaks, drips, groans, knocks and other sounds of underground work were often attributed to them and given special meaning.
"Miners hear eerie sounds working underground. Sounds made by the earth moving along fault lines, miners in distant tunnels setting off dynamite charges, and whirring machinery echoing off tunnel walls - all could be attributed to Tommyknockers," wrote Tim Willoughby in recent column in the Aspen Times.
"Sounds of dripping water, braying mules and creaking mine cars were compounded by total darkness."
Some miners tried to be nice to the knockers by leaving offerings of left-over lunch, fashioning small clay figures of the spirits to please them, avoiding whistling while working (because it was said to bother them) and speaking only in positive terms on their behalf.
Any deviation from said course could bring on a round of bad luck in the form of cave-ins,'dry holes,' missing tools, and deadly accidents. Being nice to them could result in their help finding the 'mother lode' or warning you away from a dangerous cave-in or other accidents.
The dwarf-like, tapping creatures were often heard in the depths of the mines but seldom seen. In fact, it was considered an ominous warning if you were to catch a glimpse of the little fellows. Seeing them in the mines could bring on more misfortune than a red-headed woman's presence in the mine (red-haired women were considered omens of death.)
Also called Bucca, or Bwca by the Welsh, the knockers origins are sometimes referenced as ghosts of Jewish slaves, brought to mines in Cornwall by Romans to work in the Iron age.
But here in the West, the knockers took on legendary status as illustrated by following poem penned in 1910 by Anthony Fitch.

'Av you 'eard of the Tommy Knockers
In the deep dark mines of the west
Which the Cornish miners 'ear?
an 'tis no laughin'jest,
for I'm a Cornish miner,
An' I'll tell you of it today,
Of the 'knock-knock-knock" of a tiny pick,
As we work in the rock an' clay.

We go down in the skips with our buckets,
With 'earts which nothing fazes,
Each man with a candle to light the way,
Through the tunnels winzes an' raises,
An' the stale air smells of powder,
An' the mine is full of sound,
But 'tis only the noise of a Tommy Knocker
Which makes our 'earts rebound.

"Pick...pick...pick"
Someone be 'ind us knocked,
Pick...pick...pick
'tis souls of dead miners
For they're locked in the earthen wall,
Those that found death down there.
An' tis the "knock-knock-knock" of their pick
W'ich makes on end stand our 'air.

So we leave the 'aunted place,
(For we won't work where they be)
An' we 'erever we'ear them knockin'
We sure will always flee.
For it means w'oever 'ears it
Will be next in line,
The pick, pick, pick, of the Knockers
Is a last an' awful sign.