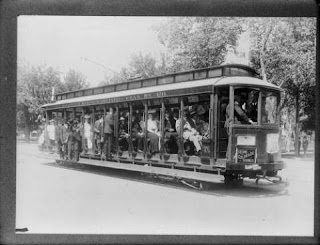 Two bandits ordered the two streetcar employees to "Throw up your hands."

Thomas Lawton, a 23-year-old ranchhand from a spread near Divide, had the dubious distinction of being the first to swing legally for a crime committed in El Paso County.
According to a June 8, 1952, article by Bill Young in the Colorado Springs Free Press, Lawton was sentenced to be hanged on April 13, 1892 for the murder of Colorado Springs streetcar motorman John Heming. Lawton was executed on the gallows at Canon City at 10:19 p.m., Saturday, May 7, 1892.
Lawton and 18-year-old Albert Russell apparently started the chain of events on the moonlit night in August the previous summer when they left their jobs on the ranch near Divide to attend a circus in the Springs.
According to testimony that came out in a later trial, Lawton was sweet on a young lady at Fountain and decided they didn't have enough money to properly enjoy the circus. Thus, they hatched a plan to holdup the streetcar.
At the north end of the Roswell-Cheyenne Canyon streetcar run near the platform, Lawton and Russel encountered motorman Heming and Conductor L. A. Ward on the car about 9:30 p.m., Aug. 6, 1891, and the younger of the two bandits ordered the two streetcar employees to "Throw up your hands."
"I guess not," Heming countered, according to testimony, and he dived for the boy.
As Heming grabbed for the old cap and ball pistol in the youth's hand, his weight carried the struggle out of the cart and on to the platform. At that point, there was a muzzle flash from the other bandit's Colt .41 caliber handgun and Heming stiffened, slumped and loosened his grip on the younger assailant. The two holdup men fled on horseback.
Afterwards, Conductor Ward started the car and sped back into the Springs for help.
"The citizens of Colorado Springs — riled over the death of the popular 40-year-old motorman — immediately organized a posse and put up a $500 reward for the capture 'dead or alive' of the murderers," Bill Youngs' report said.
But it was months before the would-be bandits were apprehended.
In fact, the younger of the pair went to the police with his story of what happened the night of the murder, reportedly because his own life had been threatened by Lawton. He also claimed Lawton wanted to go back and "finish off" the conductor.
Lawton denied everything. But conductor Ward's description (he noted the holdup man was short and slight in build, fair complexioned and with a small mustache) — and other details meshed with Albert Russell's version.
News reports of the trial identified the odd countenance of Russell, however.
"Russell had a rather repulsive face," the news accounts said, "with a retreating yet bulging forehead, wandering eyes, a mouth that retreats from his nose, an underlip behind the upper one and chin still retreating from his very peculiar voice."
The peculiar voice was described as an "English accent which left the carpet about the chair covered with dropped H's before he finished testifying."
Lawton maintained his innocence to the end.
"He was only 24 and when dressed in the new suit made especially for him and was all ready for the gallows, he presented rather a neat and attractive appearance. But he showed signs of weakness about 6 p.m. as the execution time drew near he broke down completely, moaning and wailing in a frightful manner," said newspaper accounts of the execution.
"Shortly after 10 he appeared calmer and all within the death chamber was silent as stepped forward to have the noose adjusted. Little time was lost and 30 seconds after he stepped on the platform, the body of Thomas Lawton was dangling in the air."