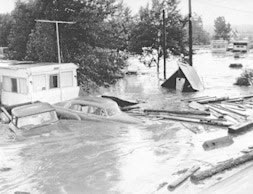 In the Tri-Lakes area, citizens have a reputation to uphold for pulling off a grand Independence Day celebration every year. But the last weeks in June and the first weeks of July in 1965 were particularly challenging as area residents dug out, mopped up and began rebuilding in the wake of devastating floods, tornado and mud slides.
“Washouts strand hundreds,” “Flood Claims Three Lives Locally,” and “Tornado Tears through Tiny Palmer Lake,” read the headlines in Palmer Lake – Monument News at the time.
“Wednesday, June 16, 1965, when a tornado hit Palmer Lake, letting loose a torrential rain following a day-long rain. Waters accumulated from the run-off down through East Plum Creek and West Plum Creek, various gulches, converging at the south entrance Castle Rock, washed out all the bridges enroute,” according to the News. “Flooded Plum Creek emptied into the Platte and continued washing out bridges, buildings down through Denver.”
The event was labeled the “greatest calamity in Colorado history” and the flood waters rolled on through Nebraska and Kansas. President Johnson honored Governor John Love’s request to declare a disaster area and crews from Lowery Air Force Base, The Air Force Academy, Fort Carson and elsewhere, offered rescue and support with helicopters, buses and housing. Additional helicopters were requested by Maj. Gen. Joe C. Moffitt, adjutant general for Colorado, from nearby states.
Two women were pulled out from under the rubble of their collapsed houses by Palmer Lake Residents and a crew from the Air Force Academy after Monument Creek washed away the foundations. Over 120 4-H club members stranded at Pinecrest, with 25 adult leaders, were finally ferried across a swollen stream a day later and transferred to a shelter at Churches in Colorado Springs. The historic Little Log Church survived high winds but Rev. Russell Jones lost most of his roof in the adjoining structure. Palmer Lake Postmaster Reda Bradley reported that it blew out windows and ripped the door from the building.
Army and Air Force generators were brought in to provide electricity, Mountain States Telephone, Inc. strung six lines in for emergency service to rescue crews and the 7th Engineer Battalion from Fort Carson brought in water purification equipment. Soldiers and engineers from Fort Carson were able to preserve Monument Lake Dam by stacking hundreds of sandbags at a low point there.
By the July 1 edition of the local paper, water was still flowing in Palmer Lake streets but “it’s drying up and things are looking better.” Grading crews from the Academy continued to help in the cleanup. But area residents didn’t let recent events pull them away from a proper observance of the nation’s birthday.
“The Monument Lake Resort will be the setting for the Palmer Lake – Monument Annual Fourth of July Fireworks Display,” read the paper’s local announcement.
The festival featured a barbecue and was sponsored by the following organizations:
Cities of Monument and Palmer Lake, the Monument-Palmer Lake Kiwanis Club, the Monument Lake Resort, and the Texaco Service Station.
“Everyone is invited to enjoy the Barbecue and to be thrilled by the biggest and best display of fireworks ever presented in this area,” according to an optimistic dispatch in the same News reporting ongoing flood and tornado cleanup efforts.
###
Posted by ___ Restless Native at 8:49 PM