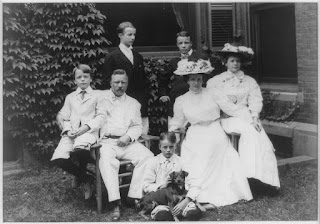 Newly-elected Roosevelt also made friends with a dog, as relayed to his son in letters at the time

“Blessed Kermit," wrote vice-president-elect Theodore Roosevelt to his young son.
"I was delighted to get your letter. I am sorry you are having such a hard time in mathematics, but hope a couple of weeks will set you all right. We have had a very successful hunt out here in Colorado. All told we have obtained ten bear and three bobcats. Dr. Lambert has been a perfect trump. He is in the pink of condition, while for the last week I have been a little knocked out by the Cuban fever. Up to that time I was simply in splendid shape."
Friends of Roosevelt, Philip Stewart, of Colorado Springs, and Dr. Gerald Webb felt a vacation for their friend was necessary. Roosevelt had just survived the rigors of a national election and would soon answer to the challenges of the second highest office in the United States. They proposed a month-long mountain lion hunting expedition to Colorado for early 1901, Roosevelt eagerly accepted.
The newly-elected Roosevelt also made friends with a dog, as relayed to his son in letters at the time.
"There is a very cunning little dog named Skip, belonging to John Goff’s pack, who has completely adopted me. I think I shall take him home to Archie. He likes to ride on Dr. Lambert’s horse, or mine, and though he is not as big as Jack, takes eager part in the fight with every bear and bobcat.
I am sure you will enjoy your trip to Deadwood with Seth Bullock. I have now become very homesick for Mother, and shall be glad when the 12th of May comes,” wrote Theodore to his son Kermit.
Roosevelt arrived at Stewart's Colorado Springs home the morning of Jan. 10, 1901. By September, he would be president, after the assassination of William McKinley.
That day, he, Stewart, and Webb boarded a Colorado Midland train and arrived in Rifle that evening. After spending a night at Rifle's Clark Hotel, his hunting party boarded a tally-ho driven by Gates Kersburg for the 40-mile trip to the hunting camp. At Rifle, he greeted a few citizens, but in general shied away from public engagements. Seeking a quiet vacation, the press was not invited to the hunt, according to reports in the Glenwood Post Independent and the Rifle Citizen Telegram.

Within days, reports of Roosevelt shooting his first of what would be 12 mountain lions in Colorado were made public. With no press to cover the event, fanciful fabricated stories regarding Roosevelt's hunting prowess proliferated. These stories Roosevelt refuted when he returned.
On Feb. 15, the hunt ended. As he boarded a Colorado Midland train in Rifle on Feb. 16, he greeted citizens. Excited residents of New Castle eagerly welcomed him at his stop there. Wishing an additional dimension to his trip, he asked the train engineer at New Castle if he could ride in the engine to Glenwood Springs. The engineer happily obliged.
Roosevelt vowed to return to Colorado for another hunt. He made good on that promise in 1905 as president of the United States when he and Goff reunited for his famous bear hunt on Divide Creek near New Castle.
As promised, Roosevelt was given a black and tan feist-type dog named Skip by John Goff during his 1905 hunting expeditions in the west. Many have claimed this dog to be a rat terrier but in reality he more closely resembled the old black and tan terrier or Manchester. An often-recited story is how this terrier helped rid the White House of rats in 1906 but in fact, two dogs and some ferrets owned by local pest exterminator named Barclay were actually used to take care of the rat business.
This story was so often recited that when the Rat Terrier Club of America wished to separate the short legged variety from the longer legged they named the short legged variety the Teddy Roosevelt Terrier in honor of Mr. Roosevelt's supposed participation with the breed.
That is the story of how the Western Slope dog from Meeker and Rio Blanco County ended up in the White House, befriended by the president's children.