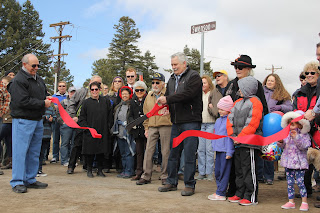 Kevin M. Swenson  passed away September 22, 2017 after a heroic battle with cancer.

Dozens of well-wishers turned out in chilly, gusty weather Saturday morning to shake long-time Monument Police Officer Kevin Swenson’s hand and help the town rename a road after him. The road, which has been there for probably 125 years or more, meanders west off of Mitchell Road leading to Monument Lake.

Swenson was the first officer here in the Town of Monument’s separate Police Department, and served for nearly 34 years from Jan. 18, 1978, until Dec. 13, 2011. His badge number was 1. Police Chief Al Karn, who recently passed away, was the first employ of the department after the separation from a single force under El Paso County Sheriff for Monument, Palmer Lake and Woodmoor, arriving only a year before Swenson.

A few hours after the dedication and ribbon cutting of the new road, many in attendance were planning to gather about 100 yards away in memory of Karn, at Si Sibell's barn. Karn passed away earlier this month and Swenson paid tribute to his former chief prior to the dedication of the road.

Rick Tudor, who said his badge was Number 2, was also in attendance, even though he now lives nearly seven-hours driving distance away Thermopolis, Wy. City officials, former officials, citizens, business owners and city employees blocked the roadway temporarily, cut a red ribbon in honor of the event, and unveiled the new street sign.

“It has changed a lot,” said Swenson Saturday about policing here in town from the time he started in the late 1970s. “I knew all 365 people in town of Monument at the time.”

In fact, he said, he even delivered welcome packages to any newcomers for a longtime that included a new phone book, map and some other stuff.

“It was much more of dealing with people on a one-to-one basis then,” he said of his early duties and described himself as a “Citizen’s Officer.”

“We, at times, would would give someone who had too much to drink at the bowling alley a ride home, so they wouldn’t try to drive it.”

They could be short-staffed back then, necessitating some creativity.

“We actually would park a car on Front Street sometimes with “Officer George,” a dummy in the driver’s seat. “It was alright for a short period,” he said. “But we got a lot of calls about ‘Officer George’s’ welfare if we didn’t move him pretty often.”

He counts among his firsts at the department, writing a grant for the department’s first computer (remembering it a K-Pro of some kind) and the first Intoxilizer to check for inebriation, the first Radar gun, and was even one of the first bicycle officers.

Swenson was the first officer here in the Town of Monument’s separate Police Department, and served for nearly 34 years from Jan. 18, 1978, until Dec. 13, 2011. His badge number was 1. Police Chief Al Karn, who recently passed away, was the first employ of the department after the separation from a single force under El Paso County Sheriff for Monument, Palmer Lake and Woodmoor, arriving only a year before Swenson.

“When we first started, we were working out of the trunk of the patrol car,” he said, later sharing part of a laundry mat, small trailers, various other office setups, and finally the current police department in town hall.

He has a number of memorable arrests to recall including the time he noticed someone climbing through the broken glass door of a Chinese restaurant in the strip center near King Sooper on Baptist Road. “That led to a high-speed chase and shots being fired at me, before they finally ditched the car.”

He has other stories involving chasing cattle off the Interstate, and military vehicles, complete with M-16 mm machine guns and lives saved and people who have turned their lives around. Swenson served under six different Chiefs and probably close to 30 different mayors, he said.

For the last few years, his struggle has been with his health, forcing his retirement. First suffering emergency gallbladder surgery and complications, that kept him hospitalized for eight months, and in and out of the hospital for nearly two years. Then finding out that he had stomach cancer, he has been on experimental Chemotherapy for four years.

Interestingly, however, the journey has brought him around almost full circle.

“After being a mechanic in the Air Force for 6 years, 8 months, 28 days, during Vietmam, I did several things here in Monument from 1975 to 1978. After discharge, I was a lifeguard out at Monument Lake. They had a roped off area for swimming there with a slide on a floating platform. That is where I started training in first aid, CPR, and became EMT, drove an ambulance for a while.” Because of the that the road to the lake has particular significance. 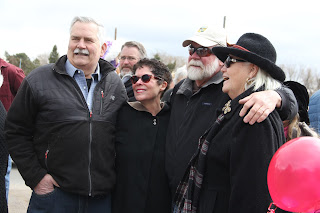 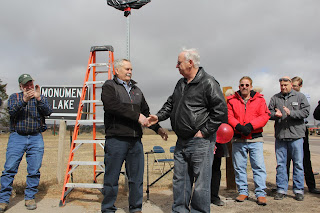 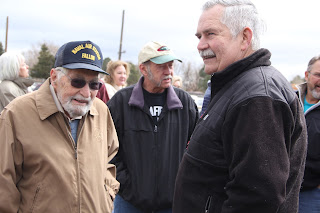 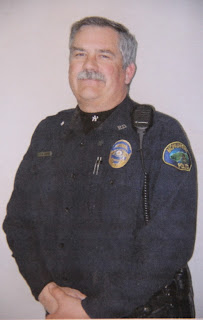 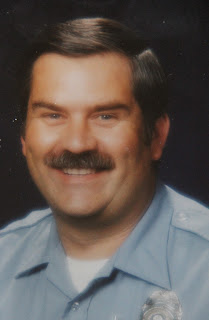 Just a few things I inherited from my granddad 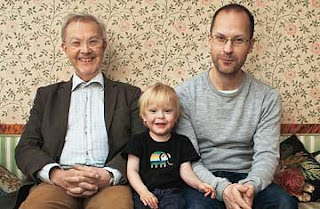 You are what your grandfather ate

Rain or shine, good times or bad, my grandfather always answered same way.
When anybody asked him, “How is it going?” or “How are you?” or “How do you do?”
His answer was always the same: “Still eating.”
He had other little endearing comments and sayings of course (for example, calling black table pepper the Sioux word for fly poop).  But “Still eating,” was his trademark and it reflected his hardscrabble existence as a homestead rancher on the Western Slope of Colorado.
Owen Carrigan, my granddad, filed his first Colorado homestead claim 1914. After subsequently 'proving up' on that, and additional filings, he ran cattle, sheep and other livestock and harvested alfalfa hay for nearly half a century on Morapos Creek near the Hamilton turnoff, between Craig and Meeker. Prior to that, he hailed from Minnesota country, by way of the Dakotas. He came here to escape Asthma and finish recovering from a broken leg he suffered when a horse fell with him while punching cows for a Texas-owned outfit in the Dakotas.
His mother, my great grandmother, Minnie Buce Carrigan, wrote the popular book “Captured by the Indians, Reminiscences of Pioneer Life in Minnesota.” It is an account of the murder of her father, mother, two sisters, and her subsequent captivity among the Sioux after the 1862 uprising and her later experience as an orphan. In the book, she describes her life as a young German immigrant girl prior to her capture and the ten weeks she lived with her captors until being freed by the United States Army.
I guess that was why I was fascinated by a recent Radiolab piece airing on National Public Radio.
"Lars Olov Bygren, a professor at Umeå University in Sweden, grew up in a remote village north of the Arctic Circle. It wasn't an easy place to be a kid, and he has cold, hard data to back him up: book after book of facts and figures on the lives of generations of the town's residents, from their health to their financial success, to detailed records on the boom and bust years for crops. The numbers tell a story of wild swings in fortune — feasts one year, harsh winters and famine the next. Looking at all those records, Olov realized he had a natural experiment on his hands. Along with Sam Kean, Olov explains the bizarre ripples through time that he discovered ... ripples that are totally unexpected, and honestly, sort of terrifying," says the podcast Radiolab.
The village, according to Time Magazine's John Cloud article in 2010, is both unique in its record keeping and it's isolation.
"Norrbotten is so isolated that in the 19th century, if the harvest was bad, people starved. The starving years were all the crueler for their unpredictability. For instance, 1800, 1812, 1821, 1836 and 1856 were years of total crop failure and extreme suffering. But in 1801, 1822, 1828, 1844 and 1863, the land spilled forth such abundance that the same people who had gone hungry in previous winters were able to gorge themselves for months," according to a recent
Back in the 1980s, Dr. Bygren, a preventive-health specialist, now at the prestigious Karolinska Institute in Stockholm, began to wonder what long-term effects the feast and famine years might have had on children growing up in Norrbotten in the 19th century —and not just on them but on their kids and grandkids as well," said the Time Magazine piece that I read as research after hearing the Radiolab podcast.
So Dr. Bygren drew a random sample of 99 individuals born in the Overkalix parish of Norrbotten in 1905 and used historical records to trace their parents and grandparents back to birth. By analyzing meticulous agricultural records, he and two colleagues determined how much food had been available to the parents and grandparents when they were young.
"For instance, Bygren's research showed that in Overkalix, boys who enjoyed those rare overabundant winters — kids who went from normal eating to gluttony in a single season —produced sons and grandsons who lived shorter lives. Far shorter: in the first paper Bygren wrote about Norrbotten, which was published in 2001 in the Dutch journal Acta Biotheoretica, he showed that the grandsons of Overkalix boys who had overeaten died an average of six years earlier than the grandsons of those who had endured a poor harvest. Once Bygren and his team controlled for certain socioeconomic variations, the difference in longevity jumped to an astonishing 32 years. Later papers using different Norrbotten cohorts also found significant drops in life span and discovered that they applied along the female line as well, meaning that the daughters and granddaughters of girls who had gone from normal to gluttonous diets also lived shorter lives," the Time Magazine story said.
Basically the data suggested that a single winter of overeating as a youngster could begin a biological chain of events that would lead one's grandchildren to die decades earlier than their peers did.
In essence, "you are what your Granddad ate," to some extent.
The findings were particularly pronounced in what your ancestor ate in the formative years time frame of 9-11 years old.
That must have been about the time Owen Carrigan, "Granddad" as I knew him, starting cowboying from Dakotas to Arizona, and Texas. And he might have developed the "Still eating" signature response from the sporadic nature of a trail chuck wagon existence.
For my part, that could be either good or bad. But either way, if you ask how I'm doing, I will tell you. "I am still eating."
Posted by ___ Restless Native at 11:23 AM No comments: