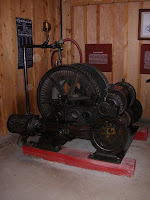 Dismembered bodies were tangled with the wrecked machinery

In one of the most tragic accidents in the Cripple Creek mining district, 15 miners lost their lives just going home from work at the Independence Mine. Or was it an accident?
The January 28, 1904 edition of the Victor Daily Record noted that "The 15 bodies of the Independence accident were brought from the shaft house early yesterday morning to the two undertaking parlors in this city."
"Incidentally, the hoist itself is now at the Western Museum of Mining and Industry north of Colorado Springs, " said noted mining historian Ed Hunter in 2004. "We hope to finish up the brake installation before too long so that the hoist can be available for museum visitors to inspect. It sits in a simulated hoist house behind the old Elkton Mine Headframe erected on the ridge to the south of the museum's main building."
Hunter, at the time, also graciously turned me on to several accounts, each from a different perspective, on what happened with that accident.
John Hays Hammon's autobiography is one of the sources identified.
"We took all possible precautions to protect our miners. One night after an inspection of the underground operations, I ascended the shaft and returned to the manager's house where I was staying at the time. I had just gone to bed when word came of a bad accident at the mine," wrote Hammon.
"Dressing as we ran, the manager and I hurried back to the shaft house I had just left. It was a shambles. Dismembered bodies were tangled with the wrecked machinery. In an attempt at sabotage, some (union) member had greased the brakes of the hoisting engine. As the cage filled with men, rose to the surface, the brakes refused to grip and the cage shot up into the gallows frame. The engineer, helpless in the face of this horror, ran screaming from the spot. I was overcome by this brutal deed," Hammon wrote.
Hunter also tabbed "Hard Rock Epic, Western Miners and the Industrial Revolution, 1860-1910" by Mark Wyman as an interesting read. In it, there is a first-hand account by James Bullock, the sole survivor, as told to the coroner's jury.
" ... We kept going right along but it kept slipping; we would go a little ways and then we would slip again; then he took us about six feet above the collar of the shaft, then he lowered us back down."
When asked if the engineer stopped six feet above the shaft, Bullock replied.
"He stopped for just a second or two; then he lowered us and it must have gotten beyond his control, for we dropped about sixty or seventy feet, we were going pretty fast. We said to each other we are all gone. Then he raised us up about ten feet; then he stopped us and it slipped back again about two feet; then he tried and started us again, and we went to the sheave wheel as fast as we could go."
Also in Mark Wyman's book had an account from the hoisting engineer, when said he discovered the brakes were not working when he tried to connect them as the cage reached the 200-foot level. The engineer is not identified by name but his account follows.
"I tried them several times but that time the cage was at the collar of the shaft. I immediately reversed the engine and sent the cage back 100 feet. I again tried the brakes, reversed the engine and brought the cage to the surface. The brake still stuck; I could not move it. I again reversed the engine and sent the cage back about the same distance and stepped to the other side and took hold of the other brake, it was in the same condition. The second time the cage came to the surface, I called three times for the shift boss, for God's sake come and help me put on the brakes. In the meantime, I was reversing the engine backwards and forwards. Mr. MacDonald came and two other men with him. I said come up and help me put on the brakes, and then I discovered the hood of the cage above the collar of the shaft. I immediately reversed the engine but it was too late."
Hunter points out that John Hays Hammond book was published 31 years after the event and there is no way to prove or disprove his allegation of greased guides.
"The years seemed to have dimmed his memory on a couple of discrepancies in other details but in all fairness, greasing could have been the culprit. In no way does this excuse the omission of shaft safety devices noted by the mine inspector," said Hunter.