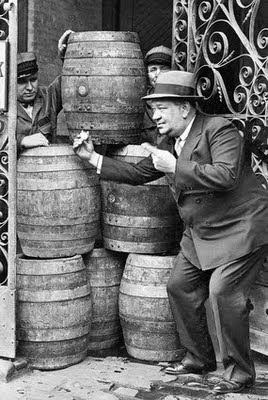 Mother's in the kitchen washing out the jugs, Sister's in the pantry bottling the suds, Father's in the cellar mixing up the hops, Johnny's on the front porch watching for the cops.
--Prohibition song

By July of 1933, everyone, including Time magazine was eagerly anticipating the repeal of the 18th Amendment, which prohibited the legal consumption of liquor. “Repeal by Christmas,” suggested a headline in the July, 31, 1933 edition.
The news magazine said that it “looked so close last week that even a good professional Dry like Prohibition Director Alfred Vernon Dalrymple was in favor of letting distilleries resume production immediately under government license to stock up for the coming deluge.”
According to Time then, there was only about 6,000,000 gallons of medicinal hard liquor under government bond and the periodical speculated that the country would gulp that all down in a few weeks.
“Because it takes four years to age real whiskey, an acute domestic liquor shortage looms unless production is again permitted. As it is unlikely that the Federal Government will grant that permission in advance of final Repeal, foreign liquor manufacturers have amassed enormous surplus stocks for shipment to the U.S. at a moment’s notice.”
Time quoted Dalrymple who had recently spent years chasing bootleggers.
“There is no use to kid ourselves and there isn’t any use in delaying the start of liquor manufacture. It will mean putting hundreds of thousands of men back to work and it will mean hundreds of thousands of dollars of new business.”
That July, Arkansas had taken the Repeal effort past the halfway mark, though Drys charged that Wets had paid the poll taxes of indigents in return for their votes and the Arkansas Attorney General warned that under state law, it was still “as dry as a camel’s tonsils.”
“Tennessee gave the Repealists their first scare when it turned in a wet majority of only 9,000 out of nearly 250,000 votes. Memphis and Nashville were barely able to overcome the Dry strength of Republican moonshining East Tennessee,” according to Time.
Oregon refused to listen to William E. (“Pussyfoot”) Johnson, who stomped out of the State declaring his Dry campaign had been a failure and the U.S. was “in for a five year drunk.”
Colorado had scheduled a vote for Sept. 4 and Postmaster General Farley was quoted by Time as saying, “The country is safe. We will have Repeal by Christmas. The President agrees with me.”
That September, the majority of Coloradoans suspended the state’s prohibition laws and then voted two-to-one to ratify the 21st Amendment to repeal National Prohibition. Vestiges of temperance remained for years however, such “Blue Laws” prohibiting the sale of alcoholic beverages on Sunday, until as recently as 2008.
In the Nov. 18, 1933 edition of the Literary Digest, it was noted “National Prohibition has less than three weeks to live. On Tuesday, December 5, the thirty-sixth State convention will ratify the 21st Amendment, repealing the 18th Amendment, which came into effect less than 14 years ago, on January 16, 1920.”
It took only about eight and a half months from submission to Congress of the 21st Amendment to ratification by 37 State Conventions.
“The pathway to national repeal is now clear. Speculation and forecasting is over. It has been ruled that not even a formal proclamation from Washington is necessary to bury the 18th Amendment,” said the Digest.
Here in Colorado, the Dec. 6, 1933 edition of the Rocky Mountain News led with “Repeal Celebrators Find Liquor Lacking,” calling attention to the shortage of legal stuff the night before.
“The death of prohibition was being toasted tonight largely with the same illegal liquor used to flout the 18th Amendment’s existence. Officials ruled that bonded liquor in warehouses could not be removed for distribution to wholesalers and in turn to retailers, until Utah formally ratified repeal… There were only about 3,000,000 gallons of rectified liquor on hand on which taxes had been paid.” Utah formally ratified the law later the same evening.
###
Posted by ___ Restless Native at 7:54 PM No comments: 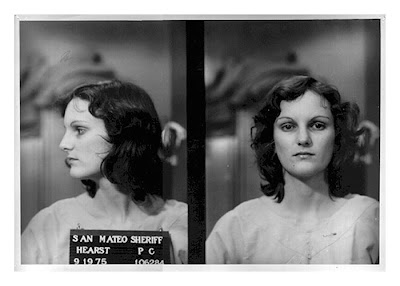 According to legend, the Púca is an adroit shapeshifter, capable of assuming a variety of terrifying forms. It may appear as an eagle or as a large black goat, but it most commonly takes the form of a sleek black or white horse with a flowing mane and glowing yellow eyes. In parts of County Laois, the pooka becomes a huge, hairy bogeyman who terrifies those abroad at night; in Waterford and Wexford, it appears as an eagle with a massive wingspan; and in Roscommon, as a black goat with curling horns. By the beginning of the 21st century, depictions and conceptions of the Púca have changed from a fierce, terrifying spirit to a harmless, shy, garden-gnomish. The Púca is a creature of the mountains and hills, and in those regions there are stories of it appearing on November Day and providing prophecies and warnings to those who consult it. The Púca has the power of human speech, and has been said to call those it feels have slighted or offended it out of their homes for a ride. If they fail to appear, it will tear down fences, scatter livestock, and create general mayhem. From popular culture Puck, the goat-footed satyr made famous in Shakespeare’s “A Midsummer Night’s Dream” draws from the mythology.
___ From Monstropedia, the Monstrous Encyclopedia.

I had never really been around sick and dying people before but for some reason, I think I figured out, or sensed, that was what was happening to Don Wallace.
As I delivered the Durango Herald each day, he waited out there on the porch for the latest on Patty Hearst and smoked roll-your-own cigarettes. His moods varied wildly and he had that far-away look in his eyes.
Some days it would be a surly nod and a distant stare. Other times, obviously happy to engage anyone in conversation, he’d attempt a lame joke or tell me something that he heard on the radio and ask if I had anything about that in the paper. At times, some of his cronies would be there as well.
Ed Gould, a former newspaper man himself, occasionally would drop by with groceries, goats milk, tobacco, or perhaps a bottle of Black Velvet. Gould would disagree with almost anything Don said. It seemed purely by habit.
Don, who knew I lived across the street from his brother Walt Wallace, occasionally would ask me about stories I had heard from Walt, and not refute them but embellish or add details that cast him personally in a favorable light. It seemed almost competitive, the storytelling gene among the Wallace boys.
“In September 1975, a year and a half after her life had been so brutally altered, Patty Hearst was found in an apartment with two other SLA members and arrested by the FBI. They charged her with bank robbery. Her family hired the famous attorney F. Lee Bailey to defend her in court,” according to Katherine Ramsland in article about the controversial trial.
Bailey, who had defended Sam Sheppard and arranged a deal for Albert DeSalvo (the Boston Strangler), accepted the case with the requirement that he be granted book rights.
Don, and his visitors, often had a field day with the circus that the story had become.
I struggled with the weirdness of it.
How could a young woman from a rich and powerful family change so starkly in to bank-robbing terrorist Tania. The newspaper photographs were fascinating.
But the whole world was a little weird back in the mid-1970s.
It felt like we had somehow offended a force for order in our universe, and it was calling us out.
We had no choice in the matter either, if we didn’t go, it would tear down our fences, scatter our livestock and generally create mayhem.
Whether we wanted to, or not, we were all going for a ride.
###


• Tales of the future, straight from the horse's mouth.

• Smooth and comfortable on the right side of gate.

• Humor, sadness and the angry bear in a trap.
Posted by ___ Restless Native at 9:50 PM No comments:

It is like 'Jurassic Park' in the bathroom there 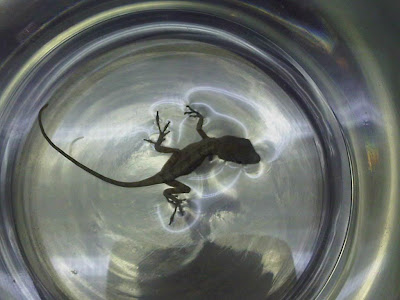 What is it? It is moving. Are those claws? That, for sure, is a tail.

It started out like one of those B-grade movies you love when you are about 12 years old. Picture a wide shot with a woman preparing to fill up a glass bowl in the sink of an old building. Everything is normal, calm, and tranquil. The old building has been there in downtown Denver for at least 100 years and the plumbing probably saw its last update about 1920. Then the shot zooms in tighter, focusing more on the glass rose bowl and the sink as the water is turned on, and tighter yet, to the tap, as the water begins to fill and then, something small and unrecognizable plops in the bowl. She notices and holds it up to the light to better see.
What is it? It is moving. Are those claws? That, for sure, is a tail.
Yikes! I think it is a baby alligator.
Immediately that opens up the realm of possibilities in my over-active imagination. How did that get in the tapwater. I’ve heard of ‘gators in the sewers before, but is it warm enough in Denver for them to survive? And that was from the tap — hopefully tap and sewer shouldn’t have any connection. And it’s cold, almost Thanksgiving.
According to this month's Colorado Editor, "Clyde, a lizard who mysteriously appeared in running water from a tap in the Colorado Press Association bathroom, has garnered media attention from the Denver Post and National Public Radio to Channel 7 and Channel 9 News. The lizard, which is approximately 1-1/2 inches in length, is thought to have crawled into the tap rather than being a product of the Denver water system. He now resides at Scales and Tails in Lakewood where they hope to determine his exact identity."
Samantha Johnston, Colorado Press Association's executive director (and my boss), found the little bugger when she was filling up the glass bowl upon returning from a recent trip to Mexico.
I think it gives new meaning to the oft-used admonishment for travelers to, "Whatever you do, don't drink the water."
###
Posted by ___ Restless Native at 8:11 PM No comments: 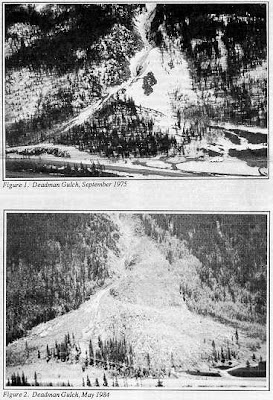 Clinging to the wreck of a guitar

which he had been playing