Cheaper to use the horses? 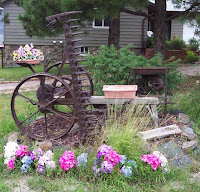 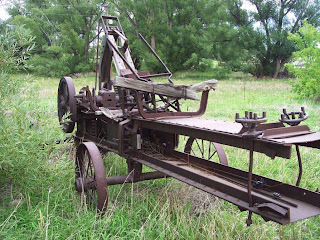 Today there is a substantial movement back to horsepower

By Rob Carrigan, robcarrigan1@gmail.com
On the ranch, my father said it was sometimes easier and cheaper to use the horses than to get the tractor going, especially for mowing hay. Today, with gasoline headed higher once again, maybe we are getting closer to a time when a bag of oats makes as much fuel sense as feeding the John Deere.
If a person drives around the Tri-Lakes area, there is plenty of horse-drawn equipment now serving as lawn ornaments that once plowed, raked, bailed, cultivated, threshed and dug potatoes.
Wouldn’t it be interesting to know a few of those antique implements’ story? Perhaps there are a few of you out there that know those stories?
Perry E. Gresham tells of a close call while raking hay in “The Divide Country” near Elbert in his book “Growing up in the Ranchland.”
“Ranching and farming in those early days was much more rugged than it is today. The technological revolution has influenced the rural way of life. We did many things that are mechanized today.”
By way of example, Gresham talks of the potential danger. “We had mowing machines drawn by horses. The sickle needed sharpening from time to time, which was accomplished by stone wheel or a hand tool. After the hay was cut, we allowed it to dry for a day or two before we moved in with a horse drawn hay rake. When we worked frisky horses, these were dangerous occupations. I had a team run away when I was raking hay. The bumpy ride knocked me off my seat and down to where the tines were about to roll me over and over. I held on to the reins with the grit of a strong young country boy, and by the grace of God, the horses came to a standstill. I was fortunate enough to avoid an accident with the rake.”
The first half of the 19th Century was an age of discovery for farm implementation. Men like Jerome Case, Cyrus McCormick and John Deere successfully developed huge manufacturing facilities that began producing equipment that made the farming job that much easier than the old “scatch” endeavors up until then, writes Sam Moore in the “History of Horse-Powered Farming in America.”
“By 1900 sophisticated farm machines became available that embodied the principles of many of today’s modern implements. They performed nearly all the tillage, cultivation, or harvesting operations on progressive farms of the day. In some areas steam traction engines were being used for threshing or plowing, but they were too large, heavy and expensive for most farmers. The new implements were virtually all animal-powered. Even after the introduction of gas tractors, automobiles, and trucks during the first decade of the 20th century, the horse and mule population in the United States continued to grow until it reached the all-time high of 26.4 million animals in 1918,” writes Moore.
But for the next two decades, a real push to the gasoline tractors by agriculture colleges, extension agents, and equipment salesmen took its toll and by 1950, hardly anyone was still using draft animals.
Today there is a substantial movement back to horsepower in some organic farming circles as modern-day draft farmers claim farming with horses does less damage to land than gas-powered heavy machinery and reduces reliance on fossil fuels.
But before we get all fired up to switch to back draft-horse farming is this area, we need to consider some other factors.
The historic record indicates that it was a bit cooler and wetter back in the days of horses and hand implements in these parts. Rogers Davis, long-time director of the Lucretia Vaile Museum notes that you couldn’t hope to grow three-pound potatoes and get 383 wagonloads full with dry-land tactics in the modern age. All we need is a little water, and cool weather to go with our horsepower.
###
Posted by ___ Restless Native at 7:32 PM