Used to pack artillery and other supplies up Ute Pass from Fort Carson to Camp Hale, the army’s mules initially arrived at the Colorado military installations in 1942. In December of 1956, the U.S. Army deactivated the final two mule units at a ceremony at Fort Carson. Honored and present at that ceremony were the service’s two most famous mules — Hambone and Trotter.
“The presentation of this certificate on the occasion of the deactivation of the Army mules is accompanied by the firm hope that your retirement will not be plagued with those horrors which, in times past, have caused you to unburden yourself rather hurriedly of riders and other equipment — a glimpse of either of those hideous devices, the umbrella or the bicycle,” noted Major General Harry P. Storke as he presented Trotter his citation for outstanding service.
Trotter later became the mascot for West Point, a position he held from 1957 to 1972.
Hamilton T. Bone, on the other hand, had already made a name for himself as jumper by besting thoroughbred horses at local, state and national jumping events. He hit the big time in 1949 finally, when a Life magazine article and photo spread about his exploits appeared following his banishment from participating in the Camp Carson Hunt Club jumper classic— after winning the event the previous year.
“Hamilton T. Bone — Hambone for short — had been foaled in May 1932 on a farm in Missouri,” writes Gayle C. Shirley in Four Legged Legends of Colorado. “Like every mule, he had a perfectly respectable mare for a mother. But his father — let’s face it — was a jackass.”
According to Shirley, “An oldtimer was once quoted as saying he remembers the mule ‘driving his handlers nutty.’ He said it ‘took pound of spit and sweat and a ton of cussing to turn him into a first-rate mule.’”
Hambone was known for his silvery white coat and other crowd-pleasing actions during his military career and later in front of audiences at rodeos and equestrian shows.
The Denver Post says Hambone served two combat missions overseas during World War II and also made three movies in Hollywood.
The Fourth Forward Support Battalion records him as being born in Tennessee, however, and lists the following locations for his service, Oklahoma, Fort Riley, Kansas and Fort Carson.
“After his retirement from the army in 1956, he was purchased by the Pikes Peak or Bust Rodeo and was used as a rodeo headliner. He also made many trips on the annual 100-mile Pikes Peak Range Ride through the Rockies. When not busy he lived in semi-retirement on the Jasper D. Ackerman Turkey Track Ranch,” according to the Battalion web site.
“He made one visit back to Fort Carson in 1967 when his long-time keeper, MSGT ‘Pop’ Cnossen died. Hambone took part in the funeral parade,” according to the battalion’s site.
In 1970, a few months before Hambone himself passed, he was returned to the Fort Carson to live out his last days at the post. He died March 29, 1971 at the age of 39. He was buried with appropriate military ceremonies in front of the Division Artillery Headquarters.
The mule barns at Fort Carson were destroyed in 1970 and regardless of attempts made to reintroduce mules to the military in the 1980s, the Army has made little use of the animals since 1956. 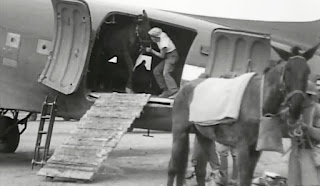 I ran the base body shop at Svc battery 1/19 motor Poole. I restored and painted what I was told was a junk jeep from WW2 'Charley 5' for Vice President Spiro Agnew to ride in for the Parade honoring Hambone.

Well known to those living in barracks within about a mile from Hambones house. There were 2 groups of GIs who on Friday or Saturday nights would one treat Hammie to some LSD. while the other gave him booze on another night. Never on the same night.

Ole Hambone could be heard HEEE HAWWWWWing and kicking his fence and house down then running down the street kicking cars and base busses. That went on awhile until one fateful night when they accidentally gave him drugs and booze! Hammie broke loose and chased a bus kicking the hell outta it. He let out one final HEEEEEEEE HAWWWWWWW as he kicked the bus one last time, fell over and died. I was not there to see it but could hear it at my barracks.

Pretty much everyone except necessary personnel were given off for the funeral but not many went except for officers and high ranking enlisted men, plus a large group of politicians . That's the actual real last day of Hambones life and the real cause of his death .

He loved kicking those busses. Don't know why he thought they were the enemy only that I saw him chasing busses a few times including one time when I was on a bus he broke out of his house to go after. I gotta tell you he was like a 100th degree NINJA blackbelt the way he kept those kicks hitting that bus!