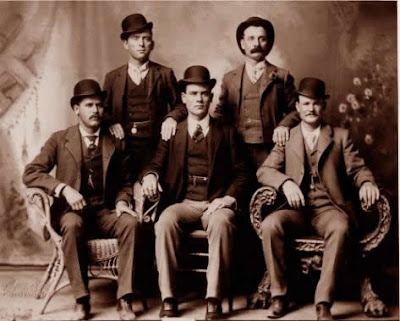 Sutton's Law is related to legendary 1930s outlaw Willie Sutton's often quoted (and probably falsely attributed) response to a reporter who asked why he robbed banks.
"Because that's where the money is."
I have often wondered why that law didn't seem to apply for the "Wild Bunch" and the Cripple Creek District.
As a kid growing up in southwestern Colorado, nearly every wide spot in the road down there claimed some connection to the heralded outlaws. With the gang holding up the San Miguel Valley Bank in Telluride, robbing the train at Stoner, holing up at Dunton Hot Springs, and several associated robberies in the Grand Junction, Delta and Vernal, Utah, areas, in addition to Harry "Sundance" Longabaugh's stint working on his uncle's ranch near Cortez as just some of the historically possible links - the stories were difficult to dispute.
Then there is the haunting photograph of the five dapperly dressed fellows at the turn of the century, three seated, two standing behind. From left to right: Harry A. Longabaugh, a.k.a. "The Sundance Kid," William Carver, Ben Kilpatrick, a.k.a. "The Tall Texan", Harvey Logan, a.k.a. "Kid Curry" and Robert Leroy Parker, a.k.a. "Butch Cassidy." The photo was taken Nov. 21, 1900, at John Swartz's studio in Fort Worth, Texas, near the Hell's Half Acre section of town the gang was known to frequent, and probably has appeared on more "wanted" posters than any photo in the last century.
But the outfit is given credit for robbing trains, mines, banks and other businesses all over the West - Colorado, Wyoming, New Mexico, Utah, Montana, South Dakota, Arizona, Texas, Nevada and Oregon. And their height of operation corresponds perfectly with the Cripple Creek District's heyday. Why didn't the "Wild Bunch" knock over any easy targets in the wild district?
It was where the money was.
Maybe the answer was Love.
According to the information submitted to the Colorado Archives by the Pikes Peak Genealogical Society and posted by USGenWeb, "Love was the last community to officially debut in the Cripple Creek District, acquiring a post office in 1894."
Research by Jan MacKell at first indicated, that village located at the far east end of the district was made up of ranchers, a few miners, sawmill workers and maybe dairy workers. But, notes the archive project, "Love was remote enough, however, that members of outlaw Butch Cassidy's notorious Wild Bunch also felt secure in procuring a hideout there shortly after the community was founded."
Not only is that possible, I would guess, with the amount of money flowing around these parts at that time, it would be silly for an outlaw not to locate nearby.
But Parker, Longabaugh, Logan and the others, for whom history has had a devil of a time keeping track of anyway, likely were among the neighbors next door. But we may never know because Butch might have been going by George Cassidy, Tom Gillis, James Ryan, Santiago Ryan, Santiago Maxwell, J.P. Maxwell, James Lowe, Santiago Lowe, George Ingerfield. And Sundance maybe he took up the name Harry Alonzo, Harry Place, Enrique Brown, H.A. Brown, Frank Smith, J.E. Ebaugh, J.E. Thibadoe, Frank Jones, Frank Bozeman, Harry Brown or Frank Boyd.
###
Posted by ___ Restless Native at 8:04 PM