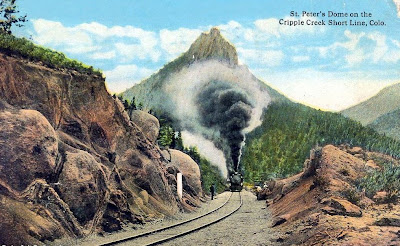 While playing a friendly game of Monopoly recently, someone tried telling me that the board position of the Short Line Railroad and the “Shortline to Cripple Creek,” were one and the same. I didn’t argue with them but decided to investigate. Following is the result of that investigation.
According to Tivis E. Wilkins in his 1983 book “Short Line To Cripple Creek: The Story of the Colorado Springs & Cripple Creek District Railway,” the standard gauge railroad made its way into the near-exclusive narrow-gauge domain of Colorado’s Rocky Mountains.
“The Short Line utilized proven engineering methods to cut an impressive route to Cripple Creek. So impressive that, when then Vice-President Theodore Roosevelt traversed the route in 1901, he is credited with saying that it was a ‘trip that bankrupts the English Language.’ When the track was removed and the route was converted to the Corley Mountain Highway, an early tourism endeavor that survives today as the famous Gold Camp Road,” says Wilkins’ book.
The game of Monopoly, on the other hand, was invented by a salesman by the name of Charles Darrow, according to “The Authorized Version,” by Maxine Brady, from “The Monopoly Book, Strategy and Tactics,” published by Parker Brothers in 1975.
Darrow was selling heating and engineering equipment before the stock market crash of 1929 but spent most of the early 1930s looking for a job. Darrow took whatever odd jobs he could in order to feed his two young children, his wife and himself.
“To fill his idle hours, and help him forget his worries temporarily, Darrow invented things. Some of them were for fun: other was probably devised in the hopes that they would become profitable. He made jigsaw puzzles: he created a combination bat and ball, which was supposed to be used as a beach toy; he designed an improved pad for recording and scoring bridge games. They were interesting diversions, but no one was willing to pay for them,” wrote Brady.
Darrow constructed the first Monopoly at his kitchen table at his home in Germantown, Pennsylvania one evening in 1930. He sketched out street names from Atlantic City, New Jersey on a round piece of oil clothe that covered the table.
“The streets he chose were all from the same side of the city: between the Inlet and Park Place, along the Boardwalk. ... He included the three railroads that carried the wealthy vacationers to the resort, and the utility companies that service them, as well as the parcels of real estate of varying prices. He wanted a fourth railroad to make his board symmetrical, so he added the Short Line: actually it was a freight-carrying bus company that had a depot in Atlantic City,” Brady writes.
###
Posted by ___ Restless Native at 6:33 AM