Maggie and other ghosts in the building 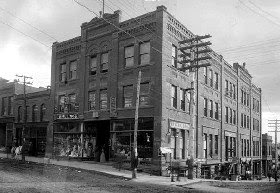 Stories of Maggie have swirled at least since the 1960s

For years, Oscar Lampman took care of the dead in Cripple Creek. And it is a wonder more ghost don't hover around 300 E. Bennett, the one-time base of operation of the basement undertaker.
Legend says it was here, in his funeral parlor, where Pearl DeVere's sister, coming to collect Pearl's body, noted the dyed auburn hair and found out her sister was no dressmaker but, instead, employed as madame at the Old Homestead brothel. The high-minded sister turned tail and caught the first train back East.
"Cripple Creek can bury its own dead," editorialized The Cripple Creek Times then. Indeed, and let he [or she] who is without sin, cast the first stone.
It was here that gold mining magnate Sam Strong's body lay, with much of his hard head blown away from a shotgun blast.
Countless other bodies, their owners whom suffered the violent deaths of violent times, underwent embalming in the lower level of the building.
Also for years, the Manhattan Barber Shop, with eight porcelain tubs for baths, occupied the first floor, and you would think some of the hanger-on, hang-around crowd would hang at such a popular place - even in an afterlife.
But oddly enough, a comforting ghost apparently haunts the premises of the old Fairley Bros. & Lampman Building.
A lilted voice, singing high in the scales and steeped in the accent of the Emerald Isle, a faint wisp of rose-scented perfume, the clackety-clack of old manual typewriter, are offered as evidence of the presence of "Maggie."
Stories of Maggie have swirled at least since the 1960s.
Noted Western artist Charles Frizzell, who ran an art gallery in the building then, and Katherine Hartz, who had the Sarsaparilla Saloon in the building beginning in 1968 and eventually purchased it, both related stories for Chas S. Clifton's 1983 book, "Ghost Tales of Cripple Creek."
"That was during the good old hippie days and a lot of people coming through town would be looking for a place to 'crash' for the night," Frizzell is quoted in Clifton's book.
But when the Frizzell's allowed visitors to stay in unused portions of the upper two floors, ghostly commotion centered in what used to be a ballroom on the third floor usually quickly drove away "crashers" before a second night.
"At times, Frizzell says, mysterious blue lights danced down to the second floor, the living quarters. He and his wife tried to stop them by shutting the twin doors on the staircase, but someone else seemed to want that door open," wrote Clifton.
He quotes Frizzell: "We would tie them shut with a twisted coat hanger because we could not lock them. We could go downstairs in the gallery and know there was no one upstairs, but we'd come back and find the hangers untied and the doors open."
Hartz had an even more finite visit from Maggie.
Also from Clifton's book quoting Katherine Hartz: "I was walking down the hall on the second floor. As I walked I heard sounds like someone was upstairs with high heels on, walking above me. I realized that in order to do so, whoever it was had to be walking through the walls upstairs."
According to the account, when she investigated, she encountered a woman in her late 20s or early 30s, tall, good-looking brunette, with her hair in a "Gibson Girl" roll, wearing a white shirtwaist, ankle-length dark brown print skirt and high-heeled boots.
Later, in the 1970s, having trouble with small unexpected electric bills and reports form police and nearby shop owners of late night lighting of the upstairs rooms, the
Hartz expected to find evidence of squatters but found instead, the building locked and undisturbed with electricity turned off at the fuse box.
But even after the advent of gaming and the building's conversion to Colorado Grande Casino, the sightings have continued.
"Some have reported that singing and dancing is sometimes heard emanating from the old ballroom, as well as the sounds of Maggie's lilting soprano voice heard singing an Irish accented concertina," reports "Legends of America Newsletter" owner and editor Kathy Weiser.
"At the casino, security guards have often reported seeing
Maggie along with a gentleman friend playing the slot machines after hours. She has also been caught on tape by the security cameras. However, after being viewed and stowed away, the tapes mysteriously vanished," reports Weiser.
Today, a café named in honor of Maggie resides in the building along with the casino.
Over the many years, tenants in the building in addition to those previously mentioned - included The Central Drug
Store on the northwest corner of the first floor. The upstairs on the second floor was occupied mostly by professionals with five attorneys and four doctors leasing space in 1902 and 1903.
"On the third floor, B.P.O.E. 316 - a very influential organization in the city - had their meeting hall [the location of the ballroom]. The Elks were pleased to lease this space, but they were looking for a permanent home.
They found this in 1911 when the Elks purchased The Gold Mining Exchange Building," according to "Cripple Creek: City of Influence," a 1994 book by Brian Levine.
Perhaps Maggie, and other ghostly friends never noticed the party had relocated.
###
Posted by ___ Restless Native at 1:54 PM

Katherine Hartz was my Great Aunt. I and my family live on the second floor. I was 7 at the time. So it would have been in 1977. I had several encounters with Maggie. I love it and would very much like to go back and visit her.

Got the privilege to investigate that building a few times, the spirits there are always willing to talk, and interact. Maggie and her friends were a delight.