Real estate people will always tell you it is location, location and location. And they are right, to a degree. But when speculating, luck also seems to play a strong hand as well.
Consider the communities of Jones Park, Lake Moraine and Seven Lakes.
“It was rather difficult to climb to the summit of Pikes Peak until the observatory of the U.S. Army Signal Service was established there 1873 and a trail built up the southeast slope of Pikes Peak,” notes Ivan W. Brunk in his 1989 book “Shattered Dreams on Pikes Peak.”
“It was a long journey, but hotels at Lake Moraine and Seven Lakes enabled travelers to make the adventure a less arduous two-day trip to the peak,” writes Brunk.
“However, these hotels survived only a few years because of the opening of a much shorter route to the summit in 1880. The settlement at Jones Park lasted for a number of years, and there were many plans for rather grandiose developments, including railroads, resorts and a dam. But for one reason or another, none of these projects materialized.”
Partly because travel, to them, was primarily by burro or horseback, and partly because most things had to be hauled in by those means because very little agricultural produce was possible at that altitude, the populations remained small.
In 1890, the city of Colorado Springs purchased 784 acres in the Bear Creek drainage, including Lake Moraine, to improve the city’s water supply. Shortly afterward the city enlarged the natural dam there.
In the Seven Lakes area prior to 1902, various major players in the area’s history vied for the water rights, (and then the property itself) until the city was ready to complete its storage project there. Among those involved in such acquisitions were historic figures like Irving Hobart, The Woods Investment Co., and Dr. Mayo G. Smith.
By the authority of an act of Congress on May 1, 1902, the city was authorized to purchase 7,000 acres from the U.S. government for $1.25 per acre. Shortly after, they began a storage project that the city staff completed in 1905.
During that effort, the city’s contractors took 17 feet of water out the first lake and the bottom could not be found. At that time, the chairman of the water committee, a man by the name of St. John, said: “When the dam is built, the lakes of apparently no bottom will be covered by a large body of water, and one of the prettiest to be found in the state.”
A tunnel 2,330 long through the divide of Seven Lakes transports water to Lake Moraine and is called the St. John tunnel.
In 1948, Colorado Springs bought some of the land that had included Jones Park and then purchased the remainder in 1952.
Lake Moraine and the Seven Lakes area, and to a lesser extent Jones Park, continue to provide water for Colorado Springs though the area is not open to the public, being a primary drinking water source for the city.
The city recently began allowing access to the South Slope on a limited basis. No access to the area will be allowed without pre-registering, permits are not available on-site. There are a limited number of vehicles and users allowed each day to this secluded, high altitude recreation area.
Location and luck certainly has had a lot to do with development (or lack of) for these communities. But maybe it was something in the water. 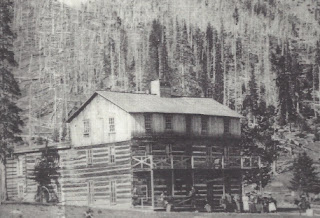 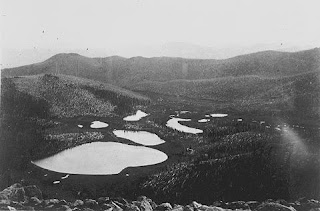