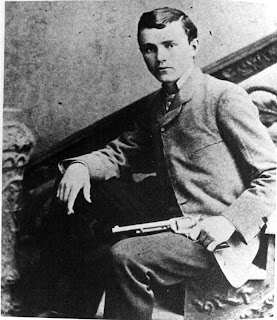 Let him have it with both barrels

I guess it is a fact that those that live by the sword, die by the sword. The same apparently holds true for those that live by the six-shooter and other firearms. Bob Ford lived that kind of life.
Mostly recognized as the killer of Jesse James, Ford met his own end and both barrels of a shotgun blast in a saloon he owned in Creede, Colo., on June 5, 1892.
Ten years earlier, Bob and Charlie Ford, who had become new members in the waning days of the James gang, had just finished breakfast in Jesse’s home in St. Joseph, Mo., where he was living under the assumed name of Tom Howard.
“On a warm spring day, Jesse opened the front door of his home to air it out. He thought it best to remove the revolvers lest the neighbors become suspicious. He stepped up on a chair to dust off a picture. This was the kind of opportunity the Ford brothers had been waiting for. They drew their revolvers and as Jesse turned his head, Bob fired the Smith & Wesson .44 caliber revolver directly at Jesse, killing him instantly. Ironically the revolver had been given to him by Jesse,” wrote Ken Jessen in the 1986 book Colorado Gunsmoke.
A popular song of the day noted many folk's opinion of the deed.
“Oh! The dirty little coward
who shot Mister Howard
And laid Jesse in his grave.”
The Fords tried to collect the $10,000 reward money for Jesse James ‘dead or alive’ but instead were charged with murder. They were convicted, sentenced to hang, but granted a full pardon by the Governor of Missouri, Thomas Crittenden.
Charlie Ford committed suicide two years later and Bob Ford wandered aimlessly, drinking and posing for photographs in the dime museums of the west, first in New Mexico and then in Colorado.
He spent considerable time in the saloons and gaming establishments in Pueblo, owned and operated a saloon and gambling house in Walsenberg, and then moved on to Creede when the boom began there.
Ford and his wife Dot purchased a lot on Main Street and built and ran the Creede Exchange, a combination dance hall and gambling joint. But sale of school land next to the exchange forced its closure. Shortly afterward, he became enraged about losing a great deal of money betting on a prizefight. So, fortified with liquid muscle and courage, Ford and Soapy Smith gang member Joe Palmer proceeded to shoot out many of the streetlights and windows along Main Street. The citizens were not impressed and Ford was forced to relocate to Colorado Springs. But after an apology in the local Creede paper, Ford was allowed to return. He once again began a dance hall and gambling house but it burned down with much of the rest of the business district in Creede.
Undaunted, he put up a tent and continued doing business. Three days after the fire, Edward O. Kelly, an acquaintance of Bob from his days in Pueblo, Colorado Springs and perhaps elsewhere, entered the tent and after being passed a loaded shotgun from a rider on a horse in the street, said “Hello Bob” or “Oh Bob,’ and let him have it with both barrels. Kelly, also from Missouri, was married to a relative of the Younger brothers and his wife knew the James family. Kelly, who was also the former marshal of nearby Bachelor City and a deputy of Hinsdale County, was tried, convicted and sent to Canon City to the state penitentiary. He was pardoned in 1902 and then killed by an Oklahoma City law officer two years later.
###
Posted by ___ Restless Native at 7:31 AM