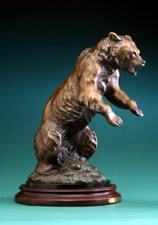 Nothing is more dangerous than a holdover from times past. Refusing to change, such a relic is bound and determined to do things the way they always have, according to his or her own rules and will not go peacefully into the here and now. Which brings our story to the noble life and violent times of Old Mose, ‘King of the Colorado Grizzly Bears.’
In the area surrounding Black Mountain, west of Guffey in Park County, the 1,130-pound ‘Mose,’ the last known grizzly bear recorded in the South Park area, preyed on so many cattle that ranchers set and left standing a $500 reward for his hide for over 35 years. The bear, with its signature missing toes on its back paws, was credited with killing at least three men and over 800 cattle.
In 1884, Jake Radcliff and two other hunters by the surnames of Seymour and Cory went hunting for deadly bruin, but Radcliff finished the hunt on the wrong end a bear claw. His companions were able to get him back to a ranch house and call for a doctor. But when the Doc tried to transport Radcliff’s mauled body to Fairplay, he expired enroute. Two other cowboys and ‘would be hunters’ trying to collect the reward also became the ‘hunted’ according to legends of the day.
“In 1904 a bear hunter from Idaho came after the famous Mose,” notes Virginia McConnell Simmons in the 1966 book “Bayou Salado: The Story of South Park.”
“Together with a local rancher and their hunting dogs, they finally brought Old Mose to bay after two months. It took six shots then to kill him. When the carcass was cut up, it was discovered that nearly one hundred bullets had found their mark in the old rogue’s body,” wrote Simmons.
Jack Bell, recounted the story of the great bear’s death in a famous piece for “Outdoor Life” in 1904.
“He died befitting his rank and lay down in his last sleep with imposing grandeur. Just think, after being shot through and through times without number, baited with every device and cunning known to trapper; chased by demon posses of cowboys an ranchers bent on his extermination, and in all this he has met them with superior generalship, cunning unexcelled, knowledge supreme.”
The four dogs used by professional bear hunter J.W. Anthony (who had killed at least 40 bears prior to tackling the Old Mose case) were apparently an oddity and object of curiosity to the bear that had eluded hunters and trappers for nearly four decades.
“His taking away is due solely to the years of training of a pack of incomparable bear dogs, who know their quarry, his habits, mode of attack, retreat, as well as this animal itself. He was handicapped by this band of intelligent trainers and knew not their circling, pinching, running away tactics. All this was new to the old monarch — the talk of the dogs brought him to a standstill with wonder and amazement. He did not even strike at them, but sat and seemed to ponder and try to unravel and untried quality that he never before been called upon to meet. So he sat and looked and looked, without a growl or even a passing of the murderous paws,” according to Bell’s magazine account.
As the dogs preoccupied the bear, Anthony shot him with a .30-40 carbine — at least six times, in the jowl, the left shoulder, the face, through the shoulder, and the shoulder again, and perhaps again.
Anthony was then forced to reload.
“Looking steadfastly at the man refilling the magazine of his rifle for a few seconds, he at last made up his mind that it would be policy to first kill him and then pursue his uninterrupted analysis of these strange dogs that had the courage to snap at him and tear bunches of fur from his incomparable coat. Slowly he started toward the hunter, never leaving the awkward slow walk of his species. His eyes burned as with fire, and his coming was terrorizing to any but the seasoned bear killer. When at about sixty-two feet away he lowered his head with an unsounded challenge, and as his head was bending low, the hunter drew a bead at the point between the ears, and taking a long breath, gently began pressing the trigger. Slowly as the mountain pine begins to fall under the woodman’s axe, Old Mose, the terror of all, man and beast alike, began to settle down. Slowly, slowly and with neither sound nor quiver, the massive king gave up his life as he had lived it, in blood and violence. He met his death with honor, willing to the last to measure his great strength and cunning in mortal combat with that of the hunter, who dared to stand before him and dispute his reign,” Jack Bell wrote.
And so ends our story. Last year, after several years of fundraising by the Adams State College Alumni Association and ASC Grizzly Club, the Grizzly Courtyard project was completed in Alamosa. The crowning glory of the project is a 12-foot bronze statue of Old Mose, the most dreaded grizzly bear in the entire United States.