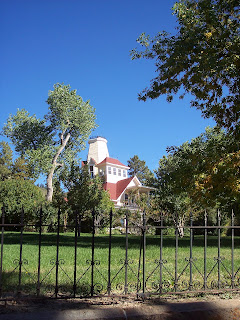 By late summer of 1890, financial burden of the Rocklands and other ventures compelled Thompson to leave town

It has been said that nature -- with all its overwhelming power -- knows what we need and the doctors know nothing.
Almost from its very beginning, Palmer Lake, a town initially tied to the very idea of being a health destination, has tested that theory.
“Dr. W. Finley Thompson assumed such a prominent leadership role in Palmer Lake during the 1880s that everyone has regarded him as the founder of the town,” writes Daniel W. Edwards in his new book “Dr. William Finley Thompson: Dental Surgeon and Founder of Palmer Lake” that was published in July. Thompson was the town’s first mayor and built area landmark Estamere House (Estemere).
Dr. Thompson himself, in a promotional piece published in the summer of 1884, laid it out pretty clearly.
“The healthfulness for the locality of Palmer Lake is fully recognized by all, and the prominent members of the medical faculty have frequently urged the establishment of a summer and health resort at this point...”
Thompson saw the area being developed in the same manner as European sanitariums in the Alps created for ‘lungers,’ a term often used to describe those suffering from tuberculosis and asthma.
“It is now conclusively proved that dry and rarified atmosphere is wonderfully curative, even in cases of tubercular disease. Colorado is full of people who came here in actually dying condition, who now are enjoying even robust health. Asthmatics are especially benefited in this altitude, and sufferers from this most distressing of all maladies have received permanent relief by residence here … The climate of Palmer Lake (Divide) presents without question, advantages of very superior character…” according Thompson in the promotional flyer.
Marion Savage Sabin, in her1957 book, “Palmer Lake: A Historic Narrative,” makes a similar observation about Thompson’s intentions.
“Here was the very place for a health resort and vacation community of luxurious type and not to be out-done by famous spas he ad visited in Europe. Here in ideal combination were scenic beauty, pure bracing mountain air and warm sunshine, icy springs rich in mineral content, healing pine forests, the seclusion – and at the same time accessibility by rail – which should assure the success of such an undertaking.”
Daniel Edwards notes that, “By May of 1888, he (Dr. Thompson) was actively engaged in making this happen – building a 70-room hotel with attached sanitarium – his last vigorous attempt to develop Palmer Lake.”
Edwards writes that two prominent physicians, experts in the treatment of lung problems, played important roles in that development. Dr. Alfred Tucker-Wise, the medical director for the Swiss Hotel Kursaal in Maloja, and Dr. Charles Denison, professor of diseases of the chest and of climatology at the University of Denver, consulted with Thompson regarding the construction and early operation of hotel.
Thompson also brought in his friend, Thomas Gaddes, a dentist associated with Thompson from his time in London, to become the medical superintendent of the sanitarium at the Rocklands.
Interestingly enough, Gaddes became the first elected Town Physician for Palmer Lake in March 1889, the same year he also obtained his M.D. from the Denver College of Medicine. Later in life, he also received patents for a number of inventions produced in England -- among them a wave mill which generated electricity from ocean waves, an automatic egg boiler, a window sash fastener, and a strainer that worked with a tea or coffee pot.
The dentist/physician combination was fairly common at that time, and in fact, Dr. Thompson, M.D., received his license to practice medicine on April 1, 1890, from the Colorado State Board of Medical Examiners.
“Finley’s hopes for a sanitarium at Palmer Lake were dashed by several factors,” writes Daniel Edwards. “First, not enough money was raised to implement his plan for a main sanitarium building with detached cottage and grounds. Then, Dr. Charles Denison apparently abandoned his support for Finley’s project.”
Two new sanitariums in Colorado Springs (Bellevue and Albert Glockner) apparently didn’t help matters either.
By late summer of 1890, the financial burden of the Rocklands and other ventures compelled Thompson to leave town, basically skipping out owing a lot of people a lot of money. The hotel was never wildly successful and was eventually destroyed by fire in 1920.
Thompson’s personal residence, Estamere, lives on of course, and is considered the ‘crown jewel’ of Palmer Lake, as does the town plat recorded in November of 1883, by Dr. Thompson and Dr. William A. Bell.
Bell was a Manitou Springs physician, director and financial recruiter for Denver & Rio Grande Railroad, and developer of Briarhurst Manor, his personal residence.
His Monument Farms organization began buying property in the Palmer Lake area as early as 1870 and had amassed nearly 3,000 acres by the time Thompson showed on the scene. Bell, and his organization, actually realized a healthy profit from land sales in the area.
Just what the doctor ordered. Perhaps there is a distinction between what various doctors know, and don’t know?
###
Posted by ___ Restless Native at 3:28 PM