Treehuggers, if only given a chance 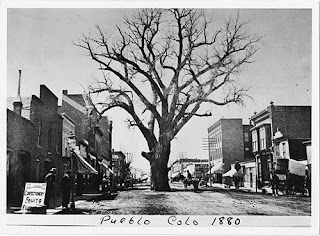 Not a tree or shrub is to be seen, except on the creeks

Early travelers to Colorado may have been avid treehuggers -- if given half a chance. Today cottonwood groves along area streambeds are a pretty common sight but it wasn’t always the case. The rare occurrence as settlers made their way across the vast prairie was truly a sight for sore eyes and became landmarks on the trail. Big Timbers, on the Arkansas, for example, became a haven for Indian camps and later the site for Bent’s Fort.
“Prairie grass fires killed seedlings, and enormous herds of buffalo trampled and grazed whatever escaped the fires. The water flow in the rivers varied from high spring runoffs after snowmelt in the mountains to periods in late summer when even the Platte River was completely dry. Not only was the drought a severe trial for the trees, the spring runoffs were so powerful that the river bottoms were scoured out, washing away the sand, bars and banks and any young trees growing there,” writes Stuart K. Weir, in his research of the Lewis and Clark expedition.
One early visitor, George Ruxton, noted the lack of foliage on the Arkansas, east of Bent’s Fort.
“Nothing meets the eye but the vast undulating expanse of arid waste; for the buffalo grass, although excellent in quality, never grows higher than two or three inches, and is seldom green in color; being thinly planted, the prairie never looks green and turf-like. Not a tree or shrub is to be seen, except on the creeks, where a narrow stamp of unpicturesque cottonwood occasionally relieves the eye with its verdant foliage,” wrote Ruxton.
When the trees were found and became landmarks, all sorts of history became attached.
One such landmark in Pueblo was known as “The Old Monarch,” and was 380 years old when it was cut down in 1883, according to “Colorado: Visions of an American Landscape,” a 1991 photo book by Kenneth Helphand and Ellen Manchester. 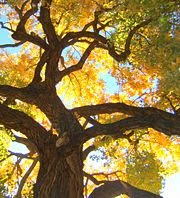 “In 1850 there were 36 persons massacred near this tree by Indians. Fourteen men have been hung from one of its limbs. The first white woman who died in Colorado was buried under its branches,” read text from the back of a historic photo of the tree uncovered by Helphand and Manchester.
Early settlers of Denver and Boulder transplanted cottonwood trees as a domesticating act in order to fight the wildness of their new surroundings.
But General Palmer, in founding of Colorado Springs, took such plantings to a new level.
Palmer had 600 cottonwood trees planted when water was available from city reservoirs in 1872. Palmer employed large crews to maintain the city’s trees and parks and by 1910 the city had created the Department of Forestry.
The cottonwood legacy in Colorado remains fixed.
As Theodore Roosevelt observed, the trees will probably be a part of the fabric of what is Colorado for long time to come.
“From the upper branches of the cottonwood trees overhead – whose shimmering, tremulous leaves are hardly ever quiet, but if the wind stirs at all, rustle and quiver and sigh all day long – comes now and then soft melancholy cooing of the morning dove, whose voice always seems far away,” wrote Roosevelt in Ranch Life and the Hunting Trail. 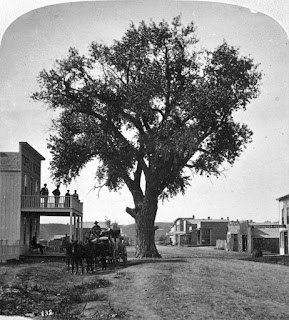 ###
1. Pueblo in 1880 with trademark tree.
2. Local Cottonwood near the Palmer Divide.
3. The Hanging Tree, also known as the Monarch Tree, was a landmark in Pueblo. Standing between present day C and D Street, the old cottonwood had to be removed to accommodate traffic. Photo courtesy of the Denver Public Library, Western History Photographic Collections