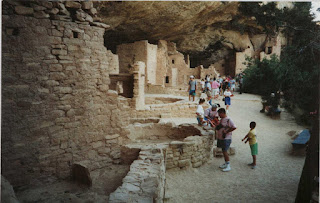 Lucy Peabody, as a result, became known as the “Mother of Mesa Verde National Park.
By Rob Carrigan, robcarrigan1@gmail.com

As a youngster, some of my most vivid memories are surrounded by a pinion- and juniper-tree backdrop and the strange abandoned cities on the green table drained by the Mancos River in southwestern Colorado.

In those days, the entire mummified remains of “Ester,” and various other ancient pueblo inhabitants, still were displayed openly in cases at the museum on the rim above Spruce Tree House in Mesa Verde National Park.

Mesa Verde was established by Congress on June 29, 1906, nearly 10 years before the National Park Service was created.

Virginia Donagh McClurg, of Colorado Springs, was instrumental in the effort to create the park, and her influence also had a profound effect on local history and the tourist industry in this area.

A former correspondent for the New York Graphic, McClurg became interested in preserving the Mesa Verde area from rampant pothunting as early as 1884 when she visited the mesa under a cavalry escort.

A decade later, “she enlisted the support of the Colorado Federation of Women’s Clubs, published articles and poems and wrote letters to people in high places, including Presidents William McKinley and Theodore Roosevelt,” according to “Mesa Verde: The First 100 Years.”

This book was edited by Rose Houk and Faith Marcovecchio with Duane Smith as historical consultant and published by Mesa Verde Museum Association and Fulcrum Publishing.

McClurg also began a lecturing widely (particularly on the Front Range) and even approached the Utes, via Chief Ignacio, in the hopes of leasing the area for her efforts to “let this be the woman’s park.”

McClurg founded the Colorado Cliff Dwelling Association in 1900 and continued to raise money in an effort to preserve the mesa.

“In 1906, with the conservationist Theodore Roosevelt as president, the political climate and public sentiment finally were ripe to achieve The Cliff Dwelling Association’s goals. Unfortunately, at this critical juncture, a large rift opened between the two most influential supporters. Virginia McClurg wanted a state park under control of the women’s group and withdrew her support for a national one at the last hour, while Lucy Peabody maintained her staunch support for a national park.”

Lucy Peabody, as a result, became known as the “Mother of Mesa Verde National Park.”

“When Lucy Peabody won the battle about state vs. federal oversight, Virginia McClurg went home and helped create Manitou Springs,” according to the book.

With stone from various different sites in the southwest corner of the state, a reproduction of a Mesa Verde cliff dwelling was created in Manitou Springs.

From new research, it appears the original ruins, at one time located near my hometown of Dolores, were loaded on rail cars and freighted on to Manitou Springs, where they were reassembled.

But more about that later. The replica opened there at about the same time as the designation of Mesa Verde as a national park.