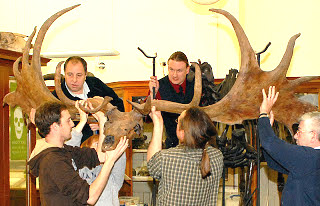 
“The Irish are a fair people: they never speak well of one another.” — Samuel Johnson

“Where there is Irish there’s loving and fighting. And if we stop either, it’s Ireland no more.” — Rudyard Kipling

Like so many things that are labeled Irish, it can be argued whether or not a thing is truly Irish.
Saint Patrick, for example, born in Scotland in about 385 A.D., his father was an Italian official for the Roman government. Story has it that Irish pirates kidnapped him, sold him into slavery, and he later escaped eventually ending up in France where he became a monk. In France, it is said he had a vision suggesting he go back to Ireland to convert the Pagans to Christianity.
The so-called “Pagans” were the Celts and Scandinavians who originally named the island Irlanda and were less pagan than the occupying Romans.
But there are other instances.
“The Irish Elk, Megaloceros, is misnamed, for it is neither exclusively Irish nor is it an elk,” notes the University of California – Berkeley Museum of Paleontology web site and citing S. J. Gould’s 1977 book “The misnamed, mistreated, and misunderstood Irish Elk.”
It is a giant extinct deer, the largest deer species ever, that stood up to seven feet at the shoulders, with antlers spanning up to 12 feet, and ranged all over Europe, Asia and north Africa.
The animal became a lightning rod in evolutionary theory debate in the late 19th and early 20th century as an example of orthogenesis, in which it was postulated that “changes in organisms was due not to natural selection, but to internal directional trends within the linage.”
One more example is necessary — as things Irish should come in threes.
A Claddagh ring is a famous design for rings and door knockers that supposedly traces its origin to the Claddagh village located just outside the old walls of Galway city.
Its pattern shows two hands clasped together around a heart bearing a crown.  The hands symbolize faith, the heart, love, and the crown, loyalty and fidelity.
It is believed that this ring was derived from the Italian “fede ring” (also know as “faith rings”).
There are many different stories related to how the design came about.
Some say the design dates to the story of Dagda, the father of the gods (with power enough to make the very sun stand still).  Dagda is said to represent the right hand of the Claddagh ring.  The left hand represents that of Anu (who later became Danu), the ancestral and universal mother of the Celts.  The mythical Beathauile represents the Crown, and the heart represents the hearts of all of mankind, and the element which gives everlasting music to the Gael.
Another story suggests the king of Claddagh, fell madly in love with a peasant woman but was foiled by her lower status. In his turmoil, the king killed himself and had his hands chopped off and placed around his heart as a symbol of his undying love for the peasant woman.
The supposedly true story is of a Galway slave, Richard Joyce, who was captured by Algerian corsairs and sold to a Moorish goldsmith, who taught him the trade.  In 1689, Joyce was given his freedom and he returned to Galway to set up shop in Claddagh, where he eventually designed the ring, or not. Depending on who tells the story.
What is truth? If you are Irish, that is up for discussion, and perhaps is worth fighting over.
###
Posted by ___ Restless Native at 1:47 PM