One kind of animal in the hole 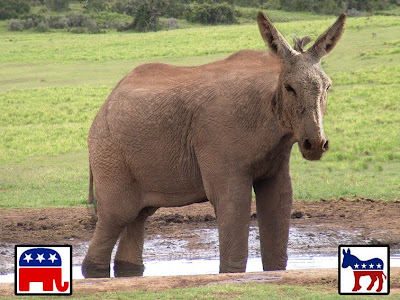 It is my understanding that there is very specific reasons that donkeys, rather than horses were used initially in the mining industry. Among those reasons is the innate reaction of each when its ears brush against something unexpected.
A donkey or burro will duck his head with the unexpected brush-up whereas a horse will rear up on its hind legs. Because you can’t have large animals rearing up on hind legs in a mine, thus the animal of choice became donkey and derivatives. The derivatives came in the form of selective breeding to encourage the size and strength of horse but the useful tendency to duck as evident in donkeys. This is where the hybrid, the mule, appeared on the scene.
In the political process, we have of course, the two dominant parties, Republicans and Democrats, represented by Donkeys and Elephants.
Mark Twain had some interesting things to say about Republicans and Democrats.
“I had been accustomed to vote for Republicans more frequently than for Democrats, but was never a Republican and never a Democrat. In the community, I was regarded as a Republican, but I had never so regarded myself. As early as 1865, or ‘66 I had this curious experience: that whereas up to that time I considered myself a Republican, I was converted to no-party independence by the wisdom of a rabid Republican. This was as man who was afterward a United States Senator, and upon whose character rests no blemish that I know of, except that he was the father of the William R. Hearst of today, and therefore grandfather of Yellow Journalism — that calamity of calamities.”
Which is basically saying Mr. Twain saw benefit in straddling the fence. As I do, to some extent —except when comes down to voting in the primaries of recent experience.
In the primaries, of course, you must make some sort of declaration. Either you are for us or you are against us. Either you are Democrat or a Republican, but in area where you are not likely to get elected dog catcher without the proper party affiliation, some races naturally are decided in the primaries by the dominant party’s electors.
Representative government at its best asks voters to make choices. A political science professor I spoke with recently notes that there isn’t a dimes worth of difference between the two parties anyway. “The Republicans are out-promising the Democrats,” he says. So you might as well operate in the dominant one, because that allows you to make more choices and in effect, be a better voter.
I hope, however, you see where I am going with this. Maybe what we are really creating is a process that breeds candidates that are as strong as an elephant but able to keep their head down and won’t rear up on their hind legs when they travel down a mine tunnel. Such a process is rife with danger. Pretty soon there is only one kind animal in the hole. No room for difference of opinion, no diversity, the politics of compromise, and a bunch of elephant-mules running things. In my opinon, that is not really good for voters who need to make choices.
###
Posted by ___ Restless Native at 1:22 PM