Longhorns on the Goodnight-Loving Trail 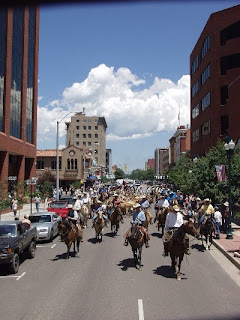 Everyone needs a good trail to follow -- especially one marked by history, romance and tradition.
Monument area rancher Stan Searle knows that.
Perhaps that is why he follows in the footsteps of legendary trailblazer Charles Goodnight and his partner Oliver Loving every year, when he leads the parade for the National Western Stock Show and Rodeo with a herd of his Texas Longhorns driven down Seventeenth Street in Denver.
“The Longhorn cattle drive preceding the parade was initiated last year, as the National Western celebrated its 100th birthday,” according to a release from Searle Ranch in 2007.
“Tens of thousands of spectators crowded the sidewalks from Union Station to Tremont Place, fascinated by the sweeping horns and wide variety of colors, genetic trademarks that go back 500 years. Reminiscent of the first Longhorns trailed into Denver 146 years ago, these cattle are the direct descendants of the Spanish cattle brought to the Americas by Columbus. Now dozens of Colorado ranches raise these historic cattle---which a century ago were nearer extinction than the bison.”
At the end of the Civil War, Goodnight returned to Texas and joined in “making the gather” – a state-wide roundup of free-roaming cattle left to fend for themselves during the four years of war, notes New Perspectives on The West, a project initiated by PBS.org.
“Having recovered his herd, however, Goodnight now faced the problem of bringing it to market somewhere outside the war-ravaged South. He decided to head west, toward New Mexico and Colorado, despite the fact that getting there would mean driving the herd across a waterless stretch of west Texas,” notes PBS – The West.
Larry McMurtry’s chronicles in Lonesome Dove were loosely based on Goodnight and Loving’s celebrated achievements.
Loving, who prospered during the war by selling beef to confederate troops, joined forces with Goodnight in 1866.
“They set out with two thousand head to blaze a trail from Belknap, Texas to Fort Sumner, New Mexico, which became known as the Goodnight-Loving Trail. Once in New Mexico, Loving headed north to Colorado, while Goodnight headed back to Texas for another herd. Between them, they had made more than $12,000,” according to PBS – The West.
“Loving’s part in this financial success did not last long; he died fighting off a band of Comanches who attacked him on the trail to New Mexico in 1867. Honoring his partners’s dying request, Goodnight turned back from that cattle drive to bring Loving’s body back to Texas. Over the following years, however, as the Goodnight-Loving Trail became one of the most heavily traveled in the Southwest, Goodnight extended his activities, blazing the Goodnight Trail from Alamogordo Creek, New Mexico, to Granada, Colorado.”
Information from the Searles Ranch notes that the cattle eventually ended up in Denver.
“Passing just east of the present site of Colorado Springs and following Cherry Creek, Goodnight brought his herd of Texas Longhorns into Denver where they were purchased by prominent Colorado pioneer John Iliff.”
Searle, who headquarters just east of Monument and winters his herd near Ellicott, says he and his foreman Gary Lake will have the help of cowboys from other ranches including Kit Haddock of Monument, who ranches in eastern El Paso County, when they push the herd onto the streets of Denver. Searle Ranch has provided Longhorns for other parades and events including annual cattle drives through Colorado Springs to promote the Working Ranch Cowboys Rodeo.
“Longhorns are probably the easiest breed of cattle to handle in a strange environment, even though they come off pastures where they live virtually unassisted year around.” He adds that “they are also the most interesting---not only because of their big horns but because they’re the original cattle of the Americas.”
Searle says the downtown drive helps build awareness.
“We like to let people know that the West is still alive, that ranching and cowboys are still a vital part of the Colorado economy.”
###
Posted by ___ Restless Native at 6:47 PM