The passage of time and Woodmoor 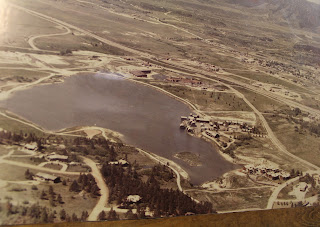 Woodmoor has a poetic ring to it.

Somewhere about 458 B.C. Aeschylus figured out that “Time brings all things to pass.”
Though announcements involving housing developments and such, have become quite commonplace in Northern El Paso County, I think it is interesting to take a trip back though those passing gates.
One fine spring day 52 years ago, word hit the streets of a large housing project in the Black Forest area.
“Woodmoor has a poetic ring to it. The word is so quiet sounding it could be a rumor. But it isn’t,” wrote Ralph Moore of the Denver Post in a March 22, 1965 article.
Moore noted that owner /developer Steve Arnold, “unpretentious and slight of build, a conservative in many ways, is busy promoting a pretentious 2,000-acre housing and recreational project in the Black Forest east of Monument.”
Arnold, 31, also described as a former Air Force captain who didn’t even play golf, graduated from the U.S. Naval Academy in 1956, and was a native of Los Angeles.
“Chief among the attractions at Woodmoor is an 18-hole, 7, -150-yard golf course which is hewed out of the forest by craftsmen who had little regard for hooks and slices.”
After graduating from the Naval Academy, Arnold reportedly chose the Air Force and spent his early military career at Lowery Air Force Base in Denver.
“Knowing the Air Force Academy would be located south of Monument, Arnold purchased 60 acres of land in the Black Forest because he thought it might be wise to own land near the AFA,” according to the Post story.
“He spent the 1958-1960 period with a flying squadron and in August, 1960, was transferred to the AFA as a freshman Gymnastics coach.
“Meanwhile, he kept adding to his holdings in the Black Forest, nursing the idea that someday their would be a need for a community in the area for the above-average income group. ‘It was just a belief,’ he says.”
At the time this article appeared, it was reported that Arnold had already sold more than 200 home sites in the price range of $4,000 to $11,000.
“Cranked into the project are plans for riding stables, shopping center near the Monument cutoff plus a motel,” Moore wrote.
J. Pres Maxwell was tabbed to design the golf course and a former assistant pro at Denver’s Pinehurst Country Club, Bob Hansen, was given the nod as the resident pro.
“Membership in the golf club is automatic with the purchase of a home site. Otherwise the price is $75 initiation plus dues. Anyone outside a 35-mile radius, meaning metropolitan Denver, can become a member for $500 with no dues attached,” Moore wrote in the Post.
The development’s front nine was expected to be completed and playable by August and the back nine, to be ready by the spring of 1966.
However, it appears that construction on Lake Woodmoor Dam, did not begin until December of 1967. “Construction started Thursday on the 50-acre Lake Woodmoor Dam located in the 2000-acre Woodmoor subdivision near the Monument Interchange north of the United States Air Force Academy,” said the Palmer Lake Monument News (a forerunner of the Tribune) on Dec. 14, 1967.
“Steve Arnold, president of the Woodmoor Corp., stated that the 350,000 cubic yard dam structure is part of the $16 million project that will include residential homesites adjacent to the water’s edge on the half-mile long lake. There will also be townhouse and garden apartments located adjacent to the lake which will make it the only year-round residential lake community in this area,” said December paper in 1967.
“There will be six private sandy beaches for the use of Woodmoor residents and numerous boat docks constructed for the use of boating enthusiast.”
“Sailboating and fishing will be the primary activities on the lake and will be centered around the marina and boathouse located at the water’s edge. Sailboat regattas will be featured as frequent events on the lake,”Arnold said.
Well, time brings some things to pass, anyway.
Posted by ___ Restless Native at 7:00 PM

You might be interested in knowing that the sailboating and fishing did come to pass, as did the riding stables, the shopping center, and the hotel. Woodmoor was a resort community until Woodmoor, Inc. went bankrupt in 1973. The bankruptcy was due to a dispute with their creditor. Woodmoor, Inc. would eventually win their legal battles with their creditor in 1986, but long before that Woodmoor’s assets were carved up and sold off due to the bankruptcy. Woodmoor Water and Sanitation became a separate utility and would buy Lake Woodmoor as a water source then they would ban all recreational use of the lake. You can still find evidence of the marinas and docks if you look carefully. The older townhomes near the Woodmoor Barn were originally built as rentals along the lake. The Country Club became separate as well and has gone through many owners, names, and several bankruptcies of it’s own. The riding stables were sold off and used privately until that land in turn was bought to build Palmer Ridge High School in 2007. The bridal paths through North Woodmoor, connecting the common areas, have been lost to time but the easements still exist for them on the property deeds and you can locate them on the original Woodmoor maps. There was a Woodmoor Police Department which would later be changed to Woodmoor Public Safety due to changes in state laws - there was a time in the 1970s when tiny Monument contracted to use Woodmoor police services. The south Golf Course was never built, the property was instead bought by a private family, and remains unoccupied today except for the townhomes build along Higby Road circa 10 years ago. The shopping center was sold off and is now, of course, Woodmoor Center along Lake Woodmoor Drive with a number of business from a micro-brewery on one side to the Library on the other. The hotel is now the Ramada, having itself gone through many changes in ownership over the years.

While Woodmoor is a wonderful place to live now it is kind of sad to think of what might have been.