Can't think of a better thing to do

The perfect opportunity to say thank you to veterans 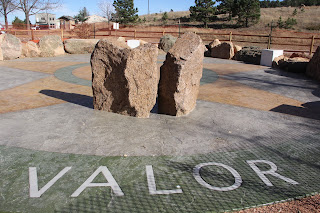 Originating as “Armistice Day” on Nov. 11, 1919, the first anniversary of the end of World War I. Congress passed a resolution in 1926 for an annual observance, and Nov. 11 became a national holiday beginning in 1938. Veterans Day pays tribute to all American veterans — living or dead — but especially gives thanks to living veterans who served their country honorably during war or peacetime.

Locally, and individually, we all have our own heroes. Bill Crawford, Jim Newbrough, and a host of other local guys that served in the various branches. Today, it is estimated that nearly 100,000 veterans live here in El Paso County and about 40,000 active duty.

We have roads named, William Crawford Highway (105) through Monument. We have the recent memorial built (mostly by local vets) on the edge of town in Palmer Lake that will be dedicated this next weekend.

Crawford was born in 1918, and from Pueblo, Colorado, and later joined the U.S. Army from that city in July 1942. By September 13, 1943, he was serving as a private with the 142nd Infantry Regiment 36th Infantry Division in southern Italy. On that day, he was acting as a squad scout when his company attacked Hill 424 near Altavilla Silentina. During the battle, Crawford twice moved forward through continuous fire and, using hand grenades and his rifle, destroyed machine gun nests which were holding back his platoon's advance.

After the battle, Crawford was captured by the Germans and presumed dead. So in 1944 the Medal of Honor was presented posthumously to his father. Later in the year, Crawford was among a group of soldiers rescued from German captivity.

On January 13, 1946, he married Eileen Bruce. He re-enlisted in the Army in 1947, retired in 1967 with the rank of master sergeant. He later worked as a janitor at the United States Air Force Academy in Colorado Springs and as director of the Lucretia Vaille Museum in Palmer Lake.

While working at the Air Force Academy, he mentioned to friends that he had never received the Medal from the president. In 1984, during that year's graduation ceremony, President Ronald Reagan formally presented him with the Medal.

Crawford died at age 81 on March 15, 2000, in his residence at Palmer Lake. Upon his death Governor Bill Owens authorized all Colorado flags to be lowered to half staff in his honor. He is buried at the United States Air Force Academy Cemetery in Colorado Springs, the only non-USAF, US Army enlisted person buried there. He is one of four Medal of Honor recipients from Pueblo, Colorado, the others being Drew Dennis Dix, Raymond G. Murphy, and Carl L. Sitter.

Jim Newbrough, the great grandson of David McShane, a Monument pioneer who built a fort on the edge of town in the 1860s. Newbrough was awarded the Silver Star with Oak Leaf Cluster for his heroics in the Mundi Air Strip Battle during World War II. He single-handedly manned a machine gun nest at that Pacific outpost and is credited with saving the battalion that day.

“As the fight progressed, Newbrough, alone on the gun, kept it going constantly,” said Yank Magazine in December of 1943. “Nobody, not even he, knows how many belts of ammunition he expended. As the gun continued to fire, it attracted more and more attention until it seemed that Newbrough was the only target. Bullets spattered onto everything, cutting down the shelter, half on top of him and clearing the underbrush from around him.”

Next week, a number of celebrations, tributes and events thank Veterans for their service. I can’t think of a better thing to do.
Posted by ___ Restless Native at 5:50 AM