The second oldest race in the country 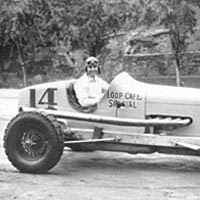 Still plenty of magic to go around.

This originally appeared as a newspaper column in 2006.

After years of the Pikes Peak International Hill Climb, I found there is a lot of history to boil down and it is difficult to summarize.
It made sense to touch bases with the people who lived it.
David Bachoroski, vice president of the Pikes Peak Hill Climb Historical Association, otherwise known as the "Over-the-Hill Gang," offered the following observations.
"Years ago I was working with Louis Unser ('the old man of the mountain')," Bachoroski said, "and I asked him what was the biggest change he's seen in the hill climb and he said, 'The tires were the biggest improvement.' Back when he started they had plenty of power but the power wasn't doing any good unless you could get it to the ground. It was common to go across the finish line with all your tires flat.
"I am very impressed that those old timers had the courage to drive at the speeds they did knowing that the tires could not take it and any second they were doomed to a disaster."
He said that Pikes Peak International Hill Climb was established in 1916 and is the second oldest race in the country - the Indianapolis 500 being the oldest with the first starting in 1911.
"Through the years the road has become wider and very well maintained, they are now paving the highway due to ecological concerns," Bachoroski said. "The overall record of 10:04.06 set by Rod Millen in 1994 in a '94 Toyota Celica GT could be broken this year. We can only hope so. After all, records are made to be broken."
Bachoroski identified the safety items that racers are now required to have as another major change.
"They could no longer sit on the gas tank," he said. "They had to start wearing seat belts and later shoulder harnesses. They had to wear a solid helmet and not just a leather cap with goggles; their cars later had to be equipped with roll bars and later roll cages, and they had to have working brakes on all four corners."
The early races from 1916-1929 were all open wheel cars.
"The Stock Car division was added in 1929," Bachoroski said. "It was dropped in 1935 and resumed again in 1956. The stock car division is now a permanent part of the Hill Climb but the open wheel class is still the crowd favorite. The open wheel class has been dominated through the years by the Unsers [Jerry, Louis, Joe, Jerry Jr., Louie, Bobby, Al, Bobby Jr., Al Jr., Robby, Johnny and Jeri], and the Stock car class has been dominated by the Vahsholtz family [Leonard and Clint].
"The Rally Class was introduced in 1981 which brought international attention to the Hill Climb."
Bob Gillis, TCI Tire Centers distribution center manager, has been involved in the race for years and agrees with the importance of the Unser legacy.
"With multiple family members winning - Indy winners have won on Pikes Peak - Bobby Unser, Al Unser Sr. and Jr., and in my opinion a very interesting fact is that Mario Andretti in 1969 got his only Indy win, and he also won Pikes Peak that year," Gillis said.
Donald Sanborn, former driver, timer and boardmember, echoed the importance of the Unser family impact.
"There are several Unser family members who have had a larger impact than others - Uncle Louis 'the old man of the mountain,' Bobby Sr., Al Jr. and Robby," Sanborn said. "But the entire family has left an indelible mark on the race. However, you can't discount what other families have accomplished.
"Now that Leonard and Clint Vahsholtz have bypassed Bobby Sr. and Robby as the winningest father/son combo, I've run into a number of people under the misconception that the Vahsholtz family has more wins than the Unser family," Sanborn said. "That's not true. Twelve members of the Unser family have raced on Pikes Peak 113 times for a total of 38 wins.
"The Vahsholtzes - Leonard and Clint - combine for 31 wins total, which puts them pretty close to the entire Unser family. Clint's 11 consecutive stock car wins is unprecedented. It's really an amazing accomplishment to pull off that stretch of wins on Pikes Peak.
"Rod Millen - of course you have to give a lot of credit to the guy who has held the record for so long and who has always brought some really amazing machinery to the mountain."
Sanborn calls attention to the transition from solid rubber tires to tires with air in them.
"Goodyear Pikes Peak Special was created just for Pikes Peak," he said. "Others could give you more details here but I believe the Goodyear Special was developed in the early '60s and is still the tire of choice. Though with more and more paving, it will eventually be supplanted by street tires."
Which brings us to a major change in the race in the last few years.
"The biggest story of all the years of racing is the Sierra Club lawsuit against the city Of Colorado Springs which the city lost, and the road has to be paved in its entirety - so after about 78 or 79 races on all dirt - the pavement was started and while not yet done, it is about 75 percent paved now. That took some of the magic away," Gillis said.
But there is still plenty of magic to go around.
###
Posted by ___ Restless Native at 6:28 PM