Christmas for everyone, even the dog 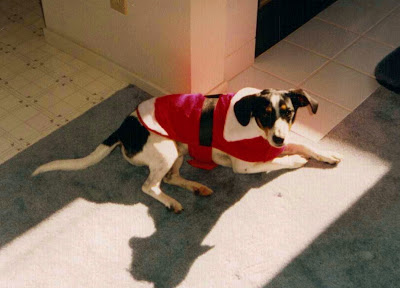 Probably the least demanding member of the family is the old dog. It is not a tortuous decision-making process to try to come with an adequate present that will make him happy. Throw him a bone any day, and he is convinced it is Christmas time.
He believes in keeping on the sunny side of the room — and life in general. Nothing suits him better than the morning rays beating down on his favorite, carpeted spot and reflecting off the light-colored wall behind him.
We don’t ask too much of him and his only requests come in the form of whiney little pleas for a taste of something off the grill, or pitiful petitions with his suppliant eyes for table scraps.
In turn, he offers the protective services of a thunderously menacing bark combined with the wild look in his eye that unnerves even the most-determined of door-to-door solicitors.
Though small in stature, he fears no dog, or any other creature for that matter. In fact, if it came to a scrap, he is so cocksure— beyond a thread of self doubt — of his own military might and physical superiority as to attempt bear wrestling, or a bout with a mountain lion, or even wage war with a porcupine. And though I am sure in each case, he might suffer debilitating damage in such battles, he is convinced he will eventually emerge victorious.
He gets up early because he believes the day should start with a brisk walk, preferably before daylight. Hopefully, it is not so cold as to make him want booties for his tender paws, but he will manage if necessary. If stiff and limpy from arthritis at first, by the end, his gait is natural and relaxed. If dogs know to smile, his is the widest.
Sometimes around the holidays, the kids dig out his red and white fur Santa suit, and the poor mongrel dresses the part. The first few years he was mortified, but now he barely notices.
Of course there is stocking for him. And he doesn’t know what is going on. But Christmas is for everyone, even the dog. Merry Christmas.
Posted by ___ Restless Native at 9:14 PM