“A prudent man foresees the difficulties ahead and prepares for them; the simpleton goes blindly on and suffers the consequences.” ___ Proverbs 22:3 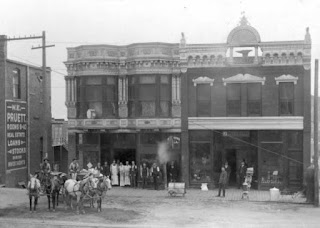 Not all the danger was in the mine

Since the beginning of time, we have been concerned for our own safety. It was no different for miners and others in Victor, Colo. in 1904, as evident in pages of the Victor Daily Record at the time.

Those folks seemed to have a lot to be concerned about.

"Overcome by four gases caused by blast made a few minutes before Edward Oatman, a well known  leaser residing at 414 Firth Street, this city, while coming up the ladderway on block 5 shaft of the Ajax property at 3 o'clock yesterday afternoon suddenly became unconscious and missing his grip on the landing dropped  a distance of twelve feet into the shaft to the bottom. He accompanied by his partner in the lease, W.A. Huntley, the well-known barber, had been working on the property for the greater part of the day and after making the blast determined to take samples of the ore loosened by the round of shots."

"According to their determination the two men at 2:45 o'clock climbed down the ladderway and after remaining at the bottom for 15 minutes in which they obtained the desired samples they started to the surface Oatman in the lead and Huntley following closely. While in the drift both men remarked about the gas arising therefrom and just before making their accent Huntley asked Oatman if the gases had bothered him whereupon Oatman relied in the negative."

"According to Huntley Oatman had just reached the landing twelve feet from the station when he suddenly let go of his hold on the ladder and fell backward into space. Huntley tried to break the fall , but Oatman who is a heavy man was not to be caught and with a heavy thud hit the bottom of the shaft. Huntley called to his partner several times, but without a response, and fearing that death had resulted from the fall he climbed to the surface and the assistance of W.C. Miller and the boss on the McDonald lease on block 4 of the property, were summoned. The two latter men descended to the bottom ad not finding Oatman anywhere started back into the drift where they found him in an unconscious condition on the newly made pile of muck. He evidently wandered there in an effort for fresh air. As soon as the men reached the stope where Oatman was found they applied the air and dragging him under the pipe revived him considerably otherwise death would have probably ensued."

Unfortunately, accidents were not few and far between in the mines of district in those days and the stories did not always have positive endings.

"Robert J. Orr, 42 years of age and single, stepped off bucket at the 300 foot level at the Jack Pot mine at 12:35 o'clock yesterday afternoon and dropped to the bottom of the shaft, a distance of 186 feet to his instant death."

"Deceased had been a resident of Cripple Creek for the past ten or twelve years and was well known and highly respected. He has mined nearly all the time he has lived here. "

The paper explained what happened when the men, returning to work after lunch were descending in the Morning Glory cage to the 700 foot level.

"The Bucket stopped off at the 300 foot level and (two miners) Wilcox and Hutchinson got off. Buiderbeck (riding with victim Orr in the cage) had turned partially from Orr and was reaching for the bell cord to ring to descend. Mr. Orr must have thought he was at the bottom of the shaft and he stepped off the bucket and fell feet foremost to the bottom hitting the bottom of the shaft on his feet. His left side was crushed and nearly every bone in his body was broken. Death was instantaneous. The other three men saw him fall and could see the body for 100 feet. It was upright, and his arms were outspread. They descended immediately and had him hauled to the surface in less than five minutes time. He was dead when the men reached him."

But accidents were not the only dangers in district. Labor and management were at odds (or really, at war) and even the Postmaster might be targeted for simple acts or possible testimony.  Several years later, the various parties were still sorting it out.

"The exclusive announcement in the The Record yesterday morning to the effect the rumors were afloat that Postmaster D.M. Sullivan was the victim of a heinous plot of assassination brought to the people of the district to the full realization of the length to which men may go in their insane greed for power and money. It also brought many to the side of Sullivan, who swore eternal revenge should such a crime be perpetrated. The announcement of the plot in the Record, however unquestionably frustrated the carrying out of any such murder, if one had been planned or calculated. Sheriff Edward Bell about Two o'clock yesterday afternoon sent Deputy Sheriff Harley Keegan to the Postmaster Sullivan at the postoffice and offered to give him any protection: to supply a deputy as his special body guard both day and night, if he had any fear of personal violence."

Sullivan said to Keegan: "I have not the least fear. I do not carry any guns or any other weapons save those furnished by nature. I am amply able to care for myself, and should I be killed it will be the work of some cur shooting me in the back. You can go back to Mr. Bell and thank him for his offer for protection, but I do not need it. You may also tell Mr. Bell that the man who said I would be under the sod before the Grand Jury would be called next week was no one else than Sheriff Bell himself."

Photo Information: The Miner’s Union Hall in Victor, Colorado in 1904.