Elvira campaigns to save Halloween 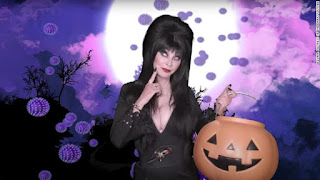 According to latest reports, Colorado Springs actress and Halloween icon, Elvira is coming out retirement.

"If there's a solid reason for staying out of the sun like a vampire, it's Elvira's stunning face," says Marianne Garvey, in a CNN post.

"The 69-year-old iconic horror character, real name Cassandra Peterson, debuted a 'Don't Cancel Halloween' video on Tuesday, looking like she hasn't aged a day since creating her alter-ego nearly 40 years ago," notes Garvey.
Cassandra Peterson was born in Kansas, Sept. 17, 1951, and is an actress better known as Elvira, Mistress of the Dark. Peterson graduated from Palmer High School, in Colorado Springs, CO, in 1969.
The video, posted to Elvira, Mistress of the Dark YouTube channel, the Peterson, as Elvira, performs a parody of Madonna's 1983 classic song "Holiday," changing the lyrics to stress the importance of Halloween and her love of trick or treating.
She sings: "I'm the Queen of Halloween/Covid-19 ruined everything/If they cancel Halloween/ cause we're still in quarantine/ It would make me so mad/It would suck/ It would suck so bad."
Several years ago, a Colorado Springs Gazette story by Stephanie Earls noted her retirement.

"After nearly five decades as an entertainer — dancer, singer, actress and, most recognizably, horror icon Elvira — Peterson is stepping away from the limelight to pursue other projects. She’ll take a final bow Oct. 31 at one of her career’s more enduring venues, Knott’s Berry Farm, where’s she’s headlined the Halloween show for 21 of the last 36 years," Earls' story said. "While at Palmer High School, she participated in choir. Peterson’s early career was colorful, including stints as a go-go dancer, lead singer of an Italian rock band, and member of the improvisational and sketch comedy troupe The Groundlings. In 1981, she auditioned to be the new host of a Los Angeles-based television program, formerly called Fright Night, that showed low-budget horror films. She won the role and introduced the TV audience to Elvira, who wore a low-cut black gown and black beehive wig and offered sarcastic commentary to accompany the often-campy movies. The newly-revamped show, now called Elvira’s Movie Macabre, became a hit and led to many licensed Elvira products and two movies. Peterson has also acted in other films, including Diamonds are Forever and Pee-wee’s Big Adventure.
Posted by ___ Restless Native at 6:27 AM