Virgil Caine is the name
And I served on the Danville train
'Til Stoneman's cavalry came
And tore up the tracks again
In the winter of '65, we were hungry, just barely alive
By May the tenth, Richmond had fell
It's a time I remember, oh so well
__ Robbie Robertson, The Band, The Night They Drove Old Dixie Down 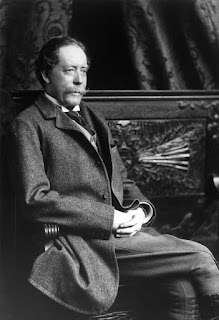 Foot steps. Tracks across the field in front of you. Remnants of a forgotten time, but with a memory attached ... of that time.  All evidence of a ghost, a presence from our past, a piece of our history that we might not understand — but it is there anyway. Like statue in the road of a man on cast iron horse downtown.

As the American Civil War began in 1861, although his Quaker upbringing made William Jackson Palmer abhor violence, his passionate abolitionism compelled him. He enlisted in the Pennsylvania volunteers and took a commission in the Union Army. He organized the Anderson Troop, an independent company of Pennsylvania cavalry, in the fall of 1861 and became its captain. Originally formed as a bodyguard for Brig. Gen. Robert Anderson, it instead served as the headquarters cavalry for General Don Carlos Buell, commanding the Army of the Ohio. Impressed with the "elite scouts" that Palmer had assembled, Buell detailed Palmer and 12 of his men to go back to Pennsylvania to recruit more men to form a battalion around the Anderson Troop that would be known as the "1st Anderson Cavalry."

In ten days of recruiting, however, Palmer received enough applications for enlistment to form a regiment, which was authorized as the 15th Pennsylvania Cavalry. He was appointed the regiment's colonel. Before Palmer was able to organize the regiment at Camp Alabama in Carlisle, Pennsylvania, he and a portion of it were ordered on Sept. 9 to help the Army of the Potomac resist the Confederates invasion of Maryland. For nearly a week Palmer, accompanied by a telegrapher, personally sought information of Lee's movements every night in civilian clothing, and transmitted his findings to General George B. McClellan by-way-of telegraph.

Two days after the Battle of Antietam, Sept. 19, 1862, Palmer was captured while scouting for McClellan, seeking information on any preparations by Lee's army to cross the Potomac River back into Virginia. He was on the Confederate side of the river, dressed as civilian and accompanied by a local blacksmith and a parson as his guides, attempting to recross to the Union side after midnight when he was captured by Confederate artillerymen sent to guard the dam he used for the crossing. When questioned, Palmer gave his name as "William J. Peters," and claimed to be a civil engineer from Delaware on an inspection trip. He was interrogated by General William N. Pendleton, who thought he was a spy. He was detained and sent to Richmond, Virginia, with a rambling note from Pendleton that was ignored.

"He later referred to this venture as an 'act of injudicious patriotism,'"according to military historian Gen. William E. Carraway. "Certainly it had a most unfortunate outcome, for he was captured in civilian clothes and was in real danger of being shot as a spy."

Palmer was incarcerated at the notorious Castle Thunder prison on Tobacco Row, Richmond where his true identity was never uncovered. Doubts about his identity were apparently reinforced by publication of a fictitious dispatch in the Philadelphia newspapers that purported that Palmer was in Washington, D.C. after scouting in Virginia. When he was freed after four months of confinement, he found that his guide, the Reverend J.J. Stine, had escaped but been arrested by Union authorities, accused of betraying him to the enemy. Rather than risk Palmer's life by publication of the circumstances in the Northern press, Stine had remained imprisoned in Fort Delaware until Palmer's personal application to Secretary of War Edwin Stanton resulted in his release.

Palmer was set free in a prisoner exchange for a prominent Richmond citizen, recuperated two weeks, and rejoined his regiment in February 1863. During his period of imprisonment, the regiment had become mutinous because of a failure to have officers appointed and other enlistment inducements it felt had not been honored. 212 troopers faced court-martial and the possibility of going before a firing squad for refusing to fight in the Battle of Stone's River. Palmer reorganized the regiment, personally appointed officers in whose abilities he had great trust, and had the charges against the confined soldiers dropped on the condition that they behaved going forward. The severely demoralized group of men rallied and distinguished themselves during the 1863 Tullahoma Campaign, the Battle of Chickamauga, the capture of Brig. Gen. Robert B. Vance's raiding cavalry and re-capture of 28 wagons of a foraging train in January 1864, and the Franklin–Nashville Campaign.

At Chickamauga, Palmer's regiment was detailed as headquarters guard for the Army of the Cumberland with many troopers doled out to the various corps as couriers and scouts. When Longstreet unexpectedly attacked the union right near Rosecrans' headquarters, Palmer gathered all the men of his regiment available and prepared to counterattack with a saber charge. The Union right flank dissolved, however, and after attempting to rally the panicked infantry, his regiment crossed the battlefield in good order under Confederate artillery fire to protect the Union artillery. During the army's retreat to Chattanooga, the 15th Pennsylvania provided escort for the army's supply train. Not easily impressed, Major General George H. Thomas (the "Rock of Chickamauga,") recommended that Palmer receive a brigadier's star for his success at turning a highly demoralized group of men to an effective group of soldiers.

Palmer was vigorous in pursuing Confederate General John Bell Hood after the Battle of Nashville in 1864. On March 9, 1865, President Abraham Lincoln nominated Palmer for appointment to the brevet grade of brigadier general of volunteers at the age of 28, with the U.S. Senate confirming the appointment on March 10, 1865. On March 16 he was promoted to command of the 1st Brigade of the Cavalry Division, District of East Tennessee, consisting of the 15th Pennsylvania, the 10th Michigan, and the 12th Ohio Cavalry Regiments. A month later he assumed command of the division after General Alvan C. Gillem was promoted to command of the District of East Tennessee.

Palmer was in the vanguard of Union General George Stoneman’s raid into Virginia and North Carolina in the last two months of the Civil War. At Martinsville, Virginia on April 8, 1865 Palmer's cavalry defeated a Confederate force of Cavalry commanded by Colonel James Wheeler, the cousin of Confederate Cavalry commander Fighting Joe Wheeler. If Palmer had pushed on to Danville, only 20 miles to the north, he might very well have captured Jefferson Davis, who up till then had not left the capital of the Confederacy. Davis subsequently left the next day, upon receiving word of Lee's surrender. This was a little-known campaign immortalized in The Band's epic, "The Night They Drove Old Dixie Down."

Palmer commanded the cavalry pursuit of Jefferson Davis following the surrender by General Joseph E. Johnston. Davis was followed through North Carolina, South Carolina, and Georgia and driven into the hands of General James H. Wilson. During the pursuit, Palmer's former command overtook and captured wagons carrying millions of dollars of specie, bonds, securities, notes, and other Confederate assets,  in Georgia, near Covington, that had been kept in the Bank of Macon (Georgia).

• Worked for the Pennsylvania Railroad and learned all he could about a railroad company and engineering. Became private secretary to President John Edgar Thomson.

• First person to suggest that trains should burn coal and not wood, which was running out in some
areas.

• Pennsylvania Railroad became the first to switch to coal.

• Disapproved of violence but believed in ending slavery and served eventually as a general in the Civil War.

• Medal of Honor winner for his actions as colonel leading the 15th Pennsylvania Cavalry at Red Hill, Alabama, January 14, 1865 where "with less than 200 men, attacked and defeated a superior force of the enemy, captured their fieldpiece and about 100 prisoners without losing a man."

• Founded the Denver & Rio Grande Western Railroad with his friend, Dr. William Bell. The first tracks went from Denver to Pikes Peak area, the heart of mining at the time.

• Married Mary Lincoln (Queen) Mellen in 1870. On their honeymoon in the British Isles, Palmer saw a narrow gauge railroad in the Welsh countryside. Narrow gauge is cheaper to build, can make sharper turns, and climb steeper slopes.

• In the spring of 1880, Palmer was made president of the Mexican National Railway (now National Railroad of Mexico).  Most of the line was completed by 1883 when the railroad reached Mexico City.

• Retired to Colorado Springs, one of the cities he founded.

• Helped to establish the Colorado School for the Deaf and Blind, a tuberculosis hospital, and Colorado College.

•  Developed rail-related industries in Colorado, such as a large steel mill near Pueblo.

•  The Rio Grande and its successors eventually operated the largest network of narrow gauge railroad in the United States. They were ultimately absorbed by the 21st century Union Pacific Railroad.

• Public schools in Colorado Springs were named for both him and his wife, Mary (Mellen) Palmer, who was known by her nickname of "Queen."

• A statue of William J. Palmer (on his favorite horse Diablo,) still stands in downtown Colorado Springs, across from the school named in his honor.