Temperance, an out-spoken Democrat, in the General's paper 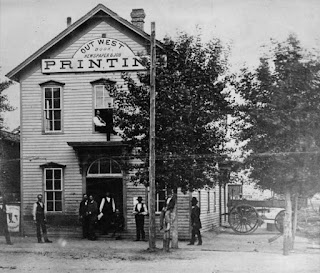 General William Jackson Palmer founded a newspaper and printing business at about the same time as he founded the city of Colorado Springs.

The publication began as Out West, beginning March 23, 1872, but failed shortly afterward. Undaunted, the company relaunched as The Colorado Springs Gazette, and the first issue was published on January 4, 1873.

Among the liveliest early debates carried on in the Palmer-founded city, in the paper the General financed, was the subject of temperance and the unlikely discussion of Judge W.H. Baldwin's life and times. The two-sided discussion carried on, even long after the Judge was gone, according to historian Marshall Sprague, in "Newport in the Rockies."

"... Judge W.H. Baldwin, one of the celebrities of the mountain West, who stumbled into a shallow well and drowned at Green and Stitzer's Slaughter House. The fame of Judge Baldwin (the "judge" derived from the fact that he judged sheep once at a Colorado Territory fair) was many-faceted. He had been scalped  by Indians in South America and shot twice by Arapaho Indians near Monument Creek (the Arapahos would have scalped him if he hadn't been scalped already.) He had never been seen even slightly sober. Last, but not least, he was El Paso County's only outspoken Democrat, fond of haranguing staunch Republicans like (Major Henry) McAllister and (Gen. William) Jackson on the rights of man and Jeffersonian democracy," wrote Sprague.

"Judge Baldwin's untimely death at age forty-six should have ended his career, but it didn't. The oratorical toper lived on as an object lesson which kept the town in a state of division for years," he wrote. "The issue was the General's liquor ban, championed by the editor of Palmer's Gazette, J. Elsom Liller."

"When Palmer told him (Liller) to uphold liquor ban in the deeds of the Colorado Springs Company, he took the General at his word and backed the ban editorially with every ounce of his limited strength, come hell or high water and let the chips fall where they may."

The Colorado Springs Sun was a broadsheet-format newspaper published in Colorado Springs, and was a daily newspaper that competed with The Gazette-Telegraph until 1986, when Aero, a Freedom division, bought it for $30 million, shut it down, retaining its trademark and naming rights.

The Colorado Springs Gazette-Telegraph name was changed to The Gazette in 1997. The sale of The Gazette to Clarity Media, a subsidiary of the Anschutz Corporation, closed on November 30, 2012. 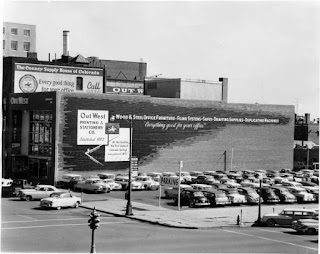 Corner of Pikes Peak Avenue and Cascade Avenue in 1957 showing the side of the Out West building with sign on the wall and parking lot on the corner. View of buildings and parked cars. Building signs read: "Out West Printing & Stationery Co. Established 1872 / At this location the first stake of Colorado Springs was placed 1871 / Wood & Steel Office Furniture--Filing Systems--Safes--Drafting Supplies--Duplicating Machines 'Everything good for your office' and "The County Supply House of Colorado." Photo from Pike Peak Library District.