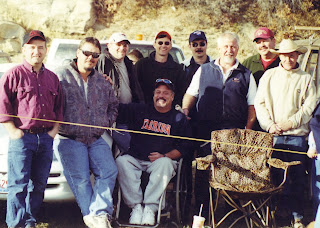 We would never again be connected by the same passion and change.

This story first appeared in the Denver Post when I served on their Voices panel in 2004.

I stared at the photo of my buddies at the football game for the longest time without realizing what was wrong. Something was missing. Then, after tossing the photo on the scanner, the image software forced me to put a name to the puzzle.
“Where’s Leavell?.jpg” the label now reads. In the photograph there is an empty seat in the front row on the right-hand side. A brain tumor killed our friend Lynn Leavell more than six years prior, but that didn’t stop him from leading us home.
Lynn was our quarterback for the Dolores Bears in 1978 and ‘79.
He later coached, taught and served as principal in Akron, Colo. In November, Dolores and Akron met leading up to the Colorado Single A football quarter finals. If played in Akron, the game would have been played on Lynn Leavell Field. But in Dolores that fall, Lynn reined in absentia over an important homecoming.
When I showed up at the game in November, it was out of respect for Lynn’s memory and the circular coincidence surrounding a Dolores/Akron playoff game. Others, I think, showed too, for similar reasons. His cousin Scott Weinmaster, picked me up in Colorado Springs in a rental car after a flight to Denver from his home in Florida.
We spent a lot of time talking about Lynn, on the way down to Dolores, and then with others when we arrived. To us he was not really a hero figure but just an above average cat. In examining the hole he left in our lives, we struggled for a better grip on understanding our own existence.
In the words of our coach, Carl Rice, “Lynn’s talent was that he was cool under pressure and the most stoic youngster I have ever met.”
He was a planner who usually had a laser beam focus. He set his goals early and often. As a result, he generally had a pretty good success ratio, and a facade of at least appearing calm. His public persona was of one of a man way beyond his years. It was as if he knew his ticket was punched for the matinee only.
Lynn was also an assistant coach in Akron under Rice. Carl Rice now lives, coaches and serves as principal back in Akron.
“He was like a son. I was and am proud of him. His flaws, like all of ours, are better left to the wind,” says Rice. “We each have a responsibility to teach honor within the confines of our own life.”
“He was his own worst enemy because he acted like he needed nothing but he needed support so much he felt guilty. You guys think he was different than you. I don’t see him that way. He just didn’t ask as much.”
But as usual, in that November, we were asking a lot from Lynn and his memory. Dolores football and seeing old friends was one thing. But personally, I hoped for connection. The kind of connection to a group where you can finish each other’s stories — even if you haven’t seen other members of the group in more than 20 years. As we settled into old familiar roles, I found some of that connection.
At one point, in an argument with Weinmaster and James Biard about what to make of Lynn’s death, I asked for peace. I think they both misunderstood me. I wanted peace, not in the sense that he was gone, and I needed to accept it. But peace in what his absence represented.
With Lynn’s absence—without him being in the picture anymore— two lessons were driven home with the force and violence of helmet-on-helmet, head-on tackling drills. First, that life is short and you need to make the most of it.