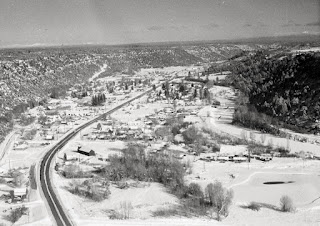 Those that looked like they could afford it the least, were the most generous

The ice and snow was melting fast enough that three inches of water ran below the white crust in the low spots of the street. Step off a curb in low-topped shoes or boots,  and a person ran the risk of filling shoes with water. But the temperature was dropping fast and it would all be ice again by sundown.
The 12-year-old newspaper carrier was trying get all his papers delivered Friday afternoon, Christmas Eve. And He wanted to still drop off a few calculated Christmas cards to soft-touch subscribers that might pop for a tip now that the temperature was dropping with the setting sun.
He knew he looked cold enough, right now, that the German lady was good for at least a cinnamon roll. But he might have to pick the raisins out.
The paper boy wanted to leave enough time to go by the hardware store before it closed to get a hot cup of Joe. All the high school kids that worked there would either be shoveling snow on the warehouse docks, or salting ice back near the gas meter. They always offered coffee but warned him that it would stunt his growth.
He slogged on through the soggy, icy streets into the poor part of town -- not that any of it was very rich. Low-roofed shotgun shacks lined one side of the street near the river but an open field on the other side marked where the narrow gauge tracks for the ‘Galloping Goose’ once ran. Most of the tracks had been pulled up sometime in the ‘50s. In a few out of the way places, like Lost Canyon, you could still pick up spikes and telegraph insulators.
Tony Martinez, one of his subscribers on Railroad Avenue, invited him in one of the shacks and gave him five bucks. Candles burned in the holiday spirit in a small religious shrine.
When he left Tony’s, he angled back through the real hard-luck section where the old Victorians were nearly falling down from neglect. Some of them were missing newel posts and had holes in the porch floors.
Behind one of these rotting relics, his newest customer lived and he had to navigate past Jake, a particularly menacing Black Labrador. Show no fear. Growl back. Stand tall, and be prepared to run if that didn’t work. But today, Jake didn’t think biting him was worth getting his feet wet.
The building looked like it had been a two-car, detached garage converted into single-family dwelling. And these folks had five or six grubby, curtain-climbers stuffed into there, all gathered around the wood stove. They invited him also, and gave him an army-surplus wool scarf, his best gift to date.
Isn't it interesting that those that looked like they could afford it the least, were the most generous. The paper boy thought about that, and waddled, wet-duck style, toward home through the soggy, freezing streets.
###
Posted by ___ Restless Native at 6:18 PM