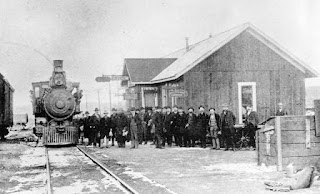 Daring attempt to hold up Midland 3, Near Divide,


As the result of an attempted train robbery on the Colorado Midland between Divide and Florissant, one robber is dead, Engineer Stewart is shot in the leg, and unknown hobo dangerously injured.
The other two robbers have made their escape, but a posse organized by Sheriff Phul of Cripple Creek has taken their trail.
When the Midland westbound No. 3 in charge of Conductor Wesley Steel reached Divide, shortly after midnight, one of the robbers climbed onto the tender and when the train reached milepost 32, a short distance beyond, covered Engineer Stewart with a revolver. The train has stopped at this point to meet No. 4 eastbound. Stewart, however, drew his revolver when the robber opened fire, the bullet hitting Stewart in the leg. Stewart opened fire and shot the man dead.
Just at this moment the other bandits sent a fusillade of bullets into the express car but the messengers refused to open the door.
The train crew by this time had on their fighting clothes and a hail of bullets was sent in the direction in which the robbers appeared to be located. It is believed that there were three men engaged in the holdup, one of them crawling on the tender and the other two at the rendezvous at the point where the No. 3 and 4 usually meet. The other two disappeared in the darkness.
It was discovered after the excitement that an unknown hobo riding the rods on the No. 3 had been accidentally shot by the train porter.
Engineer Stewart and the unknown hobo were taken to Colorado City on the No. 4.
As soon as possible Sheriff Von Phul, of Cripple Creek, was notified and he directed his deputies at Florissant and Divide to take the trail.
The coroner has also started for the scene to take charge of the remains of the dead robber which lie beside the track where he was placed after Engineer Stewart had killed him. Engineer Stewart's home is in Colorado City.
Colorado Springs, Sept. 2 --
Dr. O. G. Place of Denver, happened to be on the train when the shooting and the attempted holdup occurred, and at once took charge of Stewart. A tourniquet was at once applied and without much further loss of blood, the injured man was brought to this city and taken to St. Francis Hospital.
At Colorado City, Dr. G.S. Vinyard boarded the train and accompanied the wounded man to the hospital. Both doctors connected with the case agree that Stewart is in no danger.
The weapons used by the daring robbers are of a cheap make of Smith & Wesson pattern. They were worn in a broad leather belt around the waist and had evidently been unused for some time.
According to the injured engineer and the train crew, the man was of good size, speaking with an accent of a Scandinavian, and was rather shabbily dressed. When he climbed over the tender of the engine, he had a cloth mask over the front of his face, and a sort of gunny sack across his chest.
From the details which can be gathered, it appears that the robber evidently had designs on the passengers, for there was no unusual shipment in the Wells Fargo consignment in the express car at the time and the robber told the fireman while he was on his way back to the express car that he was "After the passengers too."
Several of the passengers who were on the train stopped in the city. Among them was Mrs. M.C. Roach, who said that she know nothing of the whole affair until after the train was on its way and she thought that the engineer had had his head blown off.