Bullet holes in the warning signs 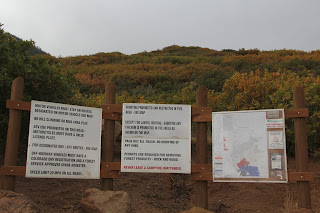 As bicyclists were unloading equipment for the memorial ride for Tim Watkins on Mount Herman Road that Saturday in late September of 2017, I could hear the gunshots in rapid-fire succession coming from the canyons above. Nothing new, I guess, but it troubled me considering the circumstances.

The Forest Service Ranger District had banned target practice in early July of 2014, so I wasn’t supposed to hear that.

A 12-mile section of the forest, in and around Mount Herman Road between Woodland Park and Monument was declared off limits to recreational shooting then by Forest Service rules that were clearly posted at the time and still are.

“The area closed to target shooting are areas of concentrated activity with many nearby roads and trails, recreational sites, private land developments and livestock grazing nearby. Restricting shooting in these areas reduces hazards to others who play, live and work within these areas,” said materials and map put together by officials of the Pike and San Isabel National Forest, they gave to me that July, three years ago.

Pfeiffer, and others place nearly 30 signs in the off limits area the week before as the new (at the time) rules went into effect. Patrolling on Mount Herman Road that Friday, he noted that the first sign crews put up on the Tuesday prior, already did have “fake” bullet holes stickers on it.

Barb Timock, public affairs officer in the district’s Pueblo office, also said that the public had been supportive of the, then new rules.

She said near misses, whizzing bullets and other danger, over time prompted the official action, but the district consider it carefully and was ready with signs, maps, educational material and an enforcement plan.

“The Pike National Forest has many places to enjoy your favorite recreational activities, including target shooting if done in a safe and responsible manner,” said the material at the time. Estimates from the district held then that 94 percent of the forest was still available for recreational target shooting.

The Forest Service imposed shooting bans in and around the area where Tim Watkins body was discovered in July of 2014, but many locals say they commonly hear and see evidence of violations against that ban in that area.

“As always, the County Sheriff is the lead for this type of illegal activity. The USFS will continue our patrols and encourage the public to follow the safety recommendations of the Sheriff to be vigilant,” Timock said.

“The Sheriff is the best source of information on the amount and details of illegal activity in the County. The USFS is certainly aware of illegal activities that takes place in these thousands of acres. (I don’t have access to USFS law enforcement figures.)

“We rely heavily on our partners in law enforcement to do the bulk of patrolling and enforcement in the County. The Pike and San Isabel National Forest is over two million acres. That is a lot of ground to cover no matter how many patrols,” she said.

“The Sheriff’s Office did a good job of reminding our public of safety precautions. We rely heavily on our partners in law enforcement to do the bulk of patrolling and enforcement in the County. The Pike and San Isabel National Forest is over two million acres. That is a lot of ground to cover no matter how many patrols,” Timock said.

But, in contrast to those fake bullet hole stickers that first week. Many of the the signs on the route have real ones in them now.
Posted by ___ Restless Native at 6:57 AM