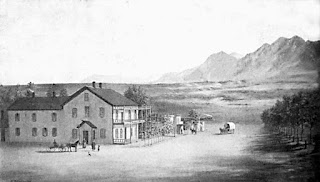 The 'Camp Cure' and 'West Cure,' as well as other various takes on outdoor cures were popular in Colorado in the late 1800s, which in turn, led to a Hotel boom locally — the likes of which might have made hospitality developer Donald Trump happy 100 years later.
Monument benefited from the popular practice of hospitality building with at least three hotels of its own the early days.
Anxious and tired male intellectuals (including Theodore Roosevelt) were sent West to rough ride, rope steer, and bond with other men.
"Physician Silas Weir Mitchell is perhaps best remembered for his 'Rest Cure' for nervous women, depicted by his onetime patient Charlotte Perkins Gilman in 'The Yellow Wallpaper' (1892). In the harrowing tale, the narrator slowly goes mad while enduring Mitchell’s regimen of enforced bed rest, seclusion and overfeeding. This oppressive 'cure' involved electrotherapy and massage, in addition to a meat-rich diet and weeks or months of bed rest. Historians now view Mitchell’s “Rest Cure” as a striking example of 19th century medical misogyny," said Anne Stiles in a 2012 American Psychological Association publication titled Go rest, young man.
"Less well known is Mitchell’s method of treating nervous men. While Mitchell put worried women to bed, he sent anxious men out West to engage in prolonged periods of cattle roping, hunting, rough-riding and male bonding. Among the men treated with the so-called “West Cure” were poet Walt Whitman, painter Thomas Eakins, novelist Owen Wister and future U.S. President Theodore Roosevelt," wrote Stiles.
"The Monument Hotel was considered one of the finest for complete rest and relaxation when it was built in 1870. It was owned and operated Col. J. Ford and his wife. It had 19 sleeping rooms all furnished and carpeted in the early style. It had an elegant parlor, office and adjoining reading room. Col. and Mrs. Ford came to Monument from Maine," according to local historian Lucille Lavelett in Through the Years as Monument, Colorado.
"The dining room was supervised by Mrs. Ford and her meals were the finest, The windows and the veranda to the West afforded a beautiful view of the mountains and invalids desiring a quiet, comfortable home found the hotel a lovely place to stay. The charges were $2 per day with generous reductions by the week. Others who operated the hotel were Dr. and Mrs. Ballou, Dr. and Mrs. Rupp, and Mr. and Mrs. Roy Petrie. Other hotels in town were Park Hotel, Ironside, and Grand Arm.
"The climate of Colorado is consider the finest of North America," said British explorer Isabella Bird, who in her letters extolled the curative effect of the Colorado climate.
"Consumptives, asthmatics, dyspeptics, and sufferers from nervous diseases, are here in the hundreds and thousands, ether trying the 'camp cure' for three or four months, or settling here permanently. In traveling extensively through the Territory, I found that nine out every ten settlers were cured invalids."
The current location is now where the building for the proposed methadone clinic was being considered and served as the former post office from 1975 to 2000 on Front Street Monument.
The Fords resided themselves, at  175 Second St., about 1875.
A Civil War veteran, Colonel and Mrs. Ford were founding members of the Monument Presbyterian Church in 1874. Their home had the first water system as evidenced by their tank and windmill.
But the hotel boom was somewhat short-lived, as the large wooden frame structures were susceptible to the ravages of fire.
On Feb. 27, 1904, the Park Hotel, and the Post Office at the time, burned. Francis Bell was postmaster, and Clerk of the Presbyterian church.  All church records up to that point were burned. These buildings were on Front Street, south of Second Street.
"I not sure about the the date, but this is the same time, Iron Side Hotel burned. This was near the (Limbach) park," writes Lavelett.
On March 24, 1922, the Monument Hotel burned. Roy Petrie and his wife were operating the hotel at that time, but it was an end of an era for the hospitality business in Monument. 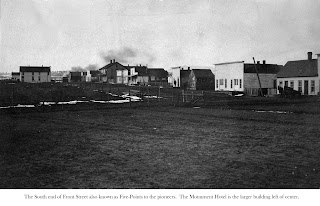 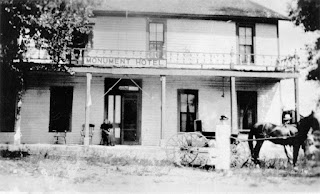 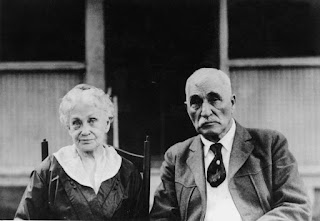 Photo information:
1. Monument Hotel, built in 1870.
2. The South end of Front Street, also known as Five Points to early settlers. The Monument Hotel is the larger building to left of center.
3. Monument Hotel, under Dr. Rupps ownership.
4. Col. J. Ford and his wife.