Bullfights, BS, Soap, Gillett and we are still telling the story 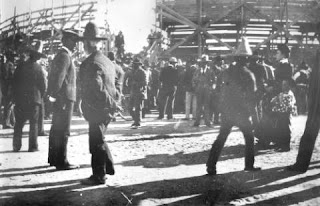 First, and apparently only real American bullfight was a short-lived success

The story was so compelling that United Press International was still retelling their own versions of the yarn across the country 71 years later, in 1966.
"One of Teller County's most famous historical events, the nation's first authentic bull fight back in 1895, was recalled this week in a widely circulated article by the United Press International, the wire service feature published by a large number of daily newspapers across the country," noted the Ute Pass Courier in its Dec. 8 edition in 1966.
"The sheriff said, 'Shoot the bull!' and the Governor cried 'Bring on the militia!" — but the only true bullfight known to have been staged in the United States went on to it's blood conclusion," the UPI story dramatically related.
"That was here in Gillett 71 years ago and the humane association that was ag'in it then, is still ag'in today. So are all the states of the Union, where it is outlawed," went on UPI.
"Mock bull fighting,  in which the bull is teased, but neither wounded or killed, has been tried in various parts of the country but without any resounding success and against the continuing protests of the be-kind-to-animals groups.
"Even that first and apparently only real American bullfight was a short-lived success. The promoters of the 1895 were towering 'Arizona Charlie' Meadows, said to be seven feet tall and noted wild west performer of his day, and Joe Wolfe, a wild west show promoter and hotel operator.  They advertised a 'lady' bullfighter but actually the lady proved to be one Jose Marrerro, described by the Denver Rocky Mountain News as a "magnificent figure with a long, shining sword."
Wolfe himself had a legendary reputation as scoundrel, and locally crossed the path of Cripple Creek Crusher (forerunner to Cripple Creek Times) editor E.C. Gard path in Cripple Creek in his administration and management of the Clarendon Hotel, Gard let loose because he felt Wolfe was attracting too much attention by throwing money around the gaming tables and consorting with shady characters.
“This curious hostelry is run by a red-faced, cock-eyed boob who ought to be back in Missouri flats pulling cockle-burrs out of a cornfield,” wrote Gard in the Crusher in the early 1890s. He proved to be on target when later Wolfe’s efforts to organize one of the only bullfights ever held in the United States at the racetrack at Gillett Flats landed him in jail and fleeing from creditors. But that is part of UPI's yarn.
"'Arizona Charlie' and Wolfe took over the fight at the race track with seats for 500, and 3,000 shouting aficianados  showed up," according to UPI's version. "Written accounts of the bullfight reported that the bull soon began faltering under Marrerro's repeated stabs and the local sheriff was so moved he ran to the promoters to demand it be shot. They said 'no,'  and the fight went on," reported UPI more than seven decades later.
"Another man caught in the middle was Colorado Governor Albert W. McIntyre who wanted to call in the militia to put a stop to the affair but was talked out of it," said wire service version.
"Marrerro was, of course, the victor that historic night of Aug. 24, 1895, although he apparently was not the most accomplished bullfighter extant. In the supreme 'moment of truth,' he missed with his first intended fatal stab, then killed the bull on his second try."
After the first bull, Meadows and Wolfe were arrested and the show was stopped.
"The $5 fines weren't enough to discourage 'Arizona Charlie' and his partner, however, and the show went on the following day.  Apparently though, most of the good folk of Gillett and environs, had had enough. The crowd dwindled to 300,  the fines were upped on the promoters, and that was the end to bullfighting in Colorado," reported UPI more than 50 years ago, 71 years after the only known fight.
Jan Mackell Collins, in her excellent new book,  "Lost Ghost Towns of Teller County" clarified some information and added detail about the bullfights in Gillett, not the smallest of which was the actual stature of "Arizona Charlie."
"The six-foot-six, long-haired, mustachioed man from Arizona must have been startling to the citizens of Gillett," she writes and explains that he started in Payson and Prescott rodeos before working his way into a seven-year stint in Wild West Shows, including Buffalo Bill's traveling troupe. Wolfe's contribution included the purchase of nine and half blocks of real estate. The two partners, after borrowing $5,000 to print tickets and build the 5,000-seat amphitheater, hire matadors, and promote the event with posters faced opposition right from the start.
"The authorities did ultimately stop the bulls and their keepers at the Texas border. But the matadors still came, and Wolfe and Meadows managed to wrangle some local bulls who were anything but fighting bulls. Things took an equally nasty turn when Wolfe invited renowned bunco artist Soapy Smith to set up games of chance outside the entrance to the event. Soapy took so much money from his victims that some of them could not afford the $5 ticket to get in," wrote Mackell Collins. 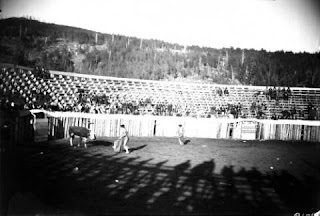 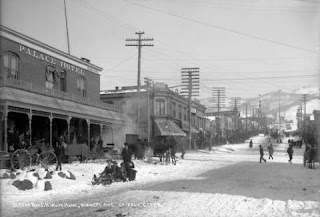 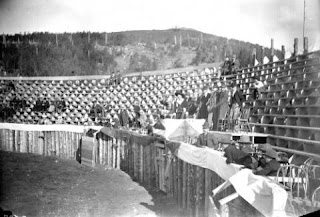 Photo information:
1. Outside the arena on the first, and most-crowded occasion of the American bullfight in Gillett.
2. Wolfe and Meadows constructed a 5,000 seat amphitheater in Gillett.
3. Wolfe had recently promoted the construction of several hotels in the mining district, including the Clarendon Hotel and the Palace.
4. By the third day of the fights, Aug. 26, 1895, the seats were nearly empty.