Go ahead and tell your story, but no need for details on entire 300 years 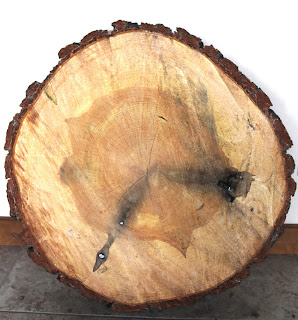 2016 Messages from Paradise and the Ponderosa Pines

Looking out the front window, across Paradise Circle, I noticed them working on several of the big Ponderosa pine trees in the lot that will eventually be the new Goodwill location in Woodland Park. The lot was part of the old Paradise Guest Ranch at one time, and has seemed like a dirt-moving school at times in the last 20 years, as McGuiness Realty yielded to Walgreens, and suggestions of bowling alley and other operations have come and gone.
At the Courier, we have on numerous occasions, used the big, beautiful giants as backdrops in our “outdoor studio” when we need to photograph someone in a story for the next week’s paper. Deer, bear, fox, wildflowers, snowstorms, classic cars, and cloud formations have all been subjects over there, as well.
All those years, perhaps as our five-person insert crew took a break or finished up a fist fight, out there on the back platform in the early days, I would wonder about all of the history, those 300-year-old trees had probably seen in their lifetime.
I was wondering again last week, and suggested to Laura Meyers, in bookkeeping, and who had been here off and on, an equal amount of time as myself -- that she should go ask them to cut a round to make a coffee table or something.
She did, and a day or so, later, a beautiful 208-pica (about three feet in normal-people measurements) storyteller round arrived out front, courtesy of Scott Donlon of Tiptop Tree Cultivation.
And what a story. Though we don’t know for sure what it is telling us.
A rectangular spike, perhaps a foot long and three-eighths inch thick is embedded in the tree. It has what looks like links of a chain connected and embedded as well, and it has been in there for awhile because the tree has grown in around it. How long?
“I counted the rings,” said Donlon. “And my best guess is about 1893.”
But the spike and the links were only part. “On the other side, I think those two are bullets, because the saw went right through them, like they were lead,” he said.
I asked him to speculate on what they used for. “Not really sure,” he said. “That was a long time ago, and they could of been doing anything.”
He noted that other trees in that batch had embedded electric insulators and had apparently been used as a makeshift powerline of sorts, one of them perhaps leaking power into the ground and killing the tree slowly from the inside-out.
But the story is not over. Donlon took the downed tree carcass over to Johnny Busby at Buzzsaw Busby’s Chainsaw Art, and Busby says that most of the pieces will be used to make a custom totem pole. Busby does mostly on-site chainsaw art now, at about $100 per foot for custom carving, all over the area.
In fact, he is working on possibly going into the former Andrew’s Candy building, with room for his own work and other artists displayed.
For about 10 years now, he has produced and sold all of his stuff to Bill Fee, at the Nature of Things, on Manitou Avenue in Manitou Springs, on contract basis. But because Fee’s recent health problems, he has been forced to find new outlets.
Busby says his favorite pieces are eagles, but he does a lot of bears, wolves, Jayhawks, and an occasional bobcat or other animal. Recently he was working on a custom Wyoming bucking horse and rider. “If I can draw it, I can carve it with a chainsaw,” he says.
Perhaps a piece of that big pine will be reincarnated, and come back to life as bear, or an eagle, or some other beautiful animal — or a storyteller. 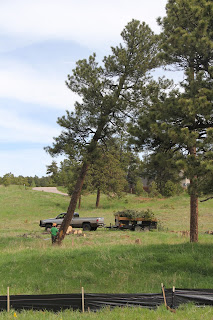 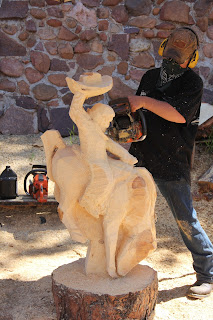 
Photo info:
1.
The round shows the spike with link attached on the right side and bullet holes and lead fragments on lower left.


Timber! A smaller tree leans to the right as it drops in the lot across Paradise Circle to make way for Goodwill.
3.
Johnny Busby is hard at work last week shaping the image of bucking horse Steamboat, and rider, into a custom piece for a client.

Photos and story by Rob Carrigan