Air show mishaps are no strangers to Colorado 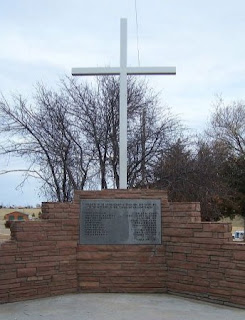 Though it was the worst, the Flagler incident was not Colorado’s last air show mishap.

Watching the crash landing of one of the Thunderbirds a few years ago, and with the death of Blue Angel Marine Capt. Jeff Kuss, from Durango, on the same day, I couldn’t help but recall other air show mishaps with links to Colorado.
Since the advent of airplanes, stretching nearly back to the Wright brothers, there have been air shows in Colorado. And almost since then, distinctively in Colorado, there have been air show disasters. Ralph Johnstone, who was trained by the Wright Brothers at Wright Flying School, established the pattern when he dropped from the sky to his death in front of thousands of spectators at Overland Park in Denver in 1910.
Arch Hoxsey, the other half of the “Stardust Twins” as he and Johnstone were known for their exploits in Wright Exhibition Flying Team, was killed in a very similar crash about a month later on New Year’s Eve in Los Angeles while trying set the altitude record.
Just a few hours before taking off in that effort, Hoxsey had telegrammed his condolences to the family John Bevins Moisant, who died in air crash near New Orleans the day before.
Flying was hazardous in those early days. And it was still deadly 40 years later.
“Flagler, Colo. – As the single-engine plane roared toward the crowd, Lyle Stone saw his parents each grab two children under their arms, jump off the low airfield fence, and run as fast as they could. Moments later, virtually everyone left on the fence was killed as the plane cut through the crowd like scythe. Twenty were killed including the pilot,” according to Kit Miniclier of the Denver Post in an article commemorating the 50th anniversary of the tragedy. Of the 20 victims, 13 were children. “Rhynold Fager remembers seeing a friend on her knees, dying, impaled by a propeller blade. Charlie Keller, whose wife and two children were killed that day, was able to identify his wife’s remains only by a birthmark on her leg.”
Today, a granite memorial with the names of those killed on Sept. 15, 1951, rests in a park across Interstate 70 from the airfield.
William Barker, a Denver Post reporter who was covering the event at the time, described it this way in the Post and the weekly Flagler News the next day:
“The plane crashed into the stunned mass of spectators from an altitude of less than 200 feet, cutting a bloody swath and strewing gasoline-drenched wreckage over a 150-yard area.
“The chaos that followed is beyond description . . . it was like the end of the world. Bodies were everywhere. The blood was everywhere too,” wrote Barker in 1951.
"I stopped as the scene ravaged my senses. Cars crushed. Bodies . . . and parts of bodies. Blood on staring faces. People milling like sheep around the fallen. Voices rising and falling oddly, without hysteria. Without panic. Stunned. Too stunned yet to believe what we were all seeing.”
Flagler, a town of only 600, had a hospital, but only two doctors, John C. Straub and William L. McBride. McBride, it was said, had delivered nine of the 13 children killed in the disaster. Medical personnel from miles around soon arrived to help out.
Though it was the worst, the Flagler incident was not Colorado’s last air show mishap.
In June of 1997, and Korean War-era F-86 fighter jet performing before a crowd estimated at 50,000 at air show in Broomfield, crashed in a massive fireball after failing to pull out of a steep dive. Retired Col. “Smiling Jack” Rosamond, 63, the pilot of jet was the only casualty when the plane plowed into the ground 300 yards from the nearest spectators.
In October of 2000, again it was only the pilot killed, when the Russian-made Sukhoi 26X, spun out of control at the Telluride airport during an air show, crashed near the runway and burst into flames, killing pilot Kent Pfleider, of Grand Junction. 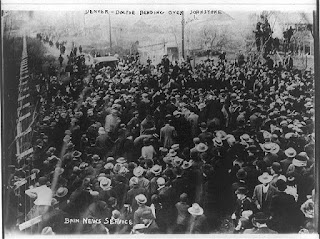 2. Denver doctor bending over and trying to save Ralph Johnstone on Nov. 17, 1910. He was the first American pilot to die in an airplane crash.